While many in the REDD+ community argue over whether project or national scale crediting is better, Cambodia is creating a system to enable both—recognizing that reversing deforestation requires both national policies and local actions. 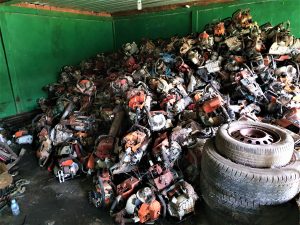 5 March 2020 | We didn’t expect a junkyard in the jungle, but that’s what we found: chainsaws – hundreds of them – piled high, along with old trucks, dozens of battered cars, countless motorbikes, and scores of giant, illegally harvested timbers. It had all been confiscated by rangers working to protect the Keo Seima Wildlife Sanctuary, which is one piece of a massive effort to build a sustainable rural economy while saving and restoring forests in Cambodia.

In the mid-1960s, nearly three-quarters of Cambodia was covered by lush tropical forests that provided clean, reliable supplies of drinking water and resilience in the face of natural disasters. Then came the Khmer Rouge and a devastating civil war. As with other countries that experience civil unrest, the period that follows is, by necessity, focused on rebuilding the economy and reducing poverty. In Cambodia, this led to uncontrolled logging and agricultural expansion that resulted in one of the highest rates of deforestation, forest degradation, and forest fragmentation in the world. Today, forests cover less than half the country, much of which is heavily degraded.

Cambodia is making an effort to reverse these trends. In 2017, the country released its National REDD+ Strategy that aims to reduce annual deforestation by 2026 in half, while contributing to poverty alleviation. The strategy envisions implementing REDD+ (Reducing Emissions from Deforestation and forest Degradation, as well as enhancing carbon stocks) at the national level, but also enabling market-based REDD+ projects. Currently, there are four active REDD+ projects in Cambodia — three voluntary projects registered under the Verified Carbon Standard, and one developed under Japan’s Joint Crediting Mechanism.

The national government began taking steps to address deforestation in 2002, when it passed the Forest Law, establishing protected forests and community forestry. In 2008, it passed the Protected Areas Law, which established Protected Areas, including community protected areas. At the same time, however, by 2014, the national government had also granted to a number of companies over 2 million hectares of forest land—both production forest and protected areas—as Economic Land Concessions (ELCs). ELCs are long-term leases that include the right to clear forests for agribusiness development.1

In 2012, the government began exploring REDD+ as part of a larger reform effort that included a review of all ELCs and a moratorium on new ones after many were found to be non-compliant with the original agreements and the sub-decree that governed them. By 2017, the government had canceled ELCs on 400,000 hectares of forest – roughly 20 percent of the land under ELCs – and converted such land to social land concessions for poor households or placed them under forest rehabilitation through public-private-community partnerships.

Furthermore, in the past few years, the government has issued sub-decrees to create new national parks, such as the Prey Preah Roka and Prey Lang national parks, as well as the creation of biodiversity conservation corridors of nearly 1.5 million hectares for natural habitat conservation. Total land area under protection status has increased from 18% in 1993 to over 40% in 2018, but the country is struggling to fund that protection.

While national policies are critical to reducing deforestation, REDD+ projects also play a key role—particularly in a country with limited rule of law and little in the way of resources across administrative levels.

Last year we visited the Keo Seima Wildlife Sanctuary REDD+ Project in eastern Cambodia. During our visit to the ranger station at the entrance of the park, we were surprised by the number of vehicles and chainsaws—used for the felling and transport of illegal timber—that have been confiscated by the Forest Administration over the past years. We were also impressed by the sheer ingenuity of the traffickers in finding ways to transport illegal timber on small converted motorbikes.

Wildlife Conservation Society (WCS) has been working together with local authorities to protect the forest landscape for communities that depend on the forest as well as more than 60 endangered species. This is being achieved through supporting the government’s efforts towards protected area management, building the capacity of local communities to engage in the conservation of natural resources, and developing sustainable sources of finance to fund conservation and improve the livelihoods of local people.

Revenue gained from voluntary market carbon sales has financed the operational costs of protecting the Keo Seima Wildlife Sanctuary over the last three years—including support for local government salaries. The distribution of revenue is agreed upon between the government and WCS and provides support to communities to develop land use plans and clarify land tenure, provide financial management training to communities, and support law enforcement. This model is also at work in the Southern Cardamom REDD+ Project, which is also now fully operational under carbon-credit-generated revenue. After a long and difficult decade developing REDD+ in Cambodia, a truly sustainable finance model has emerged.

Currently, there are opportunities for Cambodia to receive finance for greenhouse gas mitigation performance at both project and national scales. At the national scale, the Green Climate Fund offers an opportunity for countries to receive payment for “REDD+ results”. At the same time, companies are increasingly willing to invest in, or buy carbon credits from, forest carbon projects.

In Cambodia, three forest conservation projects have raised over $11 million from contributions by companies from Europe, Japan, and the United States. Minister of Environment Say Sam Al has urged even greater participation in voluntary carbon markets—in order to boost natural resource conservation and local economic development through the sale of carbon credits.

But currently, the data and methodologies used by projects to claim carbon credits are not compatible with the way Cambodia measures national emissions performance for the forest sector. It’s critical that such mismatches are reduced—to allow both projects and the country to access results-based finance, as well as to organize carbon accounting for the Paris Agreement.

Last year, Cambodia decided to pursue a “nested system”. The goal of the system is to:

In order to develop a nested system, Cambodia is updating its national forest reference level and is exploring options on how to allocate the reference level to projects. This is one way to align emission reduction claims from projects with national scale GHG reporting, as it ensures that maximum GHG performance claims of the projects cannot exceed that of the country, i.e. ensuring the “sum of the parts equals the whole.” The core idea is to set baselines according to deforestation risk, incentivizing action where it is most needed.

Cambodia is also developing a regulatory framework for all GHG projects. Within that framework will be special rules and procedures for REDD+ projects, to ensure existing projects, as well as any new projects, are part of the nested system. The rules will also ensure that projects contribute to the national REDD+ strategy and national reporting on safeguards, and align benefit-sharing systems. It will also promote transparency and clarify carbon rights—making investments by the private sector into forest carbon projects in Cambodia more attractive.

Developing a nested system is not easy. It requires the cooperation of multiple stakeholders. We are confident, however, that a nested system will enable multiple financing opportunities and organize GHG accounting to ensure rewards are commensurate with the level of effort. Ultimately, the aim is to support Cambodia’s goals of reducing, and ultimately expanding, its forests to provide goods and services for the people of Cambodia while contributing to global climate mitigation.

Quentin Renard is a forest engineer with experience in forest ecology, forest resources assessment and sustainable forest management. Currently working as a REDD+ Technical Specialist for UNDP in Cambodia, Quentin provides technical advisory support to the Royal Government of Cambodia to move from REDD+ readiness to REDD+ implementation.

Chivin Leng is the Director of the Department of Geographic Information Services, in the General Directorate of Environmental Knowledge and Information of the Ministry of Environment. He is also the National REDD+/MRV Coordinator.

Jeff Silverman of Tetra Tech is the Senior Manager Sustainable Finance on the USAID Greening Prey Lang project in Cambodia where he supports the development of nested REDD+ in Cambodia.

Donna Lee is an independent consultant and advisor to governments, multilateral organizations, private companies and non-profit organizations. She is also supporting the government of Cambodia to develop a nested REDD+ system.