Worldwide, we’ve spent $20 billion since 2010 to save forests. Unfortunately, we’ve spent $777 billion to grind them into pulp or clear them for agriculture. The result? Deforestation rates are now 35 percent higher than they were in the first decade of the new millennium. 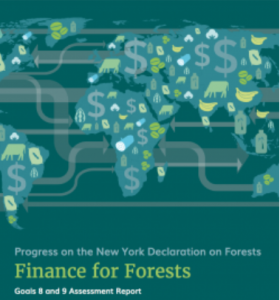 24 October 2017 | Three years ago, 52 multinational corporations endorsed the New York Declaration on Forests (NYDF), which is a cluster of pledges to slash deforestation 50 percent by 2020 – or just two years from now – and end it by 2030, while restoring millions of acres of degraded lands.

Fifty-six governments endorsed it, too, along with 53 environmental organizations and 15 indigenous people’s groups.

That’s great, because deforestation contributes at least 10 percent of all man-emitted greenhouse gasses, and ending it will get us one-third of the way to meeting the targets set by Paris Agreement.

So, how are we doing?

Deforestation has surged 35 percent since then, led by Indonesia and Brazil, according to Global Forest Watch, and one reason is money: $777 billion has flowed into unsustainable agricultural activities that grind forests into pulp or clear them for soybean farms, cattle ranches, or palm oil plantations since 2010, compared to just $20 billion for conservation and protection, according to NYDF Assessment Partners, which is made up of  NGOs, governments, and businesses charged with tracking progress towards the goals.

The news comes just one month after the partners identified 10 key activities that can be scaled up to slash deforestation in just two short years. One of those key activities is “Redirecting Finance Towards Deforestation-Free Supply Chains”.

“We have trillions in agricultural finance,” she said on the Bionic Planet podcast. “But the overwhelming majority of it is used in an unsustainable way.”

Some of that unsustainable finance comes through profit-seeking private investors, but most of it comes through government subsidies and development aid.

One of the most disturbing findings: of $167 billion in public-sector finance earmarked for combating climate change, only 2 percent — or $3.6 billion — went to forests.

“Forests hold so much potential in the effort to limit climate change, and yet there’s seemingly no end of money to fund activities that destroy them,” says Nathaniel Keohane, vice president for global climate at Environmental Defense Fund, one of the NYDF Assessment Partners. “We need to turn that equation around and invest much more in keeping forests standing than in cutting them down.”

For more on the 10 key activities that can slash deforestation, listen to episode 22 of the Bionic Planet podcast, which is co-produced by Ecosystem Marketplace publisher Forest Trends. You can access that on iTunes, TuneIn, Stitcher, or listen directly on this device here: