Most shoes are made of leather, while more and more shirts are made of cellulosic fibers derived from wood. Companies around the world are chopping down forests to make these products, accelerating climate change in the process. Here’s what some companies are doing to slow the process, and how you can support them. 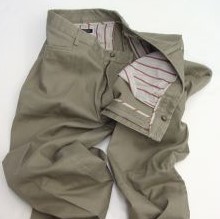 4 April 2018 | As I get dressed in the morning, I put on my Banana Republic polo, Gap khakis, Asics sneakers, and a Penguin jacket, but rarely do I stop to think about how my clothes and shoes were actually made. Taking a look through my closet, I notice so many tags labelled “made in China”, “made in India”, or “made in Vietnam”, but none say which farm or fabric mill created the raw materials, or which company hired the workers who stitched it together.

Nearly 97% of the garments sold in the United States are manufactured abroad, often under appalling working conditions that only began to change when consumers started voting with their wallets.

What most consumers don’t realize, however, is that the environmental costs of producing leather and wood-based “cellulosic fibers” used in so many of today’s clothes are just as appalling because they come at the expense of the tropical forests that are our first line of defense against climate change. That’s why apparel retailers like Inditex and H&M go out of their way to assure us that we can buy their products without worrying that our purchases are threatening pristine forests or endangered species.

But how do you know you can trust the assurances?

More than half the world’s deforestation comes from land-clearing for just four commodities: cattle, soy, palm oil, and timber and pulp.

Apparel companies have adopted extensive supplier codes prohibiting wood and pulp sourced from ancient and endangered forests, while rigorous product policies mandate that leather comes from tanneries that meet the requirements of the Leather Working Group, a standard-setting body that aims to promote sustainable leathermaking.

Some companies have published lists of the companies they buy from, but things get murky when they try linking to individual tanneries and ranches. The first two tiers within a supply chain are the most visible and easily traceable, but delving deeper into third, fourth, even fifth tier suppliers becomes challenging. In order to fully assess the impact of their supply chains, apparel companies need to achieve full traceability and hold all stakeholders within the supply chain accountable.

Inditex, Marks & Spencer, and Tiffany & Co. are leading the apparel industry in corporate social responsibility efforts. Working with hundreds of manufacturers and millions of workers across the world, these brands have formulated strategies to reduce their deforestation impacts by investigating and adjusting their supply chains.

Apparel companies have adopted a wide variety of policies for sourcing raw materials directly associated with deforestation. For example, ASOS, along with many other fashion retailers, has outlined wood and paper sourcing codes that prevent their products and packaging from including any fiber or pulp from endangered and protected forests.

H&M, the second-largest global apparel retailer, has published a map of their “first tier” suppliers (factories) that manufacture approximately 98.5% of their products. The map also lists their “second tier” suppliers (mills), which process 60% of the yarn and fabric provided to their suppliers.

Inditex, the largest fashion retailer in the world, is ensuring greater supply chain accountability by conducting thousands of audits a year to ensure that its suppliers are meeting corporate standards on environmental protection and responsible sourcing. In 2017, Inditex performed 2,776 traceability audits and discovered that 89% of audited suppliers were in compliance with its procurement standards.

Timberland, the major footwear brand, has also committed itself to improving its audits of leather tanneries. Collaborating with the Leather Working Group, Timberland is not only increasing their leather traceability efforts, but also ensuring that by 2020 all leather used in footwear production is ethically sourced from tanneries with a silver or gold LWG rating.

Full supply chain traceability, while necessary for abiding by procurement guidelines, is quite challenging. Take a minute to imagine your social circle and the people you know. It’s easy to think about your closest friends with whom you spend the most time; you genuinely know them well. Then there are friends of your friends, the people you’ve never actually met but are occasionally brought up in conversation. Lastly, imagine people who are another degree removed from you; you’ve never heard of them before.

For large apparel companies, engaging with their various stakeholders across the supply chain represents a similar situation. The apparel industry’s vast network of suppliers, factories, farms, and tanneries can be overwhelmingly complex, stretching from farms in Central American forests to production factories in Bangladesh to the high-end stores on Avenue Montaigne in Paris.

Achieving traceability to first tier suppliers is relatively straightforward because they are the major manufacturing facilities that consistently engage with the corporate office. These tier one suppliers are like your friends; you directly interact with them and know them well.

As you move  down to second tier suppliers, which often include tanneries and fabric mills, the relationships between these actors and the company become more distant. These are like the friends of your friends; you may have heard stories about them, but you’ve never actually met. While companies may still conduct audits and evaluations at this level, they merely serve as brief check-ins to evaluate whether suppliers are complying with standards.

Most companies don’t audit their suppliers further down the chain, but rather depend on their tier one suppliers to conduct routine checks on behalf of the corporate office. It’s like having your close friend vouch for the character and actions of their friend, whom you’ve never met.

Taking a look back at H&M for example, the company has only mapped out supplier mills that account for 60% of the fabric and yarn used in production. Well, what about the other 40%? How are those fabrics sourced, and from where? Perhaps these fabrics are sourced from smaller mills that are harder to track and audit because they lie on the periphery of the supply chain network. Auditing and evaluating the entire supply chain is an ongoing process that requires consistent updates and improvements to ensure that all stakeholders are operating under the same standards.

To answer the urgent calls for increasing environmental sustainability within the fashion industry, leading apparel retailers have launched several initiatives to increase the transparency and traceability of their supply chains.

ASOS, for example, is committed to evaluating their supply chain beyond the first two tiers. The company is completing the map of tier 3 suppliers and publishing updates every two months. ASOS has also rolled out a new mapping system to record supplier relationships and performance measures. These improvements will aid the company’s efforts in partnering with the Canopy Style Initiative to identify the country of origin for all of its cellulosic fibers and avoid sourcing from ancient and endangered forests.

Some apparel companies take a different approach by requiring suppliers to report on their performance. For example, Levi Strauss requires its forest-product suppliers to submit annual performance reports outlining their compliance with the company’s Sustainable Forest Product Procurement Policy.

Other retailers are taking a more hands on approach by launching training programs designed to teach suppliers about responsibly sourcing deforestation free commodities. Tiffany & Co. partners with the Rainforest Alliance to train their staff and suppliers on the company’s responsible sourcing expectations; specifically addressing their global deforestation plan and their preferred certification standards for wood based products.

Some major apparel brands have also introduced comprehensive policies to help suppliers who fail to meet environmental standards achieve full compliance. Clarks International, an international shoe retailer, has outlined a detailed Corrective Action Plan to deal with issues of non-compliance from supplier factories. In doing so, Clarks helps suppliers to adopt improvements that comply with corporate environmental and human rights regulations. Rather than simply terminating their relationships with non-compliant suppliers, apparel companies are collaborating with their suppliers to improve their operations and shift the entire fashion industry towards more environmentally sustainable production.

It’s hard to imagine that the t-shirt in my closet began its life halfway around the world on a plantation in Vietnam, or that the leather in my shoes came from cattle on a Brazilian cattle ranch some 4,000 miles away from my home.

While current efforts in reducing environmental impacts and increasing supplier transparency are substantial, the leading apparel companies are building upon these initiatives and launching new strategies and objectives to deploy for the coming years.

As Jeffrey Hogue, the chief sustainability officer at C&A Global, wrote in his annual letter: “If our customers and their families could look and feel good, whilst doing good, if every piece of clothing made ensured that people were treated with dignity and respect, and if the environment was protected and eventually restored…this is our vision for a better future in the apparel industry.”

We’ve seen the rise of rigorous policies protecting our forests, extensive supplier maps, and corporate sustainability boards in the past few decades. Sustainable, ethical fashion is becoming the new norm.

Consumers play a major role in this conversation about sustainable fashion; they have become more conscious about their purchases by demanding responsible apparel. Students and researchers, like myself, add to this discourse by learning about corporate sustainability initiatives. I find the research I’m doing with Forest Trends is helping me make better decisions when buying my clothes, and I look to use this knowledge to help influence other consumers as well. Together, we all have an important role to play in striving to redefine the fashion industry and ensuring that we value both human rights and the natural world.

Daniel Zhu is a second year UC Berkeley student intending to study environmental policy and economics. He can be reached at [email protected]