Brazil’s people and economy would benefit greatly from halting forest loss, says Steve Schwartzman of the Environmental Defense Fund. Here, he explains why stopping deforestation in the rainforest nation is critical and the policy change needed to make it possible. 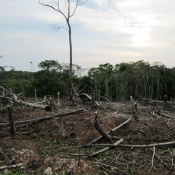 This article was originally posted on the Environmental Defense Fund blog. Click here to read the original.

12 October 2015 | Brazil’s climate pledges in advance of the Paris negotiations were significant because it is one of the world’s most important emerging economies, and it’s taking on an absolute, economy-wide emissions reduction target. But, its related goal of achieving zero illegal deforestation in the Brazilian Amazon by 2030 is widely regarded in Brazil as lacking in ambition.

Stopping deforestation, which formerly accounted for about 70% of Brazil’s emissions, would be good for Brazil, good for Brazilian agriculture, and supported by a large majority of Brazilians. It is also doable. Here are three reasons why, and a look at how Brazil could make such policies work.

Brazil succeeded in reducing Amazon deforestation by more than 80% since 2005 while maintaining robust growth in beef and soy production. There are at least about 56,000 km² of degraded cattle pasture in the Amazon that can be reclaimed for agriculture, as well as ample scope for intensifying cattle raising and improving yields, freeing up even more land.

Agriculture and land-use scientist Bernardo Strassburg argues that by increasing average productivity of pasture in Brazil from the current 30% of its potential to about 50%, Brazil could meet all new demand for commodities until 2040 with no new deforestation. The benefits to smallholders would be also important, considering the already deforested area (12.7 million hectares) available for agriculture expansion in rural settlements. With appropriate technical assistance and credit smallholders could produce more food (smallholders account for 80% of food production in the Amazon) with less deforestation.

In May of this year, the governors of the nine Amazon states sent President Rousseff a letter calling on the federal government to engage with states on designing an equitable and effective incentive policy for reducing deforestation. Amazon states see huge potential in creating real economic value for reducing deforestation and protecting standing forest.

Mato Grosso’s Governor Pedro Taques said two weeks ago that he thinks his state – which produces 27% of Brazil’s soy, 25% of its corn and 19% of its beef – has room to grow its economy till the cows come home with no new deforestation. In a workshop we attended with the Brazilian and Norwegian Ministers of Environment, the governor said his state has 60% of its native vegetation cover remaining – and 16 million hectares of already cleared land where agriculture can expand. Mato Grosso was responsible for around 50% of deforestation reduction between 2005-2013.

Pará, another agricultural powerhouse, has adopted an 80% deforestation reduction target by 2020, and zero net deforestation thereafter.

Even with extremely limited international or federal support, Amazon states are moving forward with a low-carbon growth agenda. Acre state, for example, retains about 88% of its original forest cover and is already implementing the most ambitious and successful system of payment for environmental services in the tropical world focusing on forest conservation.

Zero illegal deforestation by 2030 is a considerably less ambitious goal than many Amazon states have proposed.

3) Let it rain: If deforestation continues, it will cause devastating environmental damage in the Amazon and beyond

Deforestation causes climate change on a global scale, and is responsible for about 15% of the world’s greenhouse gas emissions. However, since the Amazon forest is, in Antonio Nobre’s words a massive “biotic pump” that cycles trillions of tons of water through the atmosphere, producing about half of the region’s rainfall, large-scale deforestation could affect rainfall regimes at local and much larger scale.

Recent analysis also shows that tropical deforestation will affect global rainfall patterns, and consequently agriculture, finding that continued deforestation is likely to interfere with and reduce rainfall patterns in the Amazon and far beyond, compromising agricultural production and potentially leading to large-scale transformation of forest into savanna.

Of course for the global atmosphere, commitments are fine, but what matters is what actually happens.

This raises the question of how President Rousseff, in the midst of an acute economic and political crisis, proposes to pay for these policies. Some of these policies may have zero cost (e.g., energy efficiency) or high economic returns (pasture intensification), but others, such as restoration of degraded lands, will cost.

The government has made no progress in regulating or funding mechanisms or programs that could generate the necessary money. For example, Brazil’s National Climate Change Policy called for the creation of a Brazilian Emissions Reductions Market. And Brazil’s Forest Code includes a list of placeholders for positive economic incentives for reducing deforestation and restoring degraded areas, as well as a provision for a market in forest reserves (Cotas de Reserva Ambiental).

Here in lies the biggest opportunity of all: use Brazil’s emissions reductions to generate the money to carry out its climate commitments.

Here in lies the biggest opportunity of all: use Brazil’s emissions reductions to generate the money to carry out its climate commitments.

Here in lies the biggest opportunity of all: use Brazil’s emissions reductions to generate the money to carry out the climate commitments.

With its 3.2 billion tons of carbon dioxide emissions already reduced in the Amazon over the past decade, and the potential for reducing about another 2.4 billion tons below current levels nationwide by 2020, Brazil would have ample scope to take its own target and create a Brazilian Emissions Reductions Market, and offer the international community low-cost, high quality emissions reductions in exchange for increased ambition from other major emitters.

That would create the revenue stream needed for restoring degraded lands, compensating those with legal rights to clear, and funding the almost half of the Amazon that is indigenous territories and protected areas.

Brazil’s target, on balance, is good for the international climate negotiations. And, Brazil has a chance to do much more for the planet by doing better for itself.

Steve Schwartzman is the Senior Director of Tropical Forest Policy at the Environmental Defense Fund. This post was co-authored by Paulo Moutinho of the Amazon Environmental Research Institute (IPAM).