Article 6 of the Paris Agreement governs international carbon markets, and a new text for implementing it has been promised for Friday morning – even as negotiations, originally scheduled to end then, have been extended through to the weekend. 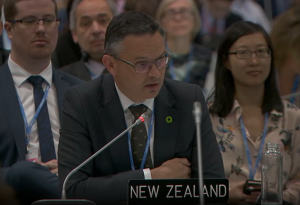 12 December 2019 | MADRID | New Zealand Environment Minister David Parker had his game face on today, as did South African Environment Minister Barbara Creecy. They’ve taken on the challenge of forging agreement on how international carbon markets should operate under the Paris Climate Agreement, and Parker delivered an optimistic update on negotiations at today’s early afternoon stocktaking around implementing Article 6 of the Agreement, which governs international carbon markets.

Talks have stalled over how to implement Article 6, as we’ve covered here, here, and here.

Parker outlined several objectives that parties had agreed on, but they were objectives that no party has ever disputed – such as the need to reach a “mutually-acceptable outcome,” the need to ensure environmental integrity in NDCs, and the need to “find predictable and adequate resourcing for adaptation.”

He promised a new text on Friday morning, and we’ll provide an update as soon as it emerges.

Technical Phase of Climate Negotiations Ends With No Agreement on Markets