Technical negotiations around the creation of international carbon markets have wrapped up in Madrid, leaving a mess for the high-level phase of talks that begins Tuesday. 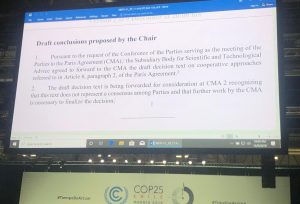 9 December 2019 | MADRID| UPDATED 23:15 CET | Think of year-end climate negotiations under the United Nations Framework Convention on Climate Change (UNFCCC) as a massive collaborative writing project with nearly 200 writer/editors from different cultures speaking different languages, yet somehow managing to reach agreement on critical issues that will determine the fate of our civilization — or not, as is the case tonight, when negotiators in the first phase of year-end talks failed to reach agreement on the contentious issue of how to implement carbon markets, which are dubbed “cooperative approaches” in the UNFCCC.

“The draft decision text is being forwarded for consideration at CMA 2, recognizing that this text does not represent a consensus among Parties and that further work by the CMA is necessary to finalize the decision,” they wrote on a massive Word document shimmering above the plenary room at the Feria de Madrid, where talks were moved after riots forced them out of this year’s host country, Chile.

Year-end climate negotiations are broken into two phases: a “technical” phase that ends today and a “political” phase that begins tomorrow, when ministers and secretaries arrive for “CMA 2,” which is the second meeting of the Parties to the Paris Agreement.

It’s now up to Chile, as the official host of this year’s meeting, to hammer out an agreement or punt to next year’s talks in Scotland.

The Two Phases and the Breakdown

In the technical phase, negotiators operate within narrow parameters established by their governments to create a clean negotiating text that they pass to higher-level negotiators, who then have more leeway to make compromises.

On Saturday, negotiators operating within a negotiating track called the Subsidiary Body for Scientific and Technological Advice (SBSTA) released draft texts of two key paragraphs related to Article 6, which governs markets — specifically, paragraphs 6.2  and 6.4. The paragraphs were panned as too messy to pass up to higher-level negotiators who comprise the Conference of the Parties (COP). This year’s talks represent the 51st meeting of SBSTA (SBSTA 51) and the 25th meeting of the COP (COP25).

“Everyone is restating their old positions,” said one exasperated negotiator, speaking on condition of anonymity. “It doesn’t look good; too many red lines have been crossed.”

Some of the issues — such as how prescriptive the rules for social safeguards should be — were decades old. Several countries, mostly in the developing world, have long argued against strict human rights rules, which they say merely duplicate existing protections and will overload the mechanism by imposing a cumbersome bureaucracy. Other countries, mostly in the developed world, argue such fears are overblown.

Then there are newer issues that emerged with the advent of the Paris Agreement, and the list is intimidatingly long: how to deal with countries that choose to measure their environmental progress in something other than greenhouse-gas emissions (such as, for example, new kilowatt-hours of renewable energy); how to account for internationally-transferred emission-reduction units; whether countries can use international offsets to meet their existing climate action plans (technically called “NDCs”, or “Nationally-Determined Contributions); whether to tax internationally-transferred emission reductions to finance adaptation; how to recognize carbon sinks; how to account for emission-reductions that pass into the Carbon Offsetting and Reduction Scheme for International Aviation (CORSIA, an emerging compliance system for offsetting emissions from international air traffic); and — most contentious of all — what to do with old offsets generated under the Kyoto Protocol’s Clean Development Mechanism (CDM) and whether to allow some double-accounting for developing countries in the early phases of the new mechanism.

If no agreement is reached, markets can theoretically develop under the Katowice Agreement, but developing countries would likely lack the bandwidth to participate or to influence what wealthier nations trade with each other.

That disconcertingly long list explains why the issue of carbon markets is the only major part of the Paris Agreement not finalized at COP24 in Katowice, Poland. Markets are enshrined in Article 6, which doesn’t actually use the word “markets”. Instead, it says countries can use internationally-transferred emission reductions to promote activities that cut emissions deeper than they pledged in their climate action plans (NDCs, for “nationally-determined contributions”), and it lays out two paths for creating these offsets, or “ITMOs” (Internationally-Transferred Mitigation Outcomes).

The first path, articulated in Article 6.2, lets countries generate ITMOs and link markets internationally, using UN-sanctioned rules of carbon accounting. It has already led to a proliferation of cross-border carbon-trading initiatives around the world, and these will continue even without inclusion in the rule book, with countries free to develop their own guidance on issues that the rulebook doesn’t address.

The second path, explained in Article 6.4 and championed by Brazil, creates a centralized mechanism within the UNFCCC called the Sustainable Development Mechanism (SDM). This is where the contentious issue of double-counting arose after Brazil said it wanted to exempt developing countries from existing rules that prevent double-counting by requiring countries that sell offsets to then deduce the emission-reductions from their own carbon inventories. Brazil says it will develop its own measure to prove they don’t double count, but other countries are skeptical.

With SBSTA failing to agree on a text, the COP Presidency, in this case Chile, will have the power to intervene and facilitate discussions towards a deal.

Jos Cozijnsen is a former climate negotiator who now acts as a consultant in the voluntary carbon markets.