The new strain of Coronavirus could kill 100 million people if not checked. It’s pretty horrible, but a new book on climate risk and “green swans” shows us how bad horrible can really get if we don’t act now to meet the climate challenge. 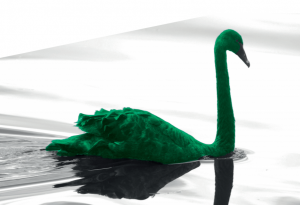 3 February 2020 | China’s stock market plunged 8 percent on Monday after a new strain of coronavirus shuttered half the country, including the factories of Ford, Apple, and Tesla. The country’s GDP growth is expected to fall by a third this quarter, and publications from the Financial Times to the Wall Street Journal have warned of economic contagion following in the virus’s path as disruptions in global supply chains translate into slower growth around the world, and that’s if we’re lucky. At current rates of contamination, the virus will infect a quarter of the world before it’s done, killing between 3 and 6 percent of those it infects, or between 60 and 120 million people.

We can’t say they didn’t warn us – “they” being experts like Tedros Adhanom Ghebreyesus, Director-General of the World Health Organization (WHO). He’s long said the world is ill-prepared for a global pandemic, and on Monday he used the outbreak to remind us that an ounce of prevention is worth a pound of cure.

“For too long, the world has operated on a cycle of panic and neglect,” he said. “We throw money at an outbreak, and when it’s over, we forget about it and do nothing to prevent the next one.”

We do the same with storm-ravaged cities after they’ve been pummeled for the third time in a decade by once-in-a-century hurricanes. We treat them as isolated natural disasters instead of interconnected unnatural events caused by the extra energy that greenhouse gasses have trapped in our atmospheric system – as much energy as four atomic bombs exploding every second, according to the latest emissions gap report.

Swans of a Different Color

The outbreak of coronavirus is what derivatives trader Nassim Taleb would call a “black swan,” which is a low-probability, high-impact event that disrupts financial markets and upends people’s lives. In his book by the same name, Taleb explains that Europeans long defined swans as white birds with long necks until they came upon black swans in Australia. The discovery of black swans forced a fundamental change in the definition of what constitutes a swan.

Climate change is a swan of a different color: a green one.  Green swans are risks we humans create for ourselves by pumping contaminants into our air and water, destroying our ecosystems, and destabilizing our climate. They’re different from black swans in that their inevitability increases predictably, even as the specific outcomes become less predictable and more dangerous.

The concept has been around for a while, but last week the Bank for International Settlements (BIS) published an e-book called “The Green Swan: Central Banking and Financial Stability in the Age of Climate Change,” which summarizes the thinking to-date and tries to offer ways that central banks can help address the risk (short answer: they can’t).

Published last Monday, the 115-page book offers a detailed but surprisingly readable summary of both physical risks (climate-induced unnatural disasters or the spread of disease) and transition risk (mass bankruptcies of companies that failed to adapt) as well as the ways banks have traditionally assessed both. It’s not for the faint of heart.

“Climate catastrophes are even more serious than most systemic financial crises,” the authors write. “They could pose an existential threat to humanity, as increasingly emphasized by climate scientists.”

Black Swans gunk up the financial system because banks and insurance companies use historical data to calculate risks, and historical data doesn’t account for the new variable.

“As a result, the standard approach to modeling financial risk consisting in extrapolating historical values…is no longer valid in a world that is fundamentally reshaped by climate change,” the authors write. “In other words, green swan events cannot be captured by traditional risk management.”

Risk managers, of course, aren’t stupid. Most have moved beyond historical modeling and begun incorporating more forward-looking scenarios into their planning. This, however, involves trying to figure out how complex systems like society are going to respond to other complex systems like an upended global ecology. There are just too many places where projections can run amok, as a 2015 paper called “Global non-linear effect of temperature on economic production” made clear. The authors, nonetheless, took a stab at it and concluded that the global economy will probably shrink by 23 percent in the next 80 years if we don’t fix the climate mess.

“Our key conclusion is that, despite their promising potential, forward-looking analyses cannot fully overcome the limitations of the probabilistic approaches discussed in the previous chapter and
provide sufficient hedging against ‘green swan’ events,” the authors write. “Climate-related risks will remain largely uninsurable or unhedgeable as long as system-wide action is not undertaken.”

If it sounds like you’ve heard this before, you probably have. After all, economists have been pondering climate risks since long before Nicholas Stern published his exhaustive 2006 “Stern Review on the Economics of Climate Change.” That 700-page analysis dove deeper and more exhaustively into the state of things back then, and it pegged the cost of cutting emissions at 1 percent of GDP if we started acting at the time, while the cost of letting emissions rise would be 20 percent.

If one theme is clear in all of these analyses, it’s that adaptation is not an option. The only way to confidently address the climate challenge is to reverse it, and quickly. Every penny we spend now will amount to a fortune saved for our children.