The Paris Climate Agreement aims to keep global temperatures from rising more than 1.5°C, but current pledges will let them soar 3.2°C. By waiting so long to fix the mess, the cost of fixing it is now somewhere between $1.6 trillion and 3.8 trillion per year, according to the UN’s latest Gap Report, which is published every year ahead of global climate talks. 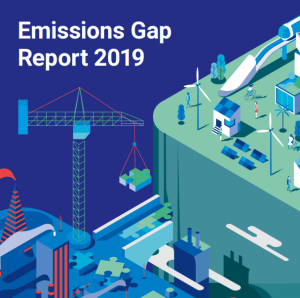 26 November 2019 | One week before negotiators from around the world are to gather in Madrid for a year-end summit to beef up commitments under the Paris Climate Agreement, the United Nations Environment Programme (UNEP) and the World Meteorological Organization (WMO) says decades of foot-dragging have increased carbon dioxide concentrations 50 percent above where they were before the Industrial Revolution and raised the cost of meeting the Agreement’s 1.5°C target to somewhere between US$1.6 trillion and US$3.8 trillion per year.

Tragically, moving slowly is all we’ve been doing , according to UNEP’s latest annual Emissions Gap Report, which draws on WMO data and is published on the eve of global talks to identify the gap between current pledges and actions and where we need to be.

The WMO’s Greenhouse Gas Bulletin found the global average concentration of CO2 had reached 407.8 parts per million in 2018, which is 50 percent higher than in 1750.

“It is worth recalling that the last time the Earth experienced a comparable concentration of carbon dioxide was three to five million years ago,” said WMO Secretary General Petteri Taalas . “Back then, the temperature was two to three degrees Celsius warmer, and sea level was 10 to 20 meters higher than now.”

In terms of heat trapped – or “warming potential” – the increase from methane represents more than a doubling from pre-industrial levels. Methane comes from fossil fuels, but also ruminants like cows and sheep, as well as rice paddies and melting permafrost. Because of its higher warming potential, methane now accounts for 17 of global warming.

Total greenhouse-gas emissions is 55.3 billion metric tons of CO2 (“GtCO2e” for “gigatonnes of carbon dioxide equivalent”) in 2018, which is 32 GtCO2e per year higher than the maximum we can afford to be averaging in just ten years if we’re to meet the 1.5°C. That translates into a drop of 7.6 percent annually over the next decade.

A gentler cut of 2.7 percent might help us meet the Paris Agreement’s initial 2°C goal, but global scientific consensus, in the form of detailed summaries compiled by the Intergovernmental Panel on Climate Change (IPCC), tells us that goal won’t avoid catastrophe.

Economists agree that the most effective way to reduce emissions is to put a price on carbon, and the World Bank recently found that nearly 20 percent of global emissions – or 11 GtCO2e – are now covered by carbon markets. Ecosystem Marketplace is slated to publish its latest State of Voluntary Carbon Markets report in Madrid next week, and the report is expected to show steep growth in those markets as well.

A staggering 78 percent of all emissions come from the Group of Twenty Industrialized Nations (G-20), but only five of those countries have committed to a timeline for net-zero emissions.