Everything, it seems, comes from the rainforest – from the leather in your shoes to the wood fibers in your flannel shirt. Some are harvested sustainably, but many aren’t – and until recently, it was nearly impossible to tell the difference. Here’s why that’s changing, and how you can accelerate the process. 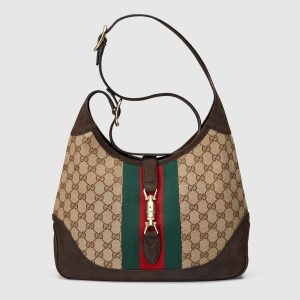 17 December 2016 | Have you seen Gucci’s retro “Jackie” bags, patterned after one of Jackie Kennedy’s favorites?

They’re not only lovely, but they’re made of “deforestation-free” leather.

That’s a pretty big deal, because cattle ranchers are chopping forests by the football field to produce beef and leather, which is one reason agriculture generates almost 30% of all greenhouse-gas emissions worldwide.

In the past decade, scores of companies have committed to delivering “deforestation-free” commodities, and some are already making good on their promises, while others seem to be making an honest effort to do so.

But clothing also comes at the expense of trees, as Canadian boutique owner Cathy Reid recently found after receiving a holiday shipment of nightgowns.

“Some of the nighties are classic cotton flannel,” she wrote on her blog. “Others are silky fabrics, soft and cozy, perfect for the cooler nights in November.”

But then a customer read the label, and found they contained something called “rayon”, which Reid soon learned is a “cellulosic fiber” made of trees.

Such fibers are more common than you’d think, and they’re supposed to be more environmentally-friendly than cotton, that ravenous vampire plant that sucks the life out of soil.

That eco-friendliness, however, is questionable – and you, as a conscientious consumer, have the power to find the answers.

Logging for timber and pulp – which includes cellulosic fibers – is the third-leading driver of deforestation around the world, and cattle ranching – which generates leather – is number one. These, together with soy and palm, comprise the “big four” forest risk commodities responsible for most of the world’s tropical deforestation – and until recently, it was nearly impossible to know if your holiday shopping was contributing to the problem.

That started to change when manufacturers like New Balance and Louis Vuitton, as well as retailers like Inditex/Zara and C&A, started promising to chop deforestation from key commodity supply chains. Then NGOs like CDP (formerly the Carbon Disclosure Project) started rating companies based on their commitments. Last year, the Forest Trends Supply Change project started tracking the progress that companies report toward achieving those commitments – providing in the process a fascinating glimpse into the complex, interlocking global supply chains that stretch around the world, involving cattlemen and loggers, as well as subsistence farmers and indigenous people who harvest the commodities we buy as leather, linen, and lipstick.

Supply Change monitors hundreds of companies from around the world and across the industrial spectrum, but just 26 of these are shoe and apparel companies, and only 22 of these have promised to reduce their impact on the world’s rainforests.

That’s roughly 85% of the companies profiled by Supply Change in this sector, and almost all of those have made more than one promise – meaning that the 22 companies have generated more than 40 pledges.

Fourteen of those pledges apply to packaging – which many companies (and everyone who recycles) has committed to doing right – while just seven of them apply to clothing made with wood fiber fabrics.

By contrast, 16 apply to leather.

Those differences are no coincidence: environmentalists have been campaigning for recycled packaging since the 1960s, and many are just now waking up to cellulosic fibers. Things can, however, move fast – as we learned with leather.

Responding to the Critics

In 2009, Greenpeace built a campaign around evidence connecting deforestation in the Amazon with cattle products sold to many large public-facing brands. This set off a ripple effect among buyers and suppliers alike, and New Balance immediately committed to stop buying shoe-leather from suppliers in the Amazon biome. ASOS, Coach and Eram Group followed a few years later.

On the cellulosic fiber front, an NGO called Canopy launched the Fashion Loved by Forests campaign, and scores of retailers and manufactures vowed to steer clear of wood products from ancient and endangered forests.

Those consumer-facing companies, however, are at the mercy of suppliers, and Canopy says that the ten largest suppliers, responsible for about 75% of global supply, are just beginning to set and implement their own sustainability commitments. Fortunately, the two largest, Aditya Birla and Lenzing, are close to wrapping up their first desktop audits of global operations. They make up around 35% of global supply and received highest scores in Canopy’s first update on viscose producers and forests.

Frustratingly, companies are only reporting progress on about half of commitments for companies in every sector tracked by Supply Change, and clothing retailer Inditex/Zara is one of those that hasn’t reported any measurable progress on its clothing commitment so far – perhaps because it’s waiting for suppliers (like Lenzing) to provide traceability.

When clothing companies decide to purge deforestation from their supply chains, they face the same challenge that we, as individuals do: namely, where to begin? After all, very few apparel companies produce their own raw materials. Instead, they’re consumers themselves, and they tend to go through predictable stages of improvement.

First, they promise something along the lines of making sure that all of their leather is “deforestation-free” by 2020.

Then they scramble to find out where in the world their leather comes from – which involves mapping transactions between ranchers, slaughter houses, packing companies and finally traders.

Each of these approaches break down further – some companies aim to restructure their entire supply chains, one supplier at a time, while others turn to existing certification programs. Stella McCartney brand products even use vegan leather.

A disturbing number, however simply go silent – and, indeed, of the 24 wood-related commitments tracked by Supply Change, only 11 have any reported progress. On the leather front, progress reports are available on 12 of 16 commitments.

Once they implement a strategy, they establish procedures for monitoring progress; and – if they’re serious – they look for independent third parties who can do it for them.

Many companies, erring on the side of caution, only make commitments they’re confident they can achieve – like making sure commodities are traceable to the region, mill or tannery they came from, and ideally to the ranch or plantation. Even that, however, can be a monumental task.

Most of the apparel companies Supply Change tracks do intend to trace their leather supply, and a few, like New Balance and Coach,  require all their suppliers to submit signed assurances that their cattle doesn’t come from the Amazon. Coach says its suppliers have done so.

Similarly, H&M requires signed partner agreements to ensure compliance with its Business Partner requirements for both its wood and leather commitments, and its going one step further for its commitment on cellulosic fiber by working with suppliers to make their own CanopyStyle Pledges.

That raises another question: can the suppliers be trusted?

Scores of companies are embedding environmental and social issues into their procurement guidelines, and some – like Adidas – are hiring third parties to audit all direct suppliers and making it clear that non-compliance could terminate the contract. A few, like Puma (owned by retail giant Kering) are even providing funds to help suppliers meet their environmental standards.

Other initiatives go even further – and do so in ways that promote real change on the ground.

It’s Fashionable to be Certified

When companies abandon high-risk areas, they often fix their own problem but drive poverty and desperation in the places left behind, according to Rosa Maria Vidal of the Governors’ Climate and Forests Fund.

Roughly 20% of all wood products are certified under either the Forest Stewardship Council (FSC) or Program for the Enforcement of Forest Certification, but certification efforts only began to seriously consider wood fabrics three years ago. As we saw earlier, only seven companies have committed to sustainably source wood fibers embedded in their clothes, and none of them have reported progress.

In leather, the certification of choice is the Leather Working Group (LWG), which audits companies to make sure their leather isn’t associated with deforestation in the Brazilian Amazon biome – making them, in essence, an audited version of the independent commitments made by New Balance, Coach, Eram Group and ASOS. Roughly half of all leather commitments are tied to the LWG, which has already audited more than 14% of leather production.

All of the companies building pledges on LWG certification are reporting progress, ranging from 15% for H&M to around 100% for Nike and Timberland.

These consumer-facing companies rely on LWG-certified tanneries like Couro do Norte, which in turn use lists of bad actors published daily by government agencies and non-profits to keep suppliers honest.

Brazil’s three largest meatpackers – JBS, Marfrig, and Minerva – also supply the leather sector, and they use the same monitoring systems while also publishing third-party audits of their procurement.

All of these efforts are helping to push these hidden supply chains out into the open, across all commodities, so that – hopefully – products like Gucci’s bag will become the norm rather than the exception that proves the rule.

What Can I Do?

Until that day arrives, you can follow the example set by Cathy Reid’s inquisitive customer and ask your own retailers where their clothes come from. Most probably won’t be able to answer, but those questions do filter up. Here’s a list to get you started:

Take care this holiday season, and remember to read the fine print, because not all gifts may be as caring and thoughtful as you might think when their sources are tainted by deforestation and exploitation.

We offered a deep dive into the growing move for “radical transparency” in supply chains on the Bionic Planet podcast, which you can subscribe to on iTunes, TuneIn, Stitcher, and elsewhere. Or listen here: