The UN’s latest Emissions Gap Report says net greenhouse gas emissions will have to fall by 60 percent in just ten years to prevent temperatures from rising to cataclysmic levels. The news came as US President Donald Trump vowed to withdraw his country from the Paris Climate Agreement. Now former US Secretary of State John Kerry has announced an initiative of its own. Dubbed “World War Zero”, it has plenty of star power but little yet in the way of publicly-available details. 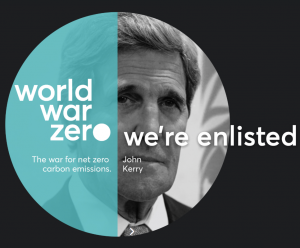 1 December 2019 | As year-end climate talks kick off in Madrid, Spain, former US Secretary of State John Kerry is launching an initiative called “World War Zero,” which brings moderate Republicans like former governors Schwarzenegger of California and John Kasich of Ohio together with former Democratic presidents Bill Clinton and Jimmy Carter and Hollywood actors like Leonardo DiCaprio and Ashton Kutcher to engage more Americans in the global climate challenge.

The initiative launched quietly on Sunday, one day before the 25th Conference of the Parties (COP25) to the United Nations Framework Convention on Climate Change (UNFCCC) kicks off in Madrid and just a few days after the UN’s Emissions Gap Report showed that current pledges and progress are nowhere near deep enough to prevent global temperatures from rising to a level 1.5°C (2.7°F) above preindustrial levels.

“We’re going to try to reach millions of people, Americans and people in other parts of the world, in order to mobilize an army of people who are going to demand action now on climate change sufficient to meet the challenge,” Kerry told The New York Times, which broke the story.