Microsoft says it will suck more greenhouse gasses from the atmosphere than it’s ever emitted, and environmental bad boy BlackRock says it’s flipping from amoral greed to green greed. There are reasons to believe them both. 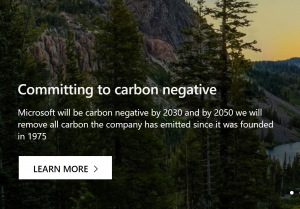 17 January 2020 | Asset-management group BlackRock made headlines around the world on Tuesday when it said it would redirect its seven-trillion-dollar war chest away from climate-changing investments and into climate-saving ones. Two days later, it was Microsoft’s turn in the limelight. On Thursday, the software giant said that by 2030 it will be sucking more greenhouse gas from the atmosphere than it emits, and that by 2050 it will have pulled more of the stuff out of the air than it’s ever put into it over what will then be 75 years of manufacturing and energy use.

“This is getting real,” says environmental scientist Jason Funk, who runs the Land Use & Climate Knowledge Initiative (LUCKI). “It would send a powerful signal if Microsoft invested in the world’s oldest form of carbon removal: natural forests, which deliver an incredible array of additional benefits.”

Natural forests, it turns out, have been a big part of Microsoft’s carbon removals strategy for almost a decade, but the company looks to be pinning its future on unnatural ones – or, more specifically, on “afforestation” (planting trees where forests either never existed or haven’t for a long time) and “reforestation” (planting trees where forests have recently been destroyed), for reasons that I’ll loop back to below, but which aren’t quite clear.

I’ll start with the positives.

In a detailed but very readable blog, company president Brad Smith outlines a 30-year carbon removal strategy that blends direct reductions like those achieved by shifting to electric vehicles and renewable energy with removals that offset emissions by planting trees or investing in new technologies that suck carbon from the atmosphere. Impressively, the company isn’t just offsetting its own residual emissions, but “scope 3” emissions as well. These are emissions that suppliers and consumers generate, and they’re often higher than those emitted in the manufacturing process.

Discouragingly, however, the company gives short shrift to programs that increase removals by saving endangered natural forests (“REDD+”, for “reducing emissions from deforestation and deforestation, plus enhancement of carbon stocks”).

Unlike BlackRock, Microsoft isn’t a newcomer to the climate challenge or to carbon offsetting. The company has always recognized the validity of climate science, and it began experimenting with offsetting in general and REDD+ in particular nearly a decade ago, when it started investing in projects that save endangered forests in Madagascar and elsewhere.

Smith, however, seems to see REDD+ as part of the company’s past and not its future. (I’ve asked Microsoft for clarification, and may revisit this.)

“One way to avoid a reduction in emissions is to pay someone not to cut down the trees on the land they own,” he writes. “This is a good thing, but it…doesn’t lead to planting more trees that would have a positive impact by removing carbon.”

The debate over reductions vs removals is an acrimonious one, and Smith’s characterization of REDD+ as merely a reduction and not a removal is sure to rankle forestry proponents. Living forests, after all, do remove greenhouse gasses from the atmosphere, and it can take decades for newly-planted saplings to absorb as much carbon as an established forest emits when it’s destroyed.

Still, Microsoft has earned credibility as a company that uses offsets strategically to accelerate real reductions, as Ecosystem Marketplace’s past analyses of carbon offset buyers shows. The company was, for example, one of the first to implement an internal price on carbon and to charge its internal divisions for the greenhouse gasses they emitted.

“This can incentivize divisions to find emissions reductions opportunities at their source while also raising a pot of money that can then be reinvested – sometimes in offsets,” wrote Allie Goldstein in 2016’s “Buying In: Taking Stock of the Role of Offsets in Corporate Carbon Strategies.”

BlackRock’s announcement may actually have a greater long-term impact – in part because of the company’s size, but also because of its history as a smooth-talking but poor-acting environmental scofflaw.

“If you felt the earth tremble a little bit in Manhattan on Tuesday morning, it was likely caused by the sheer heft of vast amounts of money starting to shift,” wrote Bill McKibben in the New Yorker. “By one estimate, there’s about eighty trillion dollars of money on the planet,” he continued. “If that’s correct, then BlackRock’s holding of seven trillion dollars means that nearly a dime of every dollar rests in its digital files.”

To put that into perspective, Ecosystem Marketplace identified a total of $8 billion in growth-oriented conservation finance and another $8.7 billion in government-funded conservation finance worldwide in 2016, and BlackRock’s $7 trillion under management is 875 times that. The amount invested in good behavior has certainly increased along with growing awareness of natural climate solutions, but the money flowing into the destruction of forests is still nowhere near the nearly $500 billion flowing into activities that destroy forests.

In his letter to CEOs, BlackRock CEO Larry Fink made it clear it was shifting assets for the good of its investors, and not for the benefit of the planet.

The company, in other words, isn’t shuffling its investments to change the world; it’s shuffling them because the world is changing, and for the best. Let’s just hope it isn’t changing too late.