Agricultural subsidies worth at least $486 billion per year dwarf the $8.7 billion total committed to avoiding deforestation in tropical countries, a new working paper by the Overseas Development Institute finds. 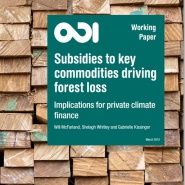 6 April 2015 – The race against deforestation is being won or lost hectare by hectare in the tropical rainforest countries that also provide the majority of the world’s agricultural commodities. But subsidies for commodities that drive deforestation may be undermining the efficacy of financial incentives for conserving forests and their carbon content, according to a new working paper by the Overseas Development Institute (ODI), a United Kingdom-based think tank.

Agricultural subsidies worth at least $486 billion in 2012 dwarf the $8.7 billion total that developed countries have committed towards Reducing Emissions from Deforestation and Degradation of forests (REDD+) since 2006, the report finds. However, financial incentives for avoiding deforestation would be much more effective if countries address the heavyweights on the other side of the scale, the researchers, Will McFarland, Shelagh Whitley and Gabrielle Kissinger, argue.

“Instead of raising the cost of GHG (greenhouse gas) emissions or penalizing activities linked to forest loss and degradation, the balance of government support is in the form of subsidies to the production and consumption of the key commodities that are driving forest loss,” they write.

Alongside population growth and rising incomes, global appetites for deforestation-driving commodities – namely beef, soy, palm oil, and timber – is set to expand over the next few decades, according to research by Forest Trends, Ecosystem Marketplace’s publisher. Agriculture accounts for 70% of deforestation in tropical countries.

The economic signals for clearing forests to make way for agricultural commodities are strong. Brazil is the world’s largest beef producer, with exports contributing $7 billion to the economy – 3% of total export income. Soy covers more than a third of Brazil’s arable land and exports to China, the European Union, and elsewhere earned $26.2 billion in 2010. In Indonesia, palm oil covers a fifth of agricultural land and exports reached $17.6 billion in 2012, with timber contributing another $10 billion.

As the top two deforesters in the world by land area cleared annually, Brazil and Indonesia are ground zero for figuring out how REDD+ financing can work with existing policies. Deforestation currently accounts for up to a fifth of global GHG emissions and preventing further deforestation is one of the most effective levers to pull to mitigate climate change in the short term, according the United Nations Framework Convention on Climate Change (UNFCCC).

Expanding cattle pastures and soy fields are the main drivers of deforestation in Brazil. In Indonesia, it’s palm oil and timber plantations that are encroaching on forests.

Governments have various motivations for putting subsidies in place, the ODI study finds. Subsidies may aim to ensure food security, create energy security by encouraging homegrown biofuel production, or serve as temporary buffers against commodity price shocks. But once in place, subsidies are difficult to remove – even if they have outlived their original purpose. Interest groups that benefit from subsidies lobby for their persistence, and governments often keep subsidies in place to garner political support, the researchers find.

Subsidies may accelerate environmental degradation in various ways, the ODI paper argues. They may draw more investment to industries such as beef and palm oil than the market would otherwise support. They may lower the cost of consumption of agricultural products, leading to overconsumption. They may remove incentives for natural resources industries to operate efficiently. And, if commodities are sold below market price, they may deprive domestic governments of tax revenue that could otherwise be invested in enforcing conservation regulations.

The working paper identifies eight beef and 16 soy subsidies in Brazil and 19 soy and 10 timber subsidies in Indonesia.

Brazilian cattle farmers have access to loans worth an estimated $218 million per year, and the below-market interest rates are credited with significantly reducing costs for producers. Brazilian soy growers have benefitted from about $540 million annual investment in roads, railways, and ports that help them get their product to market.

In Indonesia, developers benefit from about $800 million in annual concessional loans to develop commercial plantations for pulp and paper, with a government goal of establishing plantations across nine million hectares by 2016. Subsidies for smallholders palm producers led to the proliferation of palm oil plantations over an additional two million hectares between 2000 and 2009. A domestic mandate to produce fuel with at least 7.5% biofuel content is also encouraging palm expansion.

REDD+ financing could be used in part to reform subsidies to key commodities in a way that avoids further forest loss, the ODI paper suggests. In fact, the researchers identify examples of subsidy reforms that have already addressed the drivers of deforestation. The most successful example, according to the paper, is Brazil’s reform of its rural credit system in 2008 to require compliance with legal and environmental requirements. This resulted in an estimated $1.4 billion not loaned to out-of-compliance farmers between 2008 and 2011. The majority of this finance would have gone to supporting illegal beef production, leading to an estimated 15% increase in the rate of forest loss during those years.

There are also opportunities for subsidies to work harder in forests’ favor, according to ODI, particularly when it comes to intensification, or producing the same yields on less land area and with fewer inputs. Indonesia’s current palm oil yields of 3.8 tons per hectare fall below Malaysia’s yields of 4.6 tons per hectare. Smallholders in particular lag behind the productivity of private or government-owned plantations, indicating that with technology and financial support, smallholders could increase output without expanding plantations into the forest.

The ODI paper argues that these opportunities to shift the economic incentives around agriculture and forests should be an essential part of REDD+ process, both by phasing out or reforming subsidies that encourage deforestation and by designing any new incentives for REDD+ so that they complement other domestic efforts to shape private investment.

“There is current momentum on subsidy reform,” the authors write, citing countries’ emerging climate plans under the UNFCCC as well as the UN Sustainable Development Goals being developed for post-2015 as potential opportunities to rejigger agricultural subsidies to align with low-carbon development objectives.

Another key opportunity comes with the pending disbursement of the $10.2 billion in developed country pledges to the Green Climate Fund (GCF) established under the UNFCCC to support emissions reductions projects in developing nations. Norway, a major donor country, sees the GCF as an important channel for distributing REDD+ finance.

Thus far, finance for REDD+ “readiness,” or activities that will prepare countries to receive payments on the condition of successfully reducing deforestation, have not focused on changing subsidies connected to deforestation. However, this doesn’t have to be the case, the ODI paper argues.

“REDD+ finance could be used as a resource to support transparency, and as a lever to encourage subsidy reform,” the authors write.

Allie Goldstein is a Senior Associate in Ecosystem Marketplace’s Carbon Program. She can be reached at agoldstein@ecosystemmarketplace.com.