When carbon offset projects offer more benefits than carbon, here’s how to prove it. 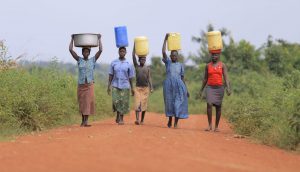 In celebration of International Women’s Day, March 08, 2021, Senior Associate Kim Myers calls attention to the invaluable role of women in our societies, and how female empowerment can be quantified as additional sustainable development benefits to carbon offset projects.

8 March 2021 | The people of Lango, Uganda pay a high price for their water, a price borne by the wives and daughters, not the fathers and sons. That’s because it’s women who must trek daily to rivers, streams, and forests, filling buckets of water and gathering wood to boil away the impurities. The women of Lango spend up to 2 hours a day providing water for their families – hours they could just as well spend earning income or studying in school.

Fortunately, there’s a solution: clean borehole technologies can deliver clean water from below ground, freeing up time for women to work, study, or relax. But the material and skills needed to build those boreholes don’t come cheap.

In 2019, Gold Standard hit upon a novel solution – if we built boreholes across the region, they reasoned, the women wouldn’t need to boil water, which means they wouldn’t need to chop trees, which means less carbon dioxide going into the atmosphere. Could we, they asked, use carbon finance to pay for the boreholes?

The answer, it turns out, is “Yes”, and the result is the Lango Safe Water Project, which reduces greenhouse gas emissions by eliminating the need to boil water and also frees up an average of two hours daily for local women.

Female empowerment is one of the many “co-benefits” associated with carbon projects. Unlike the emissions that these projects reduce or the carbon they remove, however, co-benefits were historically anecdotal, told in stories, rather than in numbers, like two hours saved.

Now, thanks to leading independent carbon offset standards like Gold Standard and Verra, carbon market actors can better quantify how much a given offset project contributes to sustainable development.

Improvements in gender equality are just one of many co-benefits that forest carbon projects provide. Others include the provision of sustainable livelihoods, the reduction of indoor pollution, and improved healthcare. While these attributes are necessary and important to quantify, they often consist of ‘fuzzier’ concepts. Take, for example, the Lango project, which significantly benefits the daily lives of local women. But by how much? And for whom? And how? Such questions can be very difficult to answer when you are talking about development impact.

Previously, carbon credit buyers were left to guess how much a given offset project contributed to the SDGs, or Sustainable Development Goals, the UN’s blueprint to a more equitable, sustainable, and prosperous future. This informal system of quantification led to a significant amount of ‘SDG-washing’ in the carbon market.

What is SDG-washing? Participants in the market coined the term to describe overstated development benefits associated with carbon offset projects.

Overestimating co-benefits is primarily the symptom of an emerging carbon market.  “It’s hard to tell the scale and an objectively compare one project to another when marketing material would just have the same SDG icon on Project A and Project B,” claims Sarah Leugers, Communications Director at Gold Standard. “[Market actors] are lacking the tools to be able to communicate and report [their impact] in a very clear and credible way.”

While these impacts may be secondary to companies’ primary goal of achieving net zero emissions, they are still worth measuring. “People are starting to really internalize the SDGs”, says Leugers. “They want to know, how are [carbon markets] really contributing [to development]?”

In fact, although they may be secondary for companies, sustainable development and climate mitigation have together been required core components of Gold Standard projects since it was first established in 2003.

The incentive for carbon credit buyers to quantify co-benefits extends beyond curiosity. Many market actors measure their SDG impact to create strong project narratives and enhance the credibility of their net-zero commitments. According to Ecosystem Marketplace’s Carbon Survey data, 62% of the tons of carbon purchased in 2019 were co-benefits certified. Thus, the demand for co-benefit quantification is strong. The main barrier to implementation, however, has been methodology.

Fortunately, there are major developments underway to bridge the resource gap. Both Verra and Gold Standard, major certification bodies in the voluntary carbon market, have designed much-needed tools for the measurement of co-benefits.

Verra’s SDG certification, SD VISta, is one flexible approach to quantifying co-benefits for both carbon offsets and other project types. Released in 2019, while not mandatory, the program encourages market actors to develop either their own methodology or monitoring metrics of co-benefit quantification. Acknowledging that project contexts and development impacts vary widely, Verra’s program enables a range of assessment options that go from internal verification by Verra, to the use of Independent Expert Evaluators for monitoring frameworks, to independent third-party certification when methodologies are developed.

The road to SD VISta certification is both flexible and rigorous. Thus far, Verra has registered one project, and 4 additional projects are in validation and verification stages.  The Rimba Raya Biodiversity Reserve Project, which meets all 17 Sustainable Development Goals successfully completed the registration and verification of monitored results under SD VISta, and “shows how projects can track progress against the SDGs in a rigorous and workable manner,” remarked Naomi Swickard, Chief Program Officer at Verra. “Many corporations who rely on carbon credits to meet ambitious climate goals value knowing that the carbon credits they purchase and retire have additional benefits beyond reducing emissions, and that they are independently certified.”

Likewise, Gold Standard launched the consultation phase for its SDG Impact Tools in early February 2021. The initial draft can be found here.

The tools build on past project experiences and industry expertise, mapping the typical indicators of sustainable development impacts and formatting them for quick, easy reference. Project owners take stock of their project’s development impact, both positive and negative, then ultimately assign those impacts to a specific SDG. While Gold Standard projects have been required to quantify and verify their SDG impacts, and have a design that enhances and promotes the goals of gender equality, social inclusion, and female empowerment, since the Gold Standard for Global Goals began in 2017, the SDG Impact Tools will make it easier than ever to measure and report these impacts, with standardized approaches and guidance.

And these are not the only development impact tools at the market’s disposal. Other certifications, such as the Climate, Community, & Biodiversity Standards and SOCIALCARBON are centered solely on co-benefits, meaning they can be applied to both carbon and non-carbon projects. Verra pioneered mechanisms to assess and certify community and biodiversity metrics via CCB starting in 2005, and in September 2020, Verra, W+ Standard, and Wonderbag of South Africa announced the application of the joint VCS/W+ Standard certification process to measure emission reductions and women’s empowerment results. Lastly, standards like Plan Vivo and the Fairtrade Climate Standard quantify co-benefits specifically for carbon projects.

Kim Myers is a Senior Associate of Carbon Markets and Corporate Sustainability at Ecosystem Marketplace.