10 November 2021  |  As the UN Climate Change talks at COP26 continue this week, Ecosystem Marketplace (EM) has prepared this special State of the Voluntary Carbon Markets (SOVCM) bulletin update from our first installment of SOVCM 2021 that was published on September 15th. This bulletin follows our commitment to expand our Global Carbon Hub by working more consistently with carbon credit market participants and stakeholders as an on-demand centralized repository of over the counter (OTC) and exchange-based trades, more regular EM publications with updates on the latest trades and trends in carbon markets, and more intelligent access to EM Data via EM’s online data dashboards and tools.

In addition to EM’s unique offering of VCM and compliance market trade data and insights from a global network of nearly 180 EM Respondents reporting on projects located in over 80 countries, the EM Data Intelligence & Analytics Dashboard includes data from 14 carbon standards’ registries, as well as corporate climate commitment and carbon credit claims insights (in testing within the EM Respondent version only at this time). Contact us here to speak with our team for a demo. 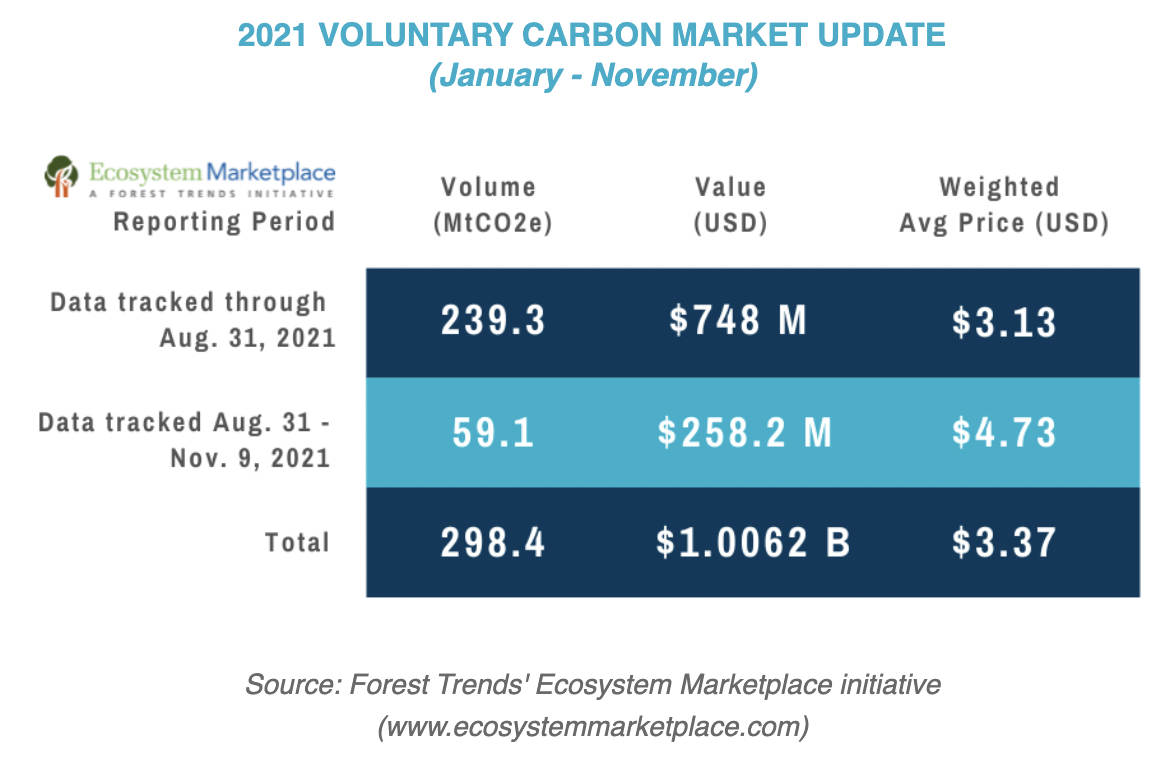 The headline from ‘Markets in Motion’, State of the Voluntary Carbon Markets 2021, Installment 1, was that the size of the voluntary carbon market was on track to hit (and exceed) $1 billion in value by the end of 2021 within a calendar year for the first time in EM’s 16-year history tracking the markets. This was based on data demonstrating that total 2021 VCM value was already at $748 million (as reported by EM Respondents by August 31), which was just shy of the first three quarters of the year.

Based on recently reported trades by EM Respondents (listed below), the VCM has now exceeded the $1 billion milestone. These additional 59.1 MtCO2e of 2021 VCM carbon credit trades have a corresponding market value of $258.2 million. Note, this data is a combination of carbon credit trades for the full calendar year, if they hadn’t yet reported to EM in 2021, and newly contracted trades since August 31st, which was the cutoff reporting date for the first installment.

Projects with accompanying co-benefits have again fetched a higher average weighted price at $5.95 per tonne while projects without had a weighted average price of $2.77 per tonne.

What else you need to know

These additional transactions occurred throughout 2021, not exclusively since August 31, as EM Respondents catch up on reporting transactions throughout the year. It is important to note that this latest data comes from a small but important subset of respondents; we made a special request to our network of respondents to provide updates to inform COP26. This new data comprises only 15 respondents, 3 of which told the EM team that they were sold out and won’t have new trades to report until their next issuance.

The full set of 2021 transactions will be fully compiled likely by the end of Q1 2022 to accommodate EM Respondents that report at an annual frequency. However, even this updated set of transactions, representing less than 10% of the respondents that provided data for the previous report, increased the total volume traded in 2021 by an additional 20% and an increase in 35% of the previously reported market value.

It should be noted also that additional trades reported by these EM Respondents increased 2020 volumes by 71.6 MtCO2e at a value of $309.5 million for an average weighted price of $4.32 per ton.

Please complete the form below to download a copy of ‘Markets in Motion’, State of the Voluntary Carbon Markets 2021, Installment 1, which found that the size of the voluntary carbon market was on track to hit (and exceed) $1 billion in value by the end of 2021 within a calendar year for the first time in EM’s 16-year history tracking the markets.