From the day Donald Trump was elected, we’ve heard that states and the private sector would counterbalance his efforts to undo environmental regulations. It’s an argument that comforted many but yielded little action – until last week, when The Wallace Global Fund fired Donald Trump’s law firm and a Sleeping Giant started shaking up Fox News. Here’s what these developments mean for efforts to slow climate change. 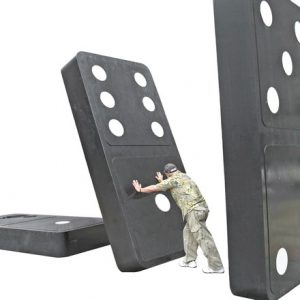 She’s Donald Trump’s tax attorney, and in January she famously told the world that her client can avoid conflicts of interest by letting his sons run the family business while he runs the country.

She offered her analysis two months after Trump won the election but nine days before he took office. Put another way, she offered her analysis two months after a consensus emerged at the global climate talks in Marrakesh, Morocco that the US private sector, along with cities and states across the country, would unite against the president-elect if he tried to implement his more destructive policies.

Now, another two months have passed, and plenty of business leaders have complained about the president’s policies; few, however, have taken action, and many executives have scrambled for a seat at the president’s  Mar-a-Lago table. That could be changing, as a man named H. Scott Wallace demonstrated last week.

He co-chairs the Wallace Global Fund, which is a combination charity and “impact investor“, which we’ll explain in a bit. Last Tuesday, he fired Trump’s law firm, Morgan Lewis & Bockius, and he did so in style: via a scathing and unambiguous letter that Politico posted on Thursday. The letter, which went viral across law blogs over the weekend, warned that “the ethical carnage is mounting” (and listed the casualties) while arguing that Morgan Lewis’s defense of Trump “empowers and even encourages impeachable offenses and undetectable financial conflicts of interest by America’s highest official.” Wallace closed by saying that he “cannot be complicit in that.”

On its own, the Wallace Fund’s action won’t change much. Indeed, Law.com pointed out that Wallace paid just $77,433 to Morgan Lewis in 2015, out of $1.84 billion billed. But Wallace isn’t acting in isolation. It’s acting in an environment where hundreds of companies are at least promising to do the right thing on climate change, and many have taken steps to deliver on their promises, while everyone seems to be looking for the catalyst that kicks the laggards into gear.

And that brings us to something else that happened on the weekend: specifically, to the New York Times revelation that Fox News has paid out roughly $13 million to stifle allegations that popular host Bill O’Reilly serially abused women. Mercedes-Benz immediately pulled its advertisements from “The O’Reilly Factor”, and Hyundai followed. But it was the anonymous Twitter group Sleeping Giants that sent things into overdrive.

You may remember these guys from their campaign against Breitbart News: they shamed advertisers away from the site, and their Twitter page offers insight into how and why:

“We are trying to stop racist websites by stopping their ad dollars,” it says. “Many companies don’t even know it’s happening. It’s time to tell them.”

On Monday, Sleeping Giants polled its followers to see how they felt about going after O’Reilly. Then, with its followers’ blessing (and, after the poll, their active engagement) it published a list of O’Reilly’s advertisers.

About two dozen companies immediately pulled their ads, and the Giants rewarded them with high praise and absolution.

What Does This Have to do With Climate?

Every segment of the global population has its good actors and bad actors, and the corporate sector is no different. Companies like Unilever, Marks & Spencer, and Kellogg’s, for example, have long engaged in sustainable practices – but for every company doing the right thing, five are accelerating climate change by chopping forests to give us cheap hamburgers.

Here, the Sleeping Giants approach is informative. They assume that “many companies don’t even know it’s happening,” and that their job is to simply help those companies see the light. In the case of global supply chains, that’s not necessarily a naïve assumption: supply chains are dense and opaque, and companies buy through scores of intermediaries and often don’t know where their raw materials come from.

At the same time, roughly 60 multinational companies have endorsed the New York Declaration on Forests, which is a pledge to slow climate change by eliminating deforestation from the production of palm, soy, cattle, and timber & pulp by 2020.

It’s an admirable pledge, but only about half of them are actually reporting progress on their commitments, according to the Forest Trends Supply Change initiative, which tracks roughly 450 companies.

But therein lies the solution: Supply Change isn’t the only effort shining a light on global supply chains. There’s the Forest 500 and Trase, and others “helping” companies see where their materials are coming from.

Consumers can tap these same resources to see who is sourcing sustainably, while more and more companies are joining multilateral organizations like the Consumer Goods Forum (CSF) or submitting to certification programs like the Forest Stewardship Council (FSC), the Programme for the Endorsement of Forest Certification Schemes (PEFC), and the Roundtable on Sustainable Palm Oil (RSPO).

Another sleeping giant is beginning to stir, and it’s up to consumers and investors to awaken him – which brings us back to the Wallace Global Fund.

The Wallace Fund isn’t just a charity. It’s an impact investor that has put 10 percent of its endowment into “high-impact investments… that advance our core mission while also generating financial returns.” Such investors have more than $75 billion under management, according to the Global Impact Investing Network, and Ecosystem Marketplace research shows that impact investors directed $8.2 billion toward preserving forests, protecting watersheds and developing sustainable agriculture.

Then you have pension funds like the California Public Employees’ Retirement System (CalPERS), which has more than $300 billion under management and, while not explicitly categorized as an impact investor, has voted with its portfolio in the past, most notably in divesting from South Africa. It’s currently under pressure to divest from fossil fuels, but administrators have pushed back on that because their primary responsibility is to the retirees whose money it manages.

Experts like UCLA professor Ivo Welch have argued that divestment is overrated, and that impact investors should instead focus on using their voting shares to “press corporate boards to make changes.”

Indeed, he says, divestment is pointless unless done on a massive and coordinated scale.

“Global public equity markets constitute about $60 trillion of market capitalization,” he wrote in an op-ed criticizing calls for Stanford University to divest itself of coal-mining stocks. “With about $19 billion, Stanford’s endowment represents only about five-hundredths of 1 percent of the world’s capitalization.”

True, but Stanford isn’t alone. Nearly 700 institutions – including pension and hedge funds – have pledged to divest from fossil fuels, and Mercedes-Benz just showed us that one company can start an avalanche if groups like Sleeping Giants provide a simple way to focus public attention.

The dominoes are all there. Who will be the first to tip them?