US President Donald Trump’s proposed 2018 budget deals the environment death by a thousand cuts scattered across at least seven and probably more agencies. Here is a list of the cuts we’ve identified so far, and an open invitation to let us know if we’ve missed anything or gotten anything wrong. 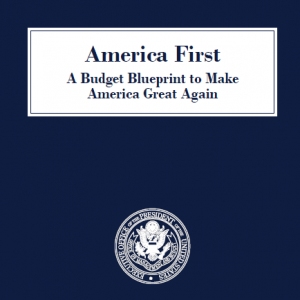 17 March 2017 | We, the people of the United States of America, being responsible for roughly 16 percent of all the scientifically verifiable greenhouse gasses that man has emitted into the atmosphere since the dawn of the industrial revolution, find it just and honorable that we pay roughly 20 percent of the budget for the United Nations Framework Convention on Climate Change (UNFCCC), which is charged with cleaning up the mess.

We also find it just and honorable that we’ve pledged $3 billion to the Green Climate Fund, which is charged with helping the poorest and most innocent countries of the world deal with the consequences of a mess that we, the developed countries have created.

“We’re not spending money on that,” Mulvaney said of climate change as he unveiled the Trump Administration’s preliminary 2018 budget proposal – which, as anticipated, cuts all funding for anything related to understanding, avoiding, or adapting to climate change, while gutting funds for the environment at large.

Yesterday’s document is the “skinny budget”, which acts as a kind of preview of the full budget to come later. The full budget then goes through Congress, where even Republicans have begun to bristle at its more draconian measures.

Still, the skinny budget gives us a fairly good idea of the administration’s priorities, and I’ve broken the environmental impacts out by department, ranking the departments by depth of cut on a percentage basis.

NOTE: Each header is a link to the relevant text in the document itself, which is fairly easy to understand (in fact, it reads more like a campaign ad than a real budget), so you can click on the header and dive into the text yourself. Also, any unattributed quotes are from that document as well. The document alludes to lots of programs I’m not familiar with, and if you see any errors or omissions, please contact me at SZwick@forest-trends.org, and I will update as appropriate.

The budget increases the EPA’s  State Revolving Funds by $4 million – or less than 2 percent – to $2.3 billion, and maintains the $20 million for the Water Infrastructure Finance and Innovation Act program, which is a credit subsidy that “could potentially support $1 billion in direct Federal loans.”

Beyond that, however, it’s grim:

It “emphasizes efficiency efforts” by cutting funding for the Hazardous Substance Superfund Account by $330 million, to $762 million.

It trims the Office of Enforcement and Compliance Assurance by $129 million, to $419 million, ostensibly to avoid duplication “by concentrating EPA’s enforcement of environmental protection violations on programs that are not delegated to States, while providing oversight to maintain consistency and assistance across State, local, and tribal programs.”

It slashes the Office of Research and Development (ORD) by $233 million – or 48 percent – to $250 million, ostensibly to “prioritize activities that support decision-making related to core environmental statutory requirements, as opposed to extramural activities, such as providing STAR grants.”

It eliminates funding for specific regional efforts, and explicitly mentions the Great Lakes Restoration Initiative and the Chesapeake Bay. “The budget returns the responsibility for funding local environmental efforts and programs to State and local entities,” the document says – completely ignoring the fact that the federal government got involved in these two regions because they cross so many state boundaries, which made it difficult for states to regulate themselves.

It also eliminates more than 50 other programs, “saving an additional $347 million.”

The State Department section of the outline also addresses programs beyond State and describes total cuts of $15.2 billion, from $58.2 billion to $37.6 billion, which is 29%. Either way, its cuts are the second-deepest and have the greatest impact on climate change beyond the borders of the United States.

That’s because the State Department represents the United States in global climate negotiations – or, at least, it’s done so to-date – and both it and the United States Agency for International Development (USAID) spend billions on international climate abatement efforts. The budget calls for State and USAID to “pursue greater efficiencies through reorganization and consolidation in order to enable effective diplomacy and development,” and it “reduces funding to the UN and affiliated agencies” – which Trump and Mulvaney have both said means no more funding for the UNFCCC.

The budget “eliminates the Global Climate Change Initiative,” is a USAID program that funnels $350 million towards renewable energy and land management efforts in the developing world.

It also ‘fulfills the President’s pledge to cease payments to the United Nations’ (UN) climate change programs by eliminating U.S. funding related to the Green Climate Fund,” which is a United Nations vehicle through which developed countries help developing countries adapt to climate change. The United States has pledged $3 billion of the $10 billion total, but it has only delivered $1 billion of that so far – with $500 million going in the final days of the Obama administration. By reneging on its pledge, the United States leaves a $2 billion hole.

The budget also slashes funding to multilateral development banks, which are actively engaged in the climate fight, by $650 million over three years.

The USDA does a lot more than ensure food safety: it oversees the United States Forest Service, which manages 25 percent of the country’s public lands and provides support to private forest owners.

It also works for the environment by supporting sustainable agriculture through three mechanisms: easements, which involve paying to permanently set land aside for conservation; cost-sharing programs, which help landowners implement sustainable initiatives; and research and technical support. Emily McGlynn, Director for Strategy and Policy at The Earth Partners LP, says the agency pays more than $1 billion directly to farmers every year for environmental purposes alone.

The wording of the USDA section is especially vague, so it’s difficult to say what exactly gets cut and what stays beyond wildland fire preparedness and suppression activities, which are funded at the 10-year average of $2.4 billion (a level that critics say is too low, because it doesn’t allow for increased fires driven by climate change.

The budget “reduces funding for lower priority activities in the National Forest System,” but it doesn’t say what “lower priority” means beyond the acquisition of new forests and grasslands, which it wants to end.

The budget “focuses” (which means reduces) “in-house research funding within the Agricultural Research Service to the highest priority agriculture and food issues such as increasing farming productivity, sustaining natural resources, including those within rural communities, and addressing food safety and nutrition priorities.”

It also “reduces funding for USDA’s statistical capabilities,” which could drastically reduce the department’s ability to measure the amount of carbon stored in the country’s forests, farms and fields. That’s significant, because those systems currently absorb about 15 percent of US industrial emissions.

The budget eliminates the Water and Wastewater loan and grant program, which it labels “duplicative” because “rural communities can be served by private sector financing or other Federal investments in rural water infrastructure.”

Among those other investments are “the Environmental Protection Agency’s State Revolving Funds,” which the budget increases by $4 million– roughly 2 percent of the money the federal government now spends protecting just the New York Trump Tower.

The budget also calls for reductions in the agency’s field operations while aiming to “encourage private sector conservation planning” – implying, perhaps, more support for market-based mechanisms and the Office of Environmental Markets.

That’s pure speculation on our part, but it’s speculation you can rest assured we’ll be exploring in the weeks and months ahead.

We initially missed this one: the National Oceanic and Atmospheric Administration (NOAA) is part of the Department of Commerce, and the budget “zeroes out over $250 million in targeted National Oceanic and Atmospheric Administration (NOAA) grants and programs supporting coastal and marine management, research, and education including Sea Grant, which primarily benefit industry and State and local stakeholders.”

Sea Grant, as Climate Central points out, provides funding to – among other things – help coastal cities and towns protect themselves from rising sea levels.

Department of the Interior

The Department of the Interior oversees 75 percent of the country’s public land and includes the National Park Service and the Fish and Wildlife Service, as well as the Bureau of Indian Affairs, among others. It is, paradoxically, charged both with exploiting natural resources and with protecting nature.

For example, it increases funding for “environmentally responsible” offshore drilling and “sustains funding for DOI’s Office of Natural Resources Revenue, which manages the collection and disbursement of roughly $10 billion annually from mineral development.” The U.S. Geological Survey also gets an increase – ostensibly for “essential science programs” but explicitly for “research and data collection that informs sustainable energy development, responsible resource management, and natural hazard risk reduction.”

It eliminates “unnecessary, lower priority, or duplicative programs” and lists among these “National Heritage Areas that are more appropriately funded locally, and National Wildlife Refuge fund payments to local governments that are duplicative of other payment programs.”

The National Park Service, Fish and Wildlife Service, and Bureau of Land Management will all be “streamlined” in non-specific ways, and there is no budget for acquiring more public lands, but the Park Service will get an unspecified increase in funding for deferred maintenance projects.

There is also language that implies support for private conservation, and a clear allotment of “over $1 billion in safe, reliable, and efficient management of water resources throughout the western United States.”

The budget provides $6.5 billion for cleaning up nuclear wastes, but it “focuses” (reduces) funding for the Office of Energy Efficiency and Renewable Energy.

It eliminates funding for three popular programs because, it says, “the private sector is better positioned to finance disruptive energy research and development and to commercialize innovative technologies.” The largest of those programs, however, was created explicitly because the private sector wasn’t investing in the kinds of high-risk/nebulous-reward projects that other countries were tackling. The three programs targeted for defunding are:

The Advanced Research Projects Agency-Energy (ARPA-E), which was launched in 2007 under President Bush but first funded under President Obama to invest in “high-risk, high-reward research that might not otherwise be pursued because there is a relatively high risk of failure,” according to its Wikipedia entry. It has since supported more than 400 projects, and the Senate voted 70-26 last year to increase its funding by $30 million, to $382 million.

The Weatherization Assistance Program provides grants of up to $6500 to help people make their houses more energy-efficient.

That essentially means anything that could help us understand climate change is gone: the PACE mission was created to monitor atmospheric damage from aerosols; the OCO-3 program is designed to better measure carbon dioxide emissions; DSCOVR keeps an eye on deforestation and pollution; and CLARREO Pathfinder is used to test climate models.

This story did not initially include the Department of Commerce. Please let us know if we missed anything else.

2 thoughts on “How Trump’s Budget Hits The Environment, Agency-By-Agency”