Countries and companies around the world have endorsed the New York Declaration on Forests, which is a pledge to end deforestation by 2030. An analysis of climate action plans from six key tropical countries – including four NYDF endorsers – finds that none of them are on track to meet that target. 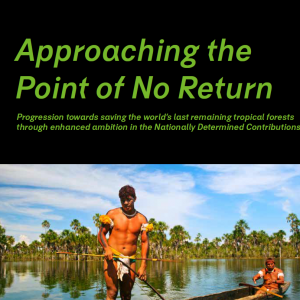 12 December 2018 | KATOWICE | Poland | If we’re to prevent global temperatures from rising to a level more than 1.5ºC (2.7ºF) above pre-industrial levels, we must dramatically improve the way we manage our forests, farms, and fields.

That’s a key lesson from the Intergovernmental Panel on Climate Change’s (IPCC’s) recent Special Report: Global Warming of 1.5°C, and it’s one reason countries like Indonesia, Colombia, Peru, and the Democratic Republic of the Congo (DRC) have endorsed the New York Declaration on Forests (NYDF), which is a pledge to end deforestation by 2030.

Unfortunately, none of those countries have created climate action plans (NDCs, or “Nationally Determined Contributions”) that will achieve that goal, and neither have Brazil or Myanmar, according to research by the Rainforest Foundation Norway.

Entitled Approaching the Point of No Return and presented at year-end climate talks (COP24) here, the report dissects the NDCs of these six key countries and finds that none correlate with a zero-deforestation future. Indeed, only one of the six – Indonesia – even specifies a reduction in deforestation, but not to zero.

Indonesia has endorsed the NYDF, but it’s NDC correlates with a 66- to 90-percent reduction in deforestation, depending on how much help it gets from other countries.

“This is an improvement on current deforestation levels, but still means that 3.25 million hectares of forest, the size of Belgium, will be deforested by 2030,” the authors conclude.

Brazil has not endorsed the NYDF, and its NDC doesn’t set a deforestation target, although its foundation document does describe a 90 percent reduction compared to 2005 levels.

The authors point out, however, that 2005 was a disastrous year for deforestation, and that the administration of Luiz Inácio Lula da Silva had already driven deforestation down more than 60 percent.

The DRC is also an NYDF endorser, but its NDC shows increased deforestation by 2030, albeit one below a business-as-usual scenario.

“If the NDC target is reached, emissions in this sector will be 50 percent higher in 2030 than in 2010,” the authors conclude.

Peru is also an endorser, yet like DRC, it also sees emissions from deforestation rising but 71-77 percent less than currently projected.

“This means that emissions from the forest and land use sectors can increase even if the targets are met – by 21 percent from 2010 to 2030, or by 3 percent if international financial help is provided,” the authors conclude.

Both Colombia and Myanmar have endorsed the NYDF, but both have also generated NDCs that are too vague to really quantify.

“Myanmar should be encouraged to present these mitigation effects in an updated NDC before 2020,” the authors write. “Colombia has committed to clarifying its goals for forest emissions before 2020.”

Indigenous peoples are among the most effective stewards of the land, and their lands sequester one billion tons of greenhouse gas, but the reported paints a critical picture of the way local communities and communities are treated in all six countries.