Indonesia sometimes generates 40 percent of the world’s greenhouse-gas emissions from deforestation, and the country’s federal government is powerless to reverse it. That’s because true power in the land of a thousand islands lies with hundreds of regents, or “bopatis”, who are driving one of the world’s most calamitous environmental disasters. 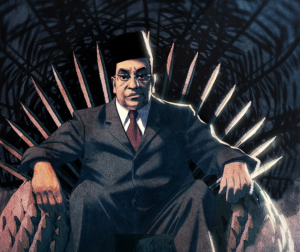 13 October 2017 | To non-Indonesians, President Joko Widodo is the face of government there, as was Susilo Bambang Yudhoyono before him.

Citizens, however, know that authority in the “land of a thousand islands” lies not with the president or even with senators and governors, but with locally-elected regents – or “bopatis” – who came to power when President Muhammad Suharto‘s 30-year reign ended in 1998.

They emerged in a wave of euphoric reforms that were supposed to give power to the people, but instead many bopatis abused their positions to enrich themselves and their families, with devastating consequences for farmers, fishermen, and forests across the country – consequences that ultimately impact us all because of the way they spill out in the form of greenhouse-gas emissions from deforestation and degradation.

Now an investigative series called “The Making of a Palm Oil Fiefdom” dives into the world of bopatis and shows how a few corrupt men, immune to central authority, took over large swathes of the country’s forests and destroyed them to make way for palm oil plantations, turning Indonesia into one of the world’s largest greenhouse-gas emitters – one that sometimes contributes nearly 40% of the total worldwide emissions from deforestation

Produced jointly by MongaBay and The Gecko Project, the series is running concurrently on both sites and focuses on a few key bopatis, as well as on the local activists who oppose them.

It’s must-reading for anyone interested in working to slow deforestation, because most current efforts focus on the federal government, while true power lies with bopatis, who in turn rely on the global palm oil market, of which we are all a part.

It’s Not What You Think

The series focuses on one bopati, Darway Ali, who first won election in 1998 and then used his authority to award palm oil concessions across the district of Seruyan. The authors dive into the books of the companies that won concessions, and they find a cluster of shell ultimately held by Ali and his family and cronies. They show how Ali destroyed massive swaths of forest, and how his companies then sold the concessions to international powerhouses like Wilmar. When the next election came along, Ali used his massive wealth to bankroll a corrupt campaign that cemented his family’s hold on power – a pattern that replicated itself across Indonesia.

“This agricultural surge is routinely cast as an economic miracle, rapidly bringing income and modernity to undeveloped regions. In this narrative, expansion was planned, controlled and regulated,” the authors write. “The harm to the environment was an unfortunate side effect of the moral imperative of development.”

That’s certainly the narrative I tended to have in my head.

“But there is another version of the story, one that played out through backroom deals and murky partnerships,” they write. “In this story, unaccountable politicians carved up other people’s land and sold it to the children of billionaires.”

The first instalment, “The Palm Oil Fiefdom”, focuses on Ali.

The next instalment, “The Land Deal Behind the Downfall of Indonesia’s Top Judge”, follows the money trail that ended in the bribery of Akil Mochtar, chief justice of the nation’s highest court, to secure an election win in Borneo. It lays bare the connection between natural resources and money politics, and the middlemen who serve as the connective tissue in that relationship.

The final instalment, “The Secret Deal to Destroy Paradise”, exposes a shadowy cabal that constitutes the largest single threat to Indonesia’s forests today, with links from Papua to Malaysia to Yemen. It reveals the methods these people are using to hide their identities and the illegality of their projects as they forge east into the archipelago’s last frontier.