Mainstream media outlets have been congratulating themselves of late for becoming just 20 years too late on climate change, and now the same institutions that have consistently failed to cover the enormity of the challenge are failing to cover the myriad interlocking solutions. This week, ProPublica became the latest outlet to blow it 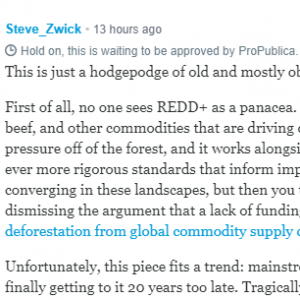 This story represents the personal views of Steve Zwick and not necessarily those of Forest Trends or Ecosystem Marketplace.

23 May 2019 | By now, we’ve all seen the still-infrequent but appropriately dire headlines on climate change.

“We have 12 years to limit climate change catastrophe,” screams The Guardian. “Terrifying climate change warning: 12 years until we’re doomed,” shrieks even Fox News. The New York Times has been especially good at ramping up coverage of the climate challenge – to the point that they’re only 20 years too late (and quite proud of themselves for getting there, dot.Earth notwithstanding).

That last bit is a serious problem, because the same self-aggrandizing media outlets that have consistently failed to understand, let alone explain, the enormity of the climate challenge are now failing to even try to understand the interlocking solutions that are emerging to deal with it – solutions that work by helping (and eventually compelling) companies to purge deforestation from their supply chains, or by helping farmers to employ climate-smart agriculture, and by using carbon finance to support these and other efforts.

Every few years, some deep-pocketed media group will parachute some hapless reporter into the fray, with disastrous results, as I outlined a few years back in a piece called “To The Atlantic: Don’t Let Conservation Finance Go The Way Of Obamacare And Climate Science.”

This time, it’s ProPublica, with an error-riddled mess called “An (Even More) Inconvenient Truth,” which came out yesterday. I dutifully posted a comment identifying their mistakes and waited for it to show up… and waited and waited… Other comments did materialize, including one that was also critical of their reporting… but after 15 hours, something inexplicable happened: my comment disappeared from my screen, as did the lone critical comment that had shown up.

I’ll give them the benefit of the doubt and assume the reason they’re taking a while to review my comment is that it’s long and rambling, or maybe it’s because I made some edits after a while to tone it down… and maybe they deleted the other critical comment because… well, that’s what makes me wonder. For now, I thought I’d share my comment here – with the caveat that it’s something I dashed off quickly, employing the effort befitting a comment, and not the effort I’d put into a true op-ed:

This is just a hodgepodge of old and mostly obsolete findings brought to life with a field trip, some cute metaphors, and way too many unforgivable errors.

First of all, no one sees REDD+ as a panacea. It’s one tool in a very big box, and it’s a mere trickle compared to the torrent of money going into the production of soy, beef, and other commodities that are driving deforestation, often illegally. REDD+ works in part by funneling money into sustainable agriculture initiatives that take the pressure off of the forest, and it works alongside — and not instead of — efforts to promote climate-smart agriculture and other natural climate solutions, such as creating ever more rigorous standards that inform import restrictions. By parachuting into Acre, you got a tiny little glimpse of the challenges being faced and the myriad forces converging in these landscapes, but then you threw up your hands and said REDD+ doesn’t work — ignoring the hundreds of examples where it does work and dismissing the argument that a lack of funding for REDD+ and other natural climate solutions is the problem, while failing to even mention efforts to purge deforestation from global commodity supply chains.

Unfortunately, this piece fits a trend: mainstream media have consistently failed to cover climate change for decades, yet they’re roundly congratulating themselves for finally getting to it 20 years too late. Tragically, the same people who have failed to understand the problem are now failing to understand, let alone explain, the emerging solutions. Instead, they’re righteously torpedoing any viable solutions that don’t fix the whole mess with one fell swoop (and dismissing the Paris Agreement). On offsetting, this leads to a shortage of demand for offsets, and not the “hunger” alluded to here.

End lecture. Segue back to fact-checking session (don’t you guys have fact-checkers?).

You describe the Kyoto Protocol’s Clean Development Mechanism as “the largest program”, as if it’s just a bigger version of the voluntary markets. It’s not, and that distinction is especially important in land use, because REDD+ as it’s evolving under the UNFCCC focuses on countries while the voluntary projects exist in smaller territories. The California proposal will send money to projects that nest within national programs, which mitigates the leakage issue. Also, you say that uncertainty around carbon accounting increases as the area increases, when in reality, the larger the area, the lower the uncertainty. It’s the law of large numbers.

Sticking with the conflation theme: you’re conflating early, experimental offsets that are no longer recognized (for the reasons you cite) with the offsets being generated today. That’s what loony right-wingers do when they use Solyndra to criticize the US Energy Department’s entire loan guarantee program.

Getting back to the voluntary markets: you mention Verra, which runs the Verified Carbon Standard (VCS). Well, VCS has approved roughly 350 million tons of offsets, and the Surui project accounted for just 250,000 of those — about 1/1400th. That matters, because Verra acknowledges that each of those offsets can go bad, so it requires projects to contribute to a global buffer pool. The Surui project contributed about 15 percent of its offsets to that buffer pool, and when it was suspended (because of incursions by illegal mining, and not loggers), Verra offset the loss by retiring offsets from its buffer pool. From an environmental perspective, the project’s failure did not lead to an increase in emissions. You also claim that the logging and mining faction was “disillusioned by the amount of money going to international groups for logistics management”, which is not true. That can be an issue, because validation and verification is expensive, but in this case the international consultants involved were financed separately, because of the project’s status as a pilot. Basically, Almir got zero support from local law enforcement, who he was trying to engage in the letter you cite, until it was too late.

You also claim that “polluters got a guilt-free pass to keep emitting CO₂,” which has no basis in reality. In a cap-and-trade system, the cap lowers every year, and cap-and-trade provides a way to manage the transition properly. For now, we mostly have voluntary markets, and our research finds companies that voluntarily buy offsets also end up making much deeper reductions internally and even beyond their factory floor than do companies that don’t offset — which is the ultimate aim. Offsetting, in other words, is a gateway to deeper emissions, in part because it forces companies to quantify their emissions. It’s not an indulgence. It’s a flashlight.

You make a hand-wavy reference to the Tropical Forest Standard, which was forged with the support of indigenous leaders from around the world. Nowhere near enough space here to explain that.

You talk about “the Acre program”, but never tell us what it is (I assume you mean the program that KfW, the German development bank, funded there — but that wasn’t an offset. It was a payment for performance).

You conflate the “science of measuring carbon” with the art of measuring man’s impact on carbon flows and stocks. It’s a rabbit hole for sure… and you should be trying to understand it rather than just dismissing it out of hand.

Your credit card analogy doesn’t hold up, because with REDD+ you’re preventing emissions from being emitted, so the buyer gets the benefit by paying for a reduction that has already taken place, and offsets aren’t issued all at once, anyway.

Right now, more than ever, we need explanatory journalism around climate change to help people navigate the new reality of life on a managed planet, but the pattern of coverage into which this fits doesn’t deliver. Several grandstanding reporters, for example, have made names for themselves pontificating on the failure of the Paris Agreement to set high enough ambitions, failing in the process to understand the purpose of the Paris Agreement (namely, to provide a global framework within which countries can cooperate to raise ambition and hold each other accountable). The Paris Agreement provides universal agreement on thousands of contentious issues that tripped up the Kyoto Protocol, but the ambition has to come from countries. It’s our job as reporters to spark that ambition, in part by understanding and explaining not only what’s at stake, but how all of the emerging solutions fit together. Instead, we’re slamming every effort that doesn’t magically fix the whole mess all at once.

I apologize if this seems all over the place. It really requires a more structured rebuttal, but there’s a lot wrong here.

Don’t get me wrong. There are issues with offsetting, especially in the land sector, but somehow you managed to miss the really sticky ones. The bottom line is that offsetting is just one little carrot in a global system of carrots and sticks. It works in some cases but not in others, and it’s not meant to work alone. It’s a catalyst, not a cure.