Peru has long been among the more innovative countries in dealing with the consequences of climate change, and last week policymakers there approved critical tools that can open the door for public and private investment in forests, water and biodiversity conservation. 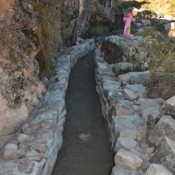 25 July 2016 | Just days before handing the reigns of power to president-elect Pedro Pablo Kuczynski on Peruvian Independence Day, the administration of outgoing President Ollanta Humala issued a flurry of environmental policies that provide his successor with a powerful set of tools for funneling money into conservation and sustainable agriculture.

First, the Ministry of Environment released formal regulations for the country’s groundbreaking Mecanismos de Retribución por Servicios Ecosistémicos (MRSEs), or “Mechanisms of Compensation for Ecosystem Services” law, which legislators approved in 2014. The law created a legal framework for conservation activities that harness public and private capital, and the new regulations offer clear guidance on how to implement them. In a related move, the government approved its National Forestry and Climate Change Strategy and issued guidance on biodiversity offsets, primarily for Andean ecosystems.

More on the Forest Trends Blog

Ecosystem Marketplace publisher Forest Trends has been participating in the development of Peru’s green infrastructure through a number of programs, including the Peru Ecosystem Services Project Incubator, a collaboration of Forest Trends with regional NGOs and the Peruvian Ministry of Environment. For an insider perspective on the new developments, check out the latest entry in the Forest Trends Blog.

This new regulation highlights that Peru has been working on this issue of recognizing ecosystems services as an important tool for environmental management, social inclusion and wealth distribution, Gabriel Quijandria, Peru’s Deputy Minister of Strategic Development of Natural Resources said in a statement.

The National Congress passed its MRSE law in 2014 after six years of negotiation. Essentially, the law provides the regulatory certainty MRSE project developers need to operate and create more projects, according to an earlier Ecosystem Marketplace article. According to Peru’s Environment Ministry, environmental services under the MRSE umbrella include water regulation, biodiversity conservation, carbon storage, pollination and recreation among others.

The city of Lima made headlines last year when it began tapping its water fees to fund projects like the restoration of ancient, pre-Incan water management systems high in the Andes – a very visible manifestation of a nation-wide move to develop “green” (as opposed to gray) infrastructure that can better withstand the realities of climate change.

The True Value of an Ecosystem Services Law

Gena Gammie, Associate Director of the Forest Trends’ Water Initiative, points out that Peru, like many Latin American countries, follows civil law, which requires more prescriptive statutes and ordinances than does the common law practiced in the United States, especially when it comes to the use of public funds.

If the terms of the projects aren’t specifically allowed and promoted by the law, government officials run the risk of consequences for misuse of public funds, Gammie explains. The MRSE law and the new regulations eliminate many grey areas, creating more clarity for financial flows.

Carbon sequestration is a common link between the MRSE regulation and the National Forestry and Climate Change Strategy. The MRSE law and regulation provide guidance and the overall structure regarding Reducing Emissions from Deforestation and forest Degradation (REDD) projects. Meanwhile, the National Forestry and Climate Change Strategy functions as Peru’s national REDD strategy. The two share a REDD component and influence one another, Gammie explains.

According to the Forest Trends blog post that summarizes the recent policymaking, the National Forestry and Climate Change Strategy represents an inclusive approach to land-use that brings together national and regional governments, indigenous groups and civil society to identify the major drivers of deforestation and then offer solutions.

Gustavo Suarez de Freitas, the Head of Peru’s National Forest Conservation Program, agrees that this strategy can have a significant impact on curbing forest loss. He highlights the “production-protection” part, which aims to increase productivity on the landscape while maintaining and recognizing the benefits of conserved forests. “I am convinced that the production-protection will make the difference, and that with this as our foundation we will be able to begin to reverse deforestation in Peru,” Suarez de Freitas told Forest Trends.

The newly released biodiversity offset guidance is separate from the MRSE regulation, though its impact will likely be large. Its focus is on protecting the biodiversity of Andean ecosystems where the biggest development projects are required to compensate for their adverse impacts on biodiversity, while offsetting remains voluntary for medium and small size development activities.

Protecting biodiversity in Peru is critical as the nation is one of the most biologically diverse places on Earth. And much of that is rare, endangered or both. Peru’s Manu National Park is considered to be the richest biodiversity hotspot in the world.

However, as all of these policy announcements appear to have come in the nick of time, before a potential political wind-shift, Gammie says it will be interesting to see how the incoming government will move forward with them.

“Will the new administration implement these policies and continue to strengthen capacity around them or will they just let these go,” she asks.

The Inside Story Of Peru’s Shift To Green Infrastructure