Under the Hilltop Sand and Gravel landfill in Alexandria, Virginia, methane is stirring. But rather than leaking into the atmosphere, this gas is piped to a central location and then flared off into a less potent form. Local natural gas customers are paying for the project by offsetting their energy emissions. 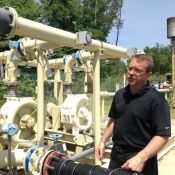 17 July 2015 | Washington D.C. | It’s a hot day in May, and air conditioners throughout Washington, D.C. are already pumping. Across the river in Alexandria, Virginia, a group of WGL Energy employees stands next to a giant pile of trash. Mike Gailliot, the owner of the pile, opens a chain-link fence and leads the group into a maze of pipes and blowers, all pumping methane – a potent greenhouse gas – into a six-inch gas flare that is invisible save for the willowy shadow it casts on the sidewalk. This flare is the result of the methane being burned off into carbon dioxide, reducing its impact on the atmosphere by 95%.

Galliot points out a concealed box that contains a continuous methane analyzer that shoots a laser through the gas to determine its contents. If the methane concentration falls too low to sustain a flame, the propane lighter automatically shuts off, and Gailliot and his engineers receive a text – sometimes in the middle of the night – prompting them to check on the system.

“There is definitely a science to it,” he says. “And an art, I suppose.”

The Gailliots have owned this land since 1917. For decades it operated as a chicken farm, then a sand and gravel business. Eventually, they became proud owners of a 150-foot-deep hole, which they soon found also had value: as the Hilltop Sand and Gravel landfill, which they opened in 1979. Thirty year later, the hole was full, and the landfill needed to be closed.

By law, that meant covering it with a layer of clay that allows water to percolate, but that would also let methane ventilate through this layer as the debris breaks down.

“We’re a small enough facility that we didn’t fall under the Clean Air Act,” Gailliot says, adding that because the landfill collected construction and demolition debris, it also wasn’t subject to regulations applicable to municipal solid waste facilities, but that leaking methane violated Gailliot’s “good neighbor” policy, and it wasn’t part of the legacy he wanted to leave to his children.

“Thirty years from now do I want my kids to worry about something like landfill contamination?” he asked.

The Gailliots decided to cap the landfill with a high-density polyethylene cap that cost around $200,000 per acre and install the methane flaring equipment. Gailliot calls it their “insurance policy,” or the family’s license to operate in the community where they live, but it was a steep price.

What lies beneath? Three decades of construction debris, safely capped off.

To cover his costs, Gailliot turned to carbon markets, which are designed to help people reduce their emissions more than they would under a business-as-usual scenario. Any methane destroyed as a result of the equipment Gailliot installed is “additional” to what is required by law and therefore eligible to be verified as offsets under the Climate Action Reserve (CAR), a carbon standard used widely in the United States.

“In the waste industry it was something I’d been following,” Gailliot said. “We were aware of the market – and we had a landfill that was generating methane.”

In 2010, Gailliot installed a flow meter and realized that Hilltop was generating a sufficient volume of gas to justify a landfill gas offset project. By following CAR procedures and carefully documenting all of their actions, the Hilltop project produced 16,898 offsets between March 2013 and March 2014, according to CAR’s verification report. Gailliot estimates that they may be able to produce as many as 40,000 offsets annually as the decomposition of the debris in the landfill accelerates – the equivalent of keeping 40,000 tons of carbon dioxide out of the atmosphere.

But generating offsets is only half the challenge. They also have to sell them, and that’s why the WGL Energy employees are here.

Hilltop’s offsets are one solution to the question WGL Energy, a supplier to many customers of the natural gas utility Washington Gas, seeks to answer: How can they help their customers green their natural gas usage? Offsetting unavoidable emissions is part of that strategy – but WGL Energy wanted the program to be tangible to its customers.

“We wanted all the projects within a day’s drive but also within the Chesapeake Bay watershed,” Alicia LaRoche, WGL Energy’s Green Products Manager, said.

Methane from throughout the landfill is piped here, where it is flared off.

Sterling Planet, a Georgia-based offset provider, connected WGL Energy with Hilltop, as well as other projects in the region, including the Worcester County Landfill Gas project and the J.B. Hunt Transport Services project, which combines trucking with other forms of travel (such as rail) to reduce the emissions of moving goods long distances.

The product is called CleanSteps Carbon Offsets, and since it began being offered in 2010, several thousand WGL Energy customers in the region have purchased more than 200,000 carbon offsets. Northern Virginia Community College, the second-largest community college in the country, is one WGL Energy customer that now offsets 100% of its emissions through CleanSteps.

LaRoche says the average residential customer uses about 1,000 therms of natural gas per year, which results in about five tonnes of carbon dioxide (CO2) emissions. In a sample D.C. zip code, that’s about half of a typical household’s total emissions per year and about a sixth of the total climate impact of its residents. LaRoche estimates that the average household would pay about $10 per month more to neutralize the carbon footprint of their gas usage.

In addition to buying offsets from existing projects, WGL Energy also gives a percentage of the money generated from the sale of carbon offsets to the Carbon Reduction Fund (CRF) managed by the Chesapeake Bay Foundation. The CRF is used to get early-stage projects – which often lack upfront carbon finance or other start-up money– off the ground. Both WGL Energy and Sterling Planet are contributing.

Mike Gailliot is weighing the possibility of a waste-to-energy project.

Over the years, these voluntary contributions have amounted to over $700,000 used for large-scale tree-plantings and incentives for farmers to adopt lower-carbon agricultural practices. Most recently, the CRF financed the planting of 1,200 trees at Springbrook Farm, a dairy farm in Frederick County, Maryland. Some of these projects will eventually be third-party verified as carbon offsets projects.

“Of course the hope is that eventually we’ll be able to use the verified tonnes from the Carbon Reduction Fund to partially offset those voluntary registrations [of CleanSteps customers],” said Ginger Williams of Sterling Planet. “That’s actually something that we really want to focus on in 2015 is trying to broaden that.”

From Trash to Electricity?

Now that the offsetting project is underway, the Gailliots are weighing the possibility of investing in the equipment needed to generate energy from the gas flare. They asked the Wegmans grocery store that recently opened next door whether they’d be interested in buying the electricity. Such a project would likely cost around $2 million to get up and running, Gailliot says, but the main barrier to implementation is actually expertise: he needs to find a project developer that would be interested.

He’s hardly alone. The EPA has identified at least 645 regulated landfills that have waste-to-energy projects and another 440 that aren’t currently generating electricity – but could – and no one really knows how many small, unregulated projects like Gailliot’s are out there.

If Hilltop were to create a waste-to-energy project, that would be the end of the clear-blue flare, which sometimes rises above the treetops and can be seen from the road, prompting nervous emergency calls.

“If I can get a waste-to-energy project going, the fire department would love me,” Gailliot jokes.