The people of San Roque de Cumbaza live in a region of environmental splendor but economic scarcity – and many once feared they’d have to abandon their traditions and their territory to make a living wage. Then, into their midst came a banker on a vision quest. What he saw changed his life and helped them to change theirs. 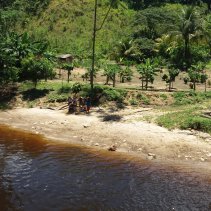 9 June 2017 | Rodrigo Ponce first came to the Peruvian district of San Roque de Cumbaza (SRC), at the western edge of the Amazon Rainforest, as a master’s student studying ecotourism. He came full of “romantic notions of living in ecovillages,” and he was woefully disappointed.

“When I first came to this town, I didn’t like it very much,” says Ponce, who studied economics as an undergrad and initially built a career in finance. “It was too disorganized, but eventually I realized that it has everything: indigenous communities, biodiversity, water … everything!”

It was also located in a buffer area of the Escalera Mountains Regional Conservation Area, which meant that people had to keep agriculture to a minimum and couldn’t engage in cattle farming or extractive activities. The 2,000 inhabitants mostly live by harvesting cassava, maize, peanuts, rice, beans, and fruits – with coffee and sustainable agroforestry-based cacao.

Ponce saw an opportunity, and today he runs Ecoaldeas Peru, a social business that helps rural communities leverage ecotourism, organic farming, and the harvesting of non-timber forest products to sustainably manage their forests. To build the company, Ponce drew on his banking background, blended with a new “mystic vision” he acquired while living in SRC, and – most importantly – the communities’ local knowledge to form three main lines of business: Consulting and Courses, Educational Tours, and Implementation of Eco -Technologies and Permaculture, which is basically sustainable agricultural systems.

“I had a good career that had given me confidence to be able to undertake new projects,” he says – adding that he also had the wherewithal to explore rural Peru and learn a bit about permaculture and even shamanism.

“My experience with shamanic natural medicine gave me the opportunity to realize that I could change my life and put my professionalism at the service of communities and nature through possibilities that I had no idea existed, such as permaculture and ecovillages; another way humanity lives in sustainable communities producing what they need and sharing resources,” he says.

He began experimenting with shamanic rituals in the early 2000s and followed this period by enrolling in grad school to study ecotourism.

In 2005, he  teamed up with friends to manage a New Age hostel in the SRC region, which gives rise to the Cumbaza River and supplies water to cities down river such as Tarapoto and Lamas. Between yoga, hiking, and psychedelia, he connected with the community and began to attend local assemblies.

“That’s where I realized that the economics I studied do not apply here,” he says. “It was a shocking experience because there are different means of exchange; such as barter. And different values; such as community wellbeing and knowledge-sharing, which are considered more important even than money. Things that they didn’t teach me at school!”

He launched the hostel for “Pashamama”, which is an indigenous word for “Mother Earth” that often colloquially means “just for fun”. But after learning how the community worked and its potential to attract many more visitors and expand the scope of the hostel, in 2008 they decided to make it into a serious endeavor. The group of friends first became entrepreneurs, and then they diversified: some of them still run the hostel, others started doing art, and Rodrigo, having already won the trust of the community through his continuous participation in community meetings, decided to finish his master’s thesis and accompany the community through their eco-tourism journey.

It would be five more years before Ponce founded his business – but those were key years of growth and change. First, an education-oriented NGO called the Centro de Estudios y Promoción Comunal del Oriente (CEPCO) began working in the area through a project called “Receptive Ecotourism in San Roque de Cumbaza”, which used ecotourism as a means of conservation and to boost the economy of those areas inside or near Natural Protected Areas such as SRC. With this came groups of foreign volunteers who began to organize cleanings of the area, which contributed to the interest and motivation of the locals.

In 2009, the community created the Local Tourism Management Committee (COGETUR). Thanks to the support of the local municipality, they built four bungalows, two viewpoints and a camp to receive more visitors.

In 2010, with the purpose of creating awareness in SRC’s new generations, CEPCO signed an agreement of collaboration in partnership with the Integrated Educational Institute (IEI) and the local municipality to create Pampa de los Niños de SRC (Children’s Pampa of SRC, PANI). PANI works as an ecological education park, which is operated by an environmental brigade of 25 young locals. They receive tourists, visitors and students to learn and practice ecology and conservation, such as mountain hikes where they visit lagoons, agroforestry areas, butterflies’ reservoirs, medicinal orchards and making their own compost. Thanks to this educational project, many people in SRC became interested in permaculture.

The projects worked, but more visitors meant a need for more infrastructure. In 2011, COGETUR went from being a Committee of 15 people to an Association (ACOGETUR) of 50 members divided into six sub-groups: tour guides, cooks, porters, organic farmers and women artisans working on 950 hectares of conserved forest.

Through the association, the group obtained funding for the project “Conservation of water and forests through community-based rural tourism” which created a beekeeper organization, strengthened capacities of guides and cooks, and invested in infrastructure. Ponce, who until that moment was an observer in the community meetings, became a guide helping them with bureaucratic red tape, logistics and legal matters.

“In the area, there was already a local process, and I came up with some ideas, which I had to adjust with community feedback, which allowed us to develop products with already empowered people,” he says.

Through workshops, fairs, and forums, Ecoaldeas forged additional partnerships with regional players – including the local government of San Martin, Brazilian permaculture institutes and universities and foundations that support social entrepreneurs along with commercial alliances with international tourism operators.

The high-level engagement allowed an additional influx of international tourists generating direct income to the community as well as indirect benefits to local groups in the form of road repairs, infrastructure improvements, patrolling and monitoring.

Ecoaldeas is both profit and mission-driven. The company arguably combines two of the best alternative tourism experiences in Peru, the Inca Trail (trekking) and the lowland rainforests in Madre de Dios, a region full of locally managed tourism, conservation and biodiversity.

However, it also created the Center for Research, Training and Development of Local Capacities, which works in agro-ecology, biodiversity conservation, organizational management, languages and technology. Ponce considers it to be one of the businesses biggest achievements.

The center adheres to the principle that technical training and education is central to spurring the future generation of environmental professionals, entrepreneurs and local leaders. Moreover, scientific research is a fundamental component for sustainable management of community forests.

“The project aims to create an economy that enables conditions for an evolution in technical strategies,” adds Ponce. “There are profits in the forests, not only in large REDD + (emissions reduction) projects, but also in biodiversity, water, and knowledge provided by locals. We are trying to bring ecosystem services to the market.”

Ponce notes the importance of recognizing ecosystem services especially in Peru where practitioners and conservationists argue nature-based planning could have significantly eased the massive landslides that killed more than 100 people, destroyed 14,000 homes and left 100,00 homeless and missing earlier this year.

“We need to be smarter about reducing our vulnerability to destructive weather events.”

Urban and rural design with a permaculture base is paramount, Ponce says. He has plans to take his eco-friendly urban management concepts beyond Peru. Ponce and partners are launching the Amazon Global School, a social and educational enterprise intended for all Amazonian nations.

The school is in development and something Ponce is working on, though he still has much to do in SRC. The district has more than 8,000 hectares of conserved forest, but only 950 of those are part of a ecotourism program. As locals grow to understand the benefits eco-tourism ventures have on people and planet alike, Ponce believes this number will rise.