Mexico’s forest people have a unique connection to the land and are proving to be effective forest monitors. For them to play a central role in the country’s new National forest monitoring system, however, their role needs to be better defined. Here’s how this could happen, by a network of community brigades working together with local research institutions and state government agencies. 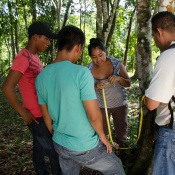 30 September 2015 | We were in the Mexican state of Calakmul, doing a field practice with members of a community brigade as they used different instruments to lay out conglomerates to measure forest biomass, when Manuel Arana, the lead technician, pointed out an innocuous-looking tree.

“Careful of that tree,” he warned. “That’s the Bad Prince – or Chechen in Maya – and it has a spore that will give you an itchy rash if you touch it.”

Then, he added, without a hint of his normally-present humor: “It will burn you even if you so much as look at it too long, and if that happens, don’t scratch the rash. People have died from doing that as it makes it spread and itch uncontrollably.”

We all jumped away from the threatening tree, inspecting ourselves for signs of any rash that might spread.

“But don’t worry,” he then assured us. “The cure is right beside him: the Good Princess,” he said, pointing out a similar tree beside it. “If you rub the sap of the Chakah tree on the rash, you can cure it.”

That, Arana said, is why the two are always found together: the cure for the ailment is often close by.  This, I reflected, is a metaphor for many things in life – the cure of the problem is often closer than we think.  It is also a humbling experience for those of us who believe we know more about forests than do the people who live in them, because the fact is: we don’t.  As Arana and his team demonstrated in the first installment of this series, community brigades can often execute forestry inventories better than external companies that are traditionally hired to do them.

These forest inventories are critical, because they will help the country determine how much greenhouse gas the forest is currently emitting and absorbing, which becomes the basis for its Emission Reference Levels. These, in turn, will be used as marker to measure future emissions reductions that result from the implementation of the National REDD+ strategy – and that means they will determine how much funding Mexico will be eligible for once these emission reductions are reached.

Mexico is currently preparing investment plans for its five Early REDD+ Action Areas (including Calakmul, among other areas), in order to submit to the World Bank to compete for payment-for-results funding from the Carbon Fund of the Forest Carbon Partnership Facility (FCPF).

In these jurisdictional areas, the three levels of government, together with local experts and communities, will use funds to align policies that aim to prevent the causes of deforestation, which in many areas are agricultural and livestock activities.

‘Public technical agencies’, such as inter-municipal boards, or decentralized government agencies, will supervise the implementation of funding that will leverage existing public financing so that agricultural, infrastructural, social and environmental policies are modified and aligned towards a common goal of integrated management of the territory and low emissions rural development.

These will not be designed or executed as individual projects, but rather part of a nationwide program. That means landowners will not receive direct cash per ton of carbon dioxide that is mitigated.  Instead, funding will support a wider integrated policy approach, that support activities on the ground implemented through ‘Technical development agencies’, which are legally constituted organizations or associations.

Activities on the ground that are likely to be supported are silvi-pastoral systems, non-timber product harvesting, reforestation, agroforestry, forest fire management, ecotourism among others.  These activities will be implemented according to regional investment plans that will justify the activities based on in-depth studies of the causes of deforestation and local contexts.

For REDD+ to work over the long haul, we must involve communities in identifying viable activities that could work on the land without harming the forest, as well as in monitoring the success of these activities in terms of forest biomass that remains standing.

Communities can also help to collect information about other social and environmental safeguard indicators, which have been agreed in the UNFCCC as a vital part of the REDD+ mechanism, which aim to assure that there is no negative impact of the REDD+ policies being implemented on communities or biodiversity.

Communities and ejidos have traditionally been on the receiving end of conflicting and contradictory policies that destroyed their forests.  In Calakmul, for example, it’s often easier to log illegally than it is to develop an authorized community forest management program, because the permits that communities need to legally sell products from the forest are often stuck in bureaucracy and unnecessarily costly, while illegal loggers can simply sneak out their harvest by paying off the poorly-remunerated guards on their way out.

Under the proposed REDD+ regime in Mexico, local governance and law enforcement mechanisms and capacities will have to be strengthened in order to effectively stem the causes of deforestation. The mechanism to distribute benefits fairly among landowners, women and young people who help to protect the forest is yet to be determined, and will have to become more inclusive than Payment for environmental services programs in Mexico that have traditionally benefited mainly male landowners and suffered from corruption between technicians and local authorities.

Rural people and indigenous communities are central to this strategy, but they are still on the margins of the REDD+ politics – they often get tired of workshops just talking about REDD+, emissions reference levels and safeguards – they want to know WHEN it will be happening, and HOW it will translate in terms of opportunities for them.

(Indigenous people in Brazil are also growing weary of the endless meetings, as you can see here.)

There is still time to correct this, as both the National Forest Monitoring System and the National REDD+ Strategy are still under construction, and it is not yet clear how communities and local scientists will be incorporated into the system, decision making or policy implementation, year-by-year.

One way forward is to linking communities with the National MRV system through local research institutions and state and municipal governments to create a network of community monitoring, but this will require a scaling up of local capacity building.  This ensures longer-term sustainability as communities and local institutions are likely to stick around in the long run, and is less costly than bringing in external consultancies to do the monitoring and reporting in the short run, which often happens in developing country contexts.  This will also help generate job opportunities to more young people like Yoni, Sara and Manuel in rural areas, and improve the ownership of REDD+ for local communities.

Delegating Power and Responsibilities to the Local Level

Evelia Rivera, the former secretary of Environment in Campeche, is a firm believer that “All policy should be developed based on the knowledge generated by investigators and institutions that are dedicated to the field.” She explains how in Campeche, local universities, as well as other sectors and different levels of government agencies, have been brought together in sustainable development committees to inform and discuss policy developments.

However Rivera notes that state governments are still a long way off from having an impact or say in the development of national level REDD+ policy, which is crucial in order to respond to local needs and contexts.  In addition, at the national level it has been slower and more difficult to bring the Agricultural and Livestock Ministry, as well as the Ministry for territorial, urban and agricultural development and Indigenous People to the discussion table.

With the National Forest Commission facing a 50% cut in funding, local capacity building is likely to be far down on the long list of priorities.  However, delegating responsibilities to local institutions and communities for forest monitoring could be a cheaper and more effective alternative, whilst maintaining similar nationally-led guidelines and methods for accounting and reporting purposes.

Strengthening local capacities in order to design and implement locally appropriate policies is often a slow and lengthy process with less visible but longer term impacts. However, the costs of bypassing local communities, local research institutions and state governments is high in the long run, and their participation may well be crucial for the ultimate success of payment-for-performance programs such a REDD+.