Aggressive farming devours topsoil and depletes the naturally-occurring carbon and nitrogen, while agroforestry infuses those nutrients into the ground. In 2010, the environmental NGO VI Agroforestry embarked on a groundbreaking experiment to see if it could tap carbon markets to promote sustainable agriculture. 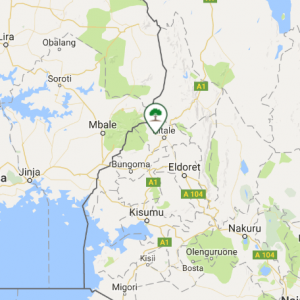 This is the second in a continuing series on Kenya’s agroforestry revolution and has been adapted from material to appear in the book “Carbon Cowboys and REDD Indians”. You can read the first installment here.

15 February 2017 | BUNGOMA | Kenya | Makanda Khisa had just been given a powerful new tool for helping smallholder farms in Kenya increase their yields and incomes, but he feared that deploying it too soon could do more harm than good. So he approached Prisca Mayende the way he had tens of thousands of other small farmers across Kenya.

“He showed up on his motorbike, and asked me if I’d be interested in planting trees,” Mayende explains in part one of this series.

“He told us of the importance of planting trees…to improve our livelihoods…because trees improve soil and yields,” she says. “One [other aspect] that people liked was firewood: sesbania is firewood, and also fodder.”

With fodder, Khisa told her, she could buy a cow and enter the dairy business, while trees would also protect her farm from floods in the wet season and from excess sun in the dry season. One thing he didn’t talk much about was that potentially powerful new tool: namely, the ability of farmers to earn carbon credits for adopting agroforestry.

By 2010, when Khisa first visited Mayende, conservationists had already pioneered the use of carbon finance to save forests and plant trees by getting companies to pay for the carbon captured in the wood – which those companies then used to offset their own greenhouse-gas emissions.

Khissa’s employer, the environmental NGO VI Agroforestry, was using carbon finance, too, but in a completely different way: instead of generating offsets for the carbon locked in trees, they were generating them for the carbon those trees injected into the soil.

It’s an idea that scientists had been kicking around for years as a way of replenishing topsoil across Africa and even in the United States, while Khisa had even seen a pilot project in the nearby Komothai Smallholder Farmers Cooperative. He knew that climate-safe agriculture worked, but the general sense was that the amounts of carbon captured in soil are simply too small to be worthwhile for small farmers.

Still, VI Agroforestry aimed to persuade 60,000 farmers to plant trees on their farms, and the World Bank had agreed to pay $5 for every ton that VI Agroforestry could prove it had pulled out of the atmosphere. The Bank agreed to pay the price in order to test a new methodology being tested by the Verified Carbon Standard – one that could lower the costs of measuring the carbon by verifying activities instead of digging in the dirt.

The target amount was 150,000 tons of carbon dioxide, and VI Agroforestry figured it would reach that if it brought 60,000 farmers into the program. Then they decided to use 35% of the money to cover their operating costs and give 65% to the farmers.

In theory, this gave Khisa a powerful tool for recruiting farmers, but he was leery of bringing it up too soon – in part because the payments would be so long in coming, but also because he’d done the math and knew they wouldn’t amount to much on a per-farmer basis. He also worried they might distract from the real benefit of agroforestry.

“All farmers want to increase their yields, and that’s the true advantage of this program,” says Khisa, who goes by the name “Johnny” and spends most days bouncing around the countryside on his motorcycle, either looking for new recruits or checking in on farmers who’ve already joined the program.

“I look for those who are open-minded about planting trees on their farms and who are respected in the community,” he says, “but they start adopting at different levels: some are early adopters; some come in the middle; and others are just laggards.”

If the early adopters succeed, he says, the fence-sitters will come more quickly, and the laggards might not lag as much. But shifting to agroforestry involves more than just planting trees – it requires first breaking the farm into different fields through a process called “farm plan layout”, then determining how to allocate crops among those fields, then keeping records to see what works and what doesn’t, and finally tweaking the whole process – continuously over time.

If the combination of sun, soil, and rain is right, yields will ratchet up within months as newly-planted trees pull carbon and nitrogen out of the air and infuse it into the earth to nourish hungry cabbages and potatoes. But yields almost always fall at first, and recovery is a matter of trial and error.

Khisa could easily ratchet up the number of early adopters by sugar-coating the challenge they were undertaking, but he knew it could all go sideways if those early adopters got frustrated and dropped out.

“Agroforestry is hard work, and I wanted early adopters who were serious,” says Khisa. “I didn’t want to build unrealistic expectations.”

So he downplayed the carbon component but told potential recruits that a “carbon bonus” might come their way if they kept good records of their outputs and yields.

…in the next installment of this series: “Pitching the Neighbors, Planting the Trees”.