For over 20 years, indigenous people of the Amazon have been using “Life Plans” to manage their forests sustainably, but most of them struggled to find the money needed to get the plans off the ground. Forest-carbon finance seemed to offer an answer, but REDD+ as initially structured in the voluntary markets didn’t always match indigenous values. Now, it does. 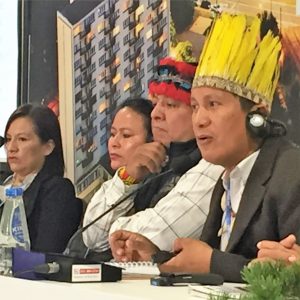 RIA was initiated in 2010 by the Peruvian indigenous association AIDESEP (Interethnic Association for the Development of the Peruvian Rainforest), and it blends the carbon accounting of REDD+ (Reducing Emissions from Deforestation and Degradation) with traditional indigenous agroforestry strategies that conserve forest while producing fruits and other non-timber forest products. It also layers in recognition of collective land rights specific to indigenous peoples.

Indigenous leader Juan-Carlos Jintiach formally announced RIA in 2011 at year-end climate talks in Durban, South Africa, and championed it in global climate talks as head of the Coordinated Indigenous Organizations of the Amazon Basin (COICA). When Jintiach stepped down, Tayori, who is President of Peru’s National Association of Communal Reserve Leaders (ANECAP), became its champion in global talks.

The two men appeared together this week in Katowice, Poland, to outline the progress to date and to urge further expansion into forests beyond indigenous territories.

Tayori says that his own people, the Amarakaeri, have implemented the REDD+ program across their territory, the Amarakaeri Communal Reserve (RCA), which covers more than 400,000 hectares in the Peruvian state of Madre de Dios.

Critically, he adds, the project was implemented jointly with the state and federal government as part of Peru’s Climate Action Plan, or Nationally-Determined Contribution (NDC) to the Paris Climate Agreement. That, he says, had knock-on benefits for territorial governance beyond climate.

Berioska Quispe Estrada, a specialist in Land Use, Land-Use Change, and Forestry within Peru’s Federal Ministry of Environment (MINAM), agreed, and said RIA could serve as a template for conservation projects across the country.

“We included community management of forests in our NDC, and we want to develop community-based mechanisms for conservation,” she said. “We have 54 million hectares that are committed for conservation, and RIA is one of the most important pillars of this effort, because we can create similar mechanisms.”

Jintiach said the template could be spread beyond Peru, to indigenous territories across the Amazon.

“Indigenous people are currently protecting 200 million hectares of forest across the Amazon,” he said, displaying a map that overplayed indigenous territories with deforestation rates. “We need your support if we are to prevent the planet from reaching the 1.5 degrees Centigrade threshold, and RIA offers a mechanism though which you can offer that support.”

The Peruvian government hopes to attract carbon-based payments based on reduced rates of deforestation, and she says the money will go directly to the communities.

“In developing this program, we have developed a system for making conditional direct transfers to communities,” said Estralda. “The Amarakaeri have always been good stewards of the land, but they have been able to reduce deforestation even further in the last few years thanks to this program.”

2 thoughts on “In Katowice, Indigenous Leaders Call For Wider Uptake Of REDD+”