China’s insatiable demand for rosewood is driving illegal deforestation across Southeast Asia and Africa, killing forests there and sowing civil strife, according to a new report by Ecosystem Marketplace publisher Forest Trends. Here’s a look at the findings, and also at potential solutions. 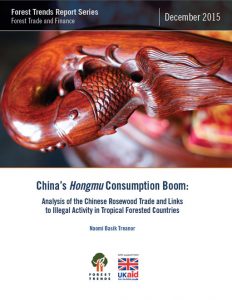 22 December 2015 | Rosewood has fast become a hot commodity in the Far East, particularly China, where the dark red and oily-textured species connects today’s generation to days of old while also representing new wealth. Used primarily for constructing classical Chinese furniture and décor, the value of imported rosewood into China reached US $2.6 billion in 2014, doubling its value from a year earlier – and, according to a new report by Ecosystem Marketplace publisher Forest Trends, drives massive amounts of illegal deforestation, contributing to smuggling, fraud, corruption and ethnic and political strife.

Environmentally, this rosewood species sits within the family of slow-growing hardwood trees known collectively as hongmu, which grows in some of the most biodiverse forests of Southeast Asia and Africa. China’s explosive demand for the wood is putting these forests at significant risk along with the forest communities dependent on hongmu for their livelihood, fuel and medicine.

“There is strong evidence that this booming demand is being met by rosewood that has been illegally harvested, with dire consequences for complex ecosystems in some of the world’s most biodiverse forests,” said Naomi Basik Treanor, the report author and Manager in Forest Trends’ Forest Trade and Finance program.

Tracking the impacts are difficult, but Basik Treanor finds that Chinese demand for rosewood is driving bad practices across several forested nations.

Where has all the Rosewood Gone?

For instance, 95% of rosewood listed as coming from the Gambia is actually coming from Senegal, and its harvest is contributing to a separatist movement along the nation’s southern border, the report said. African rosewood is actually of a lesser quality, according to the report, but China’s own rosewood forests were depleted long ago and other traditional sources from such places as Vietnam, Laos and Cambodia are fast disappearing. To a lesser extent, the trade is entering Latin America’s rosewood-growing forests, but mostly it’s turning to Africa. According to the report, China experienced a 700% increase in African rosewood logs and sawnwod since 2010.  An earlier investigation estimated that only 1% of Malagasy rosewood, a species native to Madagascar, remains in the country, as 98% was exported to China. The trade involves up to 20 major Chinese buyers.

Senegal and the Gambia have logging bans on rosewood in place, but they’re constantly violated not only in those countries but several others: Mali, Nigeria, Togo and elsewhere. Madagascar too has a ban in place but lax enforcement allows illegal extraction and export to continue.

And the trade is still ongoing in Asia as report authors found transnational crime syndicates are exploiting remaining valuable rosewood. More than 150 people have been killed enforcing laws related to rosewood in recent years, according to the report. Like in Africa, bans are in place in these nations but complex supply chains, ripe with corruption and cronyism, allow industry actors to bypass international rules and flaunt domestic bans. In some countries like Myanmar, timber sales are deeply intertwined with ethno political conflicts.

Overall, the report notes that lax central authority in most border areas allows for illegal activities to flourish. The report also found evidence that large quantities of rosewood from countries with high reported rates of deforestation and poor forest governance arrived in China through Hong Kong’s much less monitored ports.

However, all isn’t lost. On the contrary, Basik Treanor highlights existing opportunities for China to stem the loss and change the direction of the rosewood trade.

“Given their role in the global trade of rosewood, China’s consumers and government are in a unique position to take a leadership role in ensuring that only legally and sustainably sourced rosewood enters the country,” said Kerstin Canby, Director of Forest Trends’ Forest Trade and Finance Program.

Canby notes existing frameworks China has in place as well as systems in the works related to the sale of rosewood. Under the Convention on International Trade in Endangered Species of Wild Fauna and Flora (CITES), the nation’s government has added additional control measures on listed rosewood species. However, the report notes that CITES’ mention of particular rosewood products, like logs, timber and veneer, make it easy for bad actors to circumvent the rules by simply adding a slight modification to their product; documenting rosewood logs as semi-finished, for instance, which doesn’t fall under CITES’ scope.

The state also has a number of standards related to rosewood, though many of them don’t cover legality issues. Industry experts and analysts are debating whether the National Standard for Hongmu, which doesn’t explicitly address illegal sources in the rosewood trade, should be enhanced or abandoned for a more binding instrument.

And China has a suite of other initiatives designed to combat these illegalities that include voluntary guidelines and agreements with other countries to encourage legal trade. “These mechanisms could serve as a foundation for more robust and legally binding legislation to curb illegal timber imports,” Canby said.

The report laid out steps the Chinese government should take to build on this foundation. They include strengthening standards and utilizing existing agreements China has with the forested nations producing rosewood. Further steps also include creating a rosewood document tracking system that follows its supply chain from start to final destination. Enacting demand-side legislation that promotes sustainable timber imports is another.

Perhaps one of the most important steps isn’t for the Chinese government but for the rosewood-producing countries. These places would need to develop or strengthen legal frameworks that include environmental and social monitoring as well as disclosure over non-compliance.

For now, many researchers and others involved in the space believe addressing change through CITES is most effective, despite the loophole. And recently, Vietnam and Thailand proposed closing the loophole as well as protecting another rosewood specie, a replacement type called Siamese, by listing it under CITES. The region drew up an action plan last year, which was supported by all parties, including China.