Last year was a record breaking year for forest carbon finance as payments for emissions reductions reached $257 million, amounting to nearly 34 million tonnes of avoided emissions, according to Ecosystem Marketplace’s new report, “Converging at the Crossroads: State of Forest Carbon Finance in 2015. 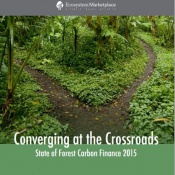 This story first appeared on Mongabay. Click here to read the original.

4 November 2015 Ecosystem Marketplace’s new report on forest carbon finance finds that financing from both the public and private sectors intended to protect forests and their ability to mitigate global warming has indeed been ramping up, but whether or not that trend continues will depend greatly on the outcome of UN climate negotiations to be held in Paris in a few weeks.

Deforestation and forest degradation account for about 10 to 15 percent of global greenhouse gas emissions, the report notes, meaning that mechanisms for keeping forests standing will be vital to the success of efforts to curb climate change.

Over the past decade, companies and governments worldwide have provided some $5.1 billion to initiatives to safeguard threatened forests, promote less carbon-intensive land management strategies and plant new trees, according to the report.

More than $700 million of that financing was pledged by governments and companies in 2014, a year that saw forest carbon finance reach a crucial tipping point in which financing to help developing countries prepare for participation in deforestation-reduction schemes shifts towards payments for actual avoided deforestation, writes Forest Trends’ Allie Goldstein, author of the report.

About $2.8 billion has gone to 13 key tropical forest countries to help with “readiness” efforts, per the report, while $2.4 billion in results-based payments have been made for verified emissions reductions.

But that balance is now tipping, Goldstein and team found. Last year, payments for emissions reductions reached a record-high $257 million, exchanged for the equivalent of some 34.4 million metric tons of greenhouse gases. 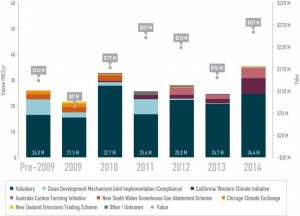 That makes 2014 the first year that payments for verified emissions reductions exceeded the $229 million in new finance made available every year under the UN’s Reducing Emissions from Deforestation and forest Degradation (REDD)mechanism to help tropical forest countries and their various institutions build up their capacity to combat deforestation.

“We’re at a critical crossroads in the fight to save tropical forests, and with them, our chance at a livable climate,” Goldstein said in a statement. “The majority of the money meant to get countries ‘ready’ to receive results-based payments has been disbursed, and now it’s time to pay for emissions reductions.”

The big increase in results-based financing last year was due in large part to demand for forest carbon offsets growing by 200 percent in markets like those established by California and Australia. These are what are called “compliance markets” because they require companies operating within their jurisdiction to meet certain emissions reductions targets by reforming their business operations or to offset those emissions by purchasing carbon credits.

Goldstein writes in the report that voluntary demand for forest carbon offsets also grew by nearly 20 percent in 2014. 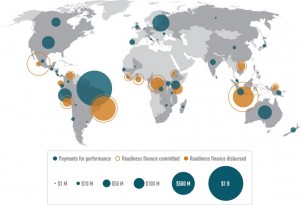 An additional $219 million in finance arrived in the form of non-market, bilateral payments from the governments of Norway and Germany to help reduce deforestation in Brazil and Guyana, according to the report. Taken together, all of these various streams of money flowing to efforts to reduce emissions from deforestation accounted for two-thirds of all new forest carbon finance in 2014, Goldstein writes.

The report warns that the future of forest carbon finance is highly dependent on policy developments at the national and international level. The results of the Paris climate negotiations will have perhaps the most influence on forest carbon finance in the coming years, as a Forest Trends analysis shows that at least 57 developing countries have submitted climate plans to the UN that include two sets of emissions reductions goals, with the more ambitious targets being conditional on the level of international financing made available.

“But they need a strong signal that companies and developed country governments are ready to pay for those assets. The Paris negotiations need to pave the way for the continued expansion of performance-based finance for emissions reductions.”