Brazilian president-elect Jair Bolsonaro wants to ratchet up development in the Brazilian Amazon, which would lead to a surge in greenhouse gas emissions. Indigenous people, the “guardians of the forest”, have vowed to stop him, but they can’t do it on their own. Indigenous leader Nara Baré hopes to build global support for Amazon protection. 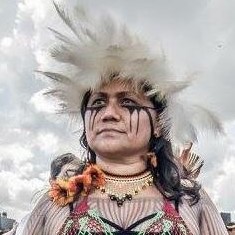 13 December 2018 | KATOWICE | Poland | The election of Jair Bolsonaro as President of Brazil sent a chill through the country’s 900,000 indigenous people, who control 21 percent of the Amazon forest and have consistently proven to be among the best stewards of the land, with deforestation rates one-seventh those outside of indigenous territories.

They’ve been called the “guardians of the forest”, but Indigenous leader Nara Baré says that’s not how the incoming president views them.

“Bolsonaro sees indigenous people as a threat to the economic development of the country, and he has no awareness or understanding of what climate change is or how government policy can impact it,” she says. “He doesn’t understand that there’s a problem, so he doesn’t even get to the point of understanding that indigenous territories are part of the solution.

When Bolsonaro takes office in January, he plans to move the National Indigenous Agency (FUNAI) from the Ministry of Justice to a new – and less powerful – Ministry for Women, Family and Human Rights overseen by an evangelical preacher named Damares Alves, who plans to increase missionary work on indigenous territories and, most alarmingly, send missionaries to the 103 indigenous communities that have chosen to live in isolation.

Such contact was once common practice, but it was abandoned decades ago because of the diseases that inevitably followed, as isolated people with no exposure to mumps, measles, and other diseases quickly succumbed in concentrated outbreaks.

Bolsonaro justifies the practice of reaching out to uncontacted people by comparing their current status to that of animals in a zoo, and he said he wants to permit commercial mining and farming on indigenous territories without indigenous consent.

Baré has supported negotiations at year-end climate talks (COP24) here both directly and through the Indigenous Peoples’ Caucus, which spearheaded the inclusion of a Local Communities and Indigenous Peoples Platform, in the Paris Climate Agreement. That platform, which is a representative body that acts as a conduit between indigenous peoples and the United Nations Framework Convention on Climate Change (UNFCCC), became operational on Saturday.

We caught up to her on the sides of the talks to find out how she plans to maneuver the treacherous year ahead. This conversation has been edited for clarity and brevity.

Steve Zwick: Why don’t we start with the launch of the Local Communities and Indigenous Peoples’ Platform, which launched on Saturday and provides a global form for Indigenous issues within the UNFCCC. What value does this platform bring?

Nara Baré: It brings tremendous value, because it has globally reaffirmed the rights of Indigenous People, and it formally recognizes that our way of life balances the climate and generates ecosystem services that were previously ignored. It also recognizes that we’re risking our lives to do so, and it provides a way for us to share our traditional knowledge with the world – knowledge that we’ve passed down from generation to generation within the indigenous territories, and which we can now spread around the world for climate protection.

SZ: Now for the big challenge ahead: the election of Jair Bolsonaro. Is this as worrisome as those of us on the outside perceive it to be?

NB: Yes, we are very worried – not just by his intent, but by the lack of information and the lack of preparation. This applies not only to the president-elect, but to all of his staff and all of his ministers, and now to the future Minister of Environment, Ricardo Salles.

Bolsonaro is a narrow-minded man, and his whole government has a fascist way of thinking. He actually says that climate change is a myth concocted by communists, and that people who believe in it pose a threat to national sovereignty.

He sees indigenous people as a threat to the economic development of the country, and he has no awareness or understanding of what climate change is or how government policy can impact it. He doesn’t understand that there’s a problem, so he doesn’t even get to the point of understanding that indigenous territories are part of the solution – kind of like your own president, Donald Trump.

SZ: Yes, they call him “Tropical Trump”. Do you think the Local Communities and Indigenous Peoples’ Platform can be leveraged to counterweigh his plans?

NB: I don’t know that the Platform is the best vehicle for that, because it’s a part of the Paris Climate Agreement, and the other day Bolsonaro announced that Ricardo Salles would be Brazil’s new environment minister. Now, Salles has consistently insisted that Brazil should pull out of the Paris Climate Agreement. If that happens, the Local Communities and Indigenous Peoples’ Platform will not have an impact within our country. Instead, the impact will be felt in other countries and in civil society as a whole, and I hope that Bolsonaro will be forced to compromise because of outside pressure.

The world should support us, the indigenous people of Brazil, so that we can continue to protect the Brazilian Amazon, which supports us all.

Steve: What options do you have open to you?

NB: We’re going on the assumption that, for the immediate future, we will not have any opportunities for political actions coming from inside Brazil, so we’re making our voices heard in international spaces like here at the COP and in other United Nation Organizations and at the Inter-American Court of Human Rights in Costa Rica.

We need to tell our stories, which are different from the stories that our national government is telling.

This is important because even if Brazil pulls out of the Paris Agreement, it’s still party to a lot of other international agreements, but it is not honoring them. This provides a pressure point for us.

Steve: Earlier this week, Carlos Rittl of the Climate Observatory said he didn’t think Brazil would pull out of the Paris Agreement, because it would hurt them financially, and Salles also seemed to soften his stance, but you don’t seem to be giving that much credence.

NB: The problem is that this new government isn’t very serious in its actions. They have one position one hour and a completely different one an hour later, so we are not in a very stable situation right now.

Having said that, I want to reiterate that international political pressure can be effective if it impacts the economic interests of Bolsonaro’s backers, and we know who they are. He owes money to members of parliament who are aligned with cattle ranchers and landowners, and these are the people who are interested in deforesting the Amazon and expanding agriculture.

He’s also talked about the expansion of mining into indigenous territories, which will contaminate the water, and he’s talking about the construction of highways across the Amazon and more hydroelectric power plants. He doesn’t think about nature and climate, but only about very narrow economic development that benefits very few people, and these are the people the international community can pressurize.

The biggest problem is that the greatest threat is to those with the smallest voice – the 103 indigenous communities that choose to live in isolation.

SZ: Yeah, the new head of FUNAI, Damares Alves, wants to contact them.

NB: She’s a missionary, and she was president of an organization that solicited donations to go out and spread God’s word to indigenous people, and she stated that uncontacted indigenous people should be contacted so that they can be lifted out of poverty. But such contact is devastating for isolated people who haven’t been exposed to disease. That’s why Brazil implemented policies to protect these people and respect their wishes to remain in voluntary isolation.

But worse than appointing her is Bolsonaro’s plan to restructure FUNAI. Up to now, it’s been part of the Ministry of Justice, so it had law-enforcement authority to protect indigenous peoples living in voluntary isolation as well as indigenous territories in general. Currently, any company that wants to do business on indigenous lands has to go through FUNAI, to demonstrate that they won’t have a negative impact.

SZ: I know you have to run, but do you have any final words?

NB: I just want to invoke everyone to take a stand – to say, “I choose to be with the indigenous people of Brazil in the resistance, and to exercise persistence for their existence.” Because if there are no more indigenous peoples on the Amazon, the Amazon will die with us.

You can hear the full interview on an upcoming edition of the Bionic Planet podcast, which features our fourth annual mid-session stock-taking with key representatives from leading environmental NGOs. The wide-ranging discussion includes Chris Meyer of the Environmental Defense Fund (EDF), Josefina Braña Varela of the World Wildlife fund (WWF), Jason Funk of Carbon 180, Peter Graham of Climate Advisors, and David Burns of the National Wildlife Federation. You can hear the entire discussion on RadioPublic, iTunes, Stitcher, or wherever you access podcasts – as well as on this device here: