Brazil’s SOMAI Alerta Indígena platform helps indigenous territories plan for climate change, but so far it’s only been available in places with reliable internet. A new mobile app could spread the access and make it more responsive – but only if funding materializes. Thanks to Google, that may be about to happen. 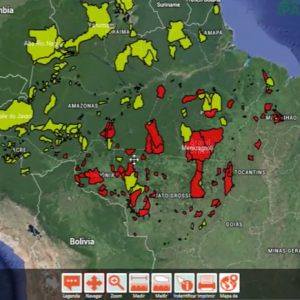 10 June 2016 | The indigenous people of the Amazon have always worked in partnership with the forest – so much so that some of their traditional farming practices even created, rather than depleted, topsoil at the rate of one centimeter per year.

Those practices faded with the arrival of more intense but less sustainable farming, yet climate change is bringing them back as more and more indigenous territories face droughts and floods.

To effectively adapt to climate change, however, indigenous farmers have to understand how climate change will impact their territories – and that’s where an online platform called SOMAI Alerta Indígena comes in.

Launched in 2014 by the Amazon Environmental Research Institute’s (IPAM) Indigenous Study Center, with funding from USAID through the Accelerating Inclusion and Mitigating Emissions (AIME) program, SOMAI Alerta Indígena is short for “System of Observing and Monitoring of the Indigenous Amazon”, and it provides the latest science-based projections through the year 2050 on a territory-by territory basis. It works by blending 17 climate models from the IPCC (Inter-governmental Panel on Climate Change) with historical data from 2000 to 2014, which helps understand the deforestation patterns and its climate impacts in the Amazon and the changes that might occur in the future.

Although much of the technical data is readily available, it wasn’t presented in a way that could be accessed by indigenous territories. IPAM worked with indigenous leaders through federations like COIAB (Coordination of Indigenous Organization of Brazilian Amazon) to create a platform that indigenous people can relate to, and that lets users zoom in on their territory to see rainfall and temperature projections, as well as seasonal extremes.

Phase Two calls for the introduction of a mobile-phone app to provide constant feeds about droughts, rains, and temperatures while making it possible for indigenous groups to upload data collected in their territories into SOMAI´s database, providing a feedback mechanism that can fine-tune projections.

That phase, however, has been on hold due to lack of funding – a hold that could end if SOMAI earns one of the top four slots in Google’s Impact Challenge 2016, which would net it roughly USD $430,000 (Brazilian Real $1.5 million). The challenge identifies regional nonprofits that use innovation to improve a variety of global situations and then allows the public to vote on the projects they feel are delivering the most impact. SOMAI is one of ten finalists to be selected by this popular vote, which ends on June 13th. The winners will be announced the next day at an event in Sao Paulo.

“The Google recognition over the SOMAI project translates into having the support to decrease the gap between the information produced by researchers and the people that need that information to develop adaptation strategies – namely, the indigenous people of Amazon,” says Fernanda Bortolotto, a researcher in the Indigenous Study Center at IPAM.

A Harvest of Information

Researchers are currently updating SOMAI with 2015 data gathered through Google and official images banks such as PRODES – Brazil´s deforestation monitoring database – which is available online. These databases were used for mapping deforestation, precipitation, drought and biodiversity with a primary focus on indigenous territories.

While the current scope is the Brazilian Amazon, Bortolotto says it’s entirely possible for SOMAI to include all Amazonia countries and every climate in Brazil once data is available for these regions.

Have You Heard? Bionic Planet: a New Podcast for the Anthropocene

Currently, climate projections have a long term scope, forecasting to 2070. However IPAM is working with indigenous people in the field to monitor changes that are already happening in their territories, and then cross this data with predicted changes to prioritize needs and inform decision-making.

To facilitate the understanding of the platform, the site also contains videos with indigenous testimony and presentations about climate change impacts.

During 2015, IPAM held three workshops to obtain feedback: one with indigenous peoples, one with Brazil’s National Indian Foundation (FUNAI) and one with students from the Indigenous Studies Master of the Federal University of Goias.

“After these workshops, we realized that besides having a technical component, we also have an educational side where discussions can occur,” says Bortolotto.

Since the platform depends on official data, updates are made once a year, but thanks to climate impact projects in the territories, participants want to achieve more frequent updating and generate weather alerts for indigenous people.

Enhancing the platform’s accessibility, so it’s not just for those with a reliable Internet connection, is another goal. Translating the information into suitable languages for indigenous people is one such way to do that.

Ideally, the SOMAI will be linked to some sort of government program, so if the satellites monitoring deforestation detect irregular activity in an ecologically significant area, the authorities can investigate these actions and hold the right people accountable.

This tool is constantly evolving as researchers continue to improve on it and this regulatory component is something they have planned for down the road. However, late last year IPAM, along with Brazil’s Ministry of Environment, presented SOMAI to the Secretary of Climate Change, allowing the secretary to include the platform in a special chapter of adaptation, currently in development, and perhaps sealing the tool’s fate as a climate adaptation tool. Brazil’s national adaptation plan was in public consultation last year and the new version is about to be launched.

For now though, the satellite focuses on demonstrating how ongoing deforestation is connected with climate change. On some maps it is evident that in the most deforested regions, there are more droughts.

“A control platform is an informative tool. With this data, correlations and mitigation plans are made mainly for the insulated territories with high rates of deforestation,” says Bortolotto.

SOMAI was chosen by the Ministry of Environment to be part of the Nairobi Work Plan, established by the United Nations Framework Convention on Climate Change as a mechanism to facilitate knowledge sharing on climate adaptation across sectors. Bortolotto says what the platform needs most now is direction, instructions on how to proceed.

“We have the government approval, we need the development,” she said. That may take time, so during the wait Bortolotto said they will work on deepening collaboration with organizations to prove the platform’s functionality and creating synergies with the government’s existing work.

IPAM is a part of the Forest-Based Livelihoods (FBL) Consortium, a partnership of nine environmental and indigenous organizations led by Ecosystem Marketplace’s publisher Forest Trends. FBL initiated AIME, a five-year program with the support of USAID to empower forest-dependent communities in Brazil, Peru, Colombia, Central America and Mexico to more fully contribute to and directly benefit from climate change mitigation and forest conservation efforts.