Ethiopia plans to be climate-neutral by the year 2025, and it aims to generate jobs in the process. How? By overhauling its rural economy to support more sustainable agriculture and regenerate millions of hectares of degraded forest. 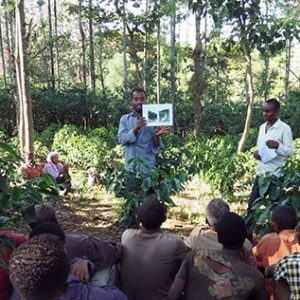 16 January 2018 | According to legend, a young man named Khalid discovered the invigorating effects of coffee while herding his goats through the misty, mountainous forests of Kaffa, at the eastern edge of the Kingdom of Abyssinia, around 750 AD. The animals, it’s said, became rambunctious after devouring the red berries for which the region is named, so Khalid ate some as well, and the rest is history.

To this day, Abyssinia – or the land we now call Ethiopia – is Africa’s largest producer of coffee, and 15 million Ethiopians earn their living growing it, roasting it, or processing it.

But it’s a precarious economy embedded in a fragile landscape that’s lost 90 percent of its forests since Khalid’s discovery. The United Nations Environment Program (UNEP) lists Ethiopia among the ten countries most vulnerable to climate change.

At the same time, UN data shows Ethiopians are among the most climate-innocent people on the planet. The average Ethiopian, for example, generates just 1.3 metric tons of greenhouse-gas emissions per year, while the average American generates about 20 tons, and the average Kuwaiti generates a staggering 60 tons.

Like many governments, Ethiopia’s is under pressure to reduce poverty and create jobs. Unlike that of the United States and others, however, it’s responded by reducing its greenhouse-gas emissions even further, with a target of net zero by 2025, while helping farmers improve their lives.

More importantly, it’s well on the way to achieving that goal.

Learn More on the Podcast

For a more detailed understanding of how the various World Bank carbon funds converge on the state of Oromia, check out episode 27 of the Bionic Planet podcast. The episode features interviews with Elly Baroudy, who coordinates both the FCPF and the ISFL, and Karin Kaechele, who acts as the point person for both funds within Mozambique and Ethiopia. It is available at Bionic-Planet.com and through iTunes, TuneIn, Stitcher, or directly on this device here:

Like all signatories to the Paris Climate Agreement, Ethiopia submitted a Climate Action Plan – technically called an “NDC” (Nationally-Determined Contribution) – to the United Nations Framework Convention on Climate Change (UNFCCC).

Their NDC came embedded in a broader Climate Resilient Green Economy strategy, which grew out of an existing effort to boost productivity on farms – in part by planting shade trees in among coffee plants, but also by spreading solar energy across the countryside and helping local communities regenerate 22 million hectares of degraded forests by 2030 – a plan that amounts to nothing less than a complete overhaul of the agriculture sector.

Key to the program is something called “participatory forest management” – essentially working with communities to help them coordinate management of their forests, in part by teaching modern agroforestry, but also by setting up self-governing cooperatives.

“Under participatory forest management, the communities are responsible for patrolling the forest andfor taking care of it,” says Karin Kaechele of the World Bank. “But they can also extract non-timber products: honey, coffee, etc.”

The country as a whole is on target to regenerate 5 million hectares by 2020, which sets up the 2025 goal of being carbon neutral across the entire economy as growing trees absorb industrial greenhouse gasses. If all goes according to plan, the country’s economy will be climate negative even before 2030, meaning it will absorb more greenhouse gasses that it emits.

That has knock-on benefits for the rest of the world, which is one reason the United Nations is using carbon finance to support the effort through two key trust funds – the Forest Carbon Partnership Facility (FCPF) and the BioCarbon Fund, which hold and distribute money on behalf of donor countries like Norway and the United Kingdom.

The concept emerged in the 1970s, when physicist Freeman Dyson first argued that we could slow climate change by saving forests, farms, and fields. Environmental NGOs began putting that to work in Latin America the late 1980s, and the NGO World Vision began using carbon finance to support its development efforts in Ethiopia over a decade ago.

In the district of Wolaita Sodo, for example, it helped farmers plant trees in among their crops, infusing nitrogen into the soil and recharging 12 depleted springs while putting 2,000 people to work. It financed the effort by generating offsets for the greenhouse gasses those trees pulled from the atmosphere.

In 2004, the World Bank created the Biocarbon Fund to test financing mechanisms for restoring forests under the Kyoto Protocol, and in 2008 they set up the FCPF to test methods of saving forests under “REDD-plus”, which stands for “reducing emissions from deforestation and degradation of forests, plus sustainable land use”.

Isolated projects have proliferated around the world, and nearly $3 billion has flowed into them worldwide, according to Ecosystem Marketplace’s latest State of Forest Carbon Finance report, which came out in December. In 2016 alone, projects added an area the size of Nicaragua.

To really fix the climate mess, however, we have to move from isolate projects to integrated programs that cover entire states or even countries, and that’s where Oromia comes in.

From Projects to Programs

Almost from its inception, the FCPF began working with the Ethiopian government to develop a framework for monitoring greenhouse gasses flowing into and out of land systems, but it soon became clear that some states within countries are more compatible with REDD-plus than others; so, in 2013, the BioCarbon Fund set up the Initiative for Sustainable Forest Landscapes, or ISFL, to test a whole variety of financing mechanisms that can support sustainable agriculture in developing countries.

Unlike the FCPF, which focused on national carbon accounting and small, localized pilot projects, the ISFL aimed to help entire jurisdictions reduce their emissions, and one of the first jurisdictions identified was the Ethiopian state of Oromia.

The national government worked with the ISFL to create something called the Oromia Forested Landscape Program, which is a 10-year program broadly divided into two activities: a cluster of “mobilization grants” totaling $18 million to support community programs, and “results-based finance”, or payments for emission reductions of up to 10 million tons of carbon dioxide.

“They selected Oromia because it holds 51% of Ethiopia’s forest,” says Kaechele, who is the point person for both the FCPF and the ISFL in Ethiopia and Mozambique. “It’s also very important because of water security – not only for Ethiopia but for the whole horn of Africa.”

Kaechele stresses that carbon finance isn’t a panacea, but it is instead a way to both prime the pump for further action and measure success.

She cites the ISFL’s interaction with Swiss coffee giant Nestlé Nespresso as an example.

The company  markets “grand cru” coffees, which it claims have a distinctive taste and aroma. It gives full credit for that taste and aroma to the farmers it works with, and in 2003 it teamed up with the environmental NGO Rainforest Alliance to create the AAA Sustainable Quality Program, which enlisted another group called TechoServe to help farmers across Ethiopia, Kenya, and South Sudan increase productivity more than 50 percent.

Based on that success, ISFL donors are covering half the $6 million cost of helping 20,000 smallholder coffee farmers implement those same practices through the International Financing Corporation (IFC), which is the private-sector arm of the World Bank.

More than 17,000 farmers have been trained in sustainable farming, and the Nespresso project has registered 32 mills to process coffee beans, while the ISFL is looking to add four more jurisdictions to the program.

Ultimately, however, to meet the Paris Agreement target of keeping temperatures within 1.5°C of pre-industrial levels, such efforts must be scaled up dramatically and coupled with steep reductions in industrial emissions.