Mexico aims to slow climate change by saving its forests – an approach that’s traditionally meant good work for external companies who know how to measure the carbon content of trees. But Felicia Line of EcoLogic says locals can handle the job even better. 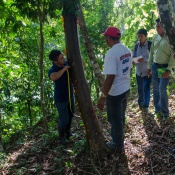 8 September 2015 | Calakmul | Campeche | MEXICO | Sara Camacho and her two-man team had been leading their brigades, made up of local community members, into the forest for weeks, leaving at dawn and returning at dusk, mosquito-bitten, snake-bitten and – in the case of team member Yoni Sima – feverish on the night I met them, but full of bonhomie.

“I’m starting to feel like I’m married to you guys,” joked Camacho, a fireplug of a woman in her mid-20s who Sima and their third colleague, the burly Manuel Arana, address with affection as la jefa – “the boss lady”.

The three young mestizos had come to the old Mayan district of Calakmul to help marginalized communities learn how to measure the carbon stored in their forest – a task that requires identifying the forest’s trees by species, measuring their circumference, estimating their height, and then applying formulas to determine their biomass, half of which is carbon. If they get the species wrong, the carbon inventory will be off even if the measurements are right. And the same thing will happen if they get the species right but are sloppy about their measurements. Such errors could accumulate to add more uncertainty to the already difficult science of measuring carbon in forests, which is critical in efforts to slow climate change and earn international funding for REDD+, which stands for Reducing Emissions from Deforestation and Degradation.

Because of the high stakes, governments like Mexico’s have traditionally hired expensive companies to do the whole country’s forest and soils inventory; but those countries often lack specific local knowledge, and this has resulted in at least a few inventories listing species that aren’t found anywhere in the country of Mexico, let alone in the state of Campeche, according to Eduardo Martinez and Ligia Esparza.

“We don’t need to hire external people,” he says. “People who live in the forests can do the monitoring themselves.”

For Camacho, there was even more to prove.

“Machismo is a big challenge, as women traditionally have only worked at home,” she says. “Now that we teach others, this is proof to other women that everyone is capable of doing fieldwork.”

She’s part of a “train the trainers” initiative that Martinez and Esparza spearheaded with funding from Governor’s Climate and Forest Fund, coordinated by EcoLogic Development Fund.  I was put in charge of coordinating state efforts between Chiapas and Campeche, working together with state governments, local scientists, communities, the National Forestry Commission, FAO and UNDP in order to work out ways to measure forests at the state level – an intermediary level between the national and local level.

Camacho and Sima came here by way of university, where they earned formal forestry engineering degrees and then applied it in the field. Arana, however, picked up his knowledge of the forest while working as a technician making forest fire defenses, and then later with forestry scientists. Now all three are sharing that knowledge with marginalized communities in the rainforest – delivering in the process opportunities of temporary employment, and helping to raise awareness about forest conservation among community brigades in Calakmul, which is the largest area of conserved rainforest left in Mexico.

That puts them on the front lines of Mexico’s efforts to slow climate change, because a large part of those efforts are built on saving the country’s forests.  It is estimated that roughly half of all the country’s tropical rainforest and 20% of its pine forest is in areas occupied by 52 indigenous peoples, many of whom depend on them for their well-being, according to the country’s draft National REDD+ Strategy.

Jobs for Women and Youths

Calakmul covers almost 4 million hectares of semi-evergreen rainforest, and the region boasts models of sustainable  community forest management that have certified and exported wood, charcoal, cocoa, honey and even chewing gum  to other parts of Mexico and abroad.

The region is known for its Mayan heritage, but people here come from all across Mexico, and many were displaced during the Zapatista Revolution. I had a chance to speak with several community members with indigenous descent from Chiapas, and they told stories of how their parents or grandparents moved to Campeche in search of new land.  People from this region are very hard-working and highly value their forest – many of them mentioned how they have seen in Chiapas what deforestation and degradation does to their livelihoods and why the environmental services the forests give are so important.

“The role of involving young people from the communities in the monitoring of the forests is crucial,” says Esparza. “They have lived through the conflicts in their communities, so they can contribute to clear up misunderstandings and inform their community in a precise way about the natural resources they have.  They can also present information in a common language that can be useful for their community and not just present a graph or leave a thesis.”

For Camacho, there’s the added incentive to provide jobs for women, even though many husbands don’t grant their wives permission to work. Still, there is one woman in their class of roughly a dozen technician trainees. Her name is Horencia Rivera Mexicano, a single mother who has enjoyed the fieldwork so much that she has decided to apply for a scholarship to study a forestry degree.

Deeper Understanding of the Forest

Sima says that he learned more about the forest in the field than he did at university, where he earned a postgraduate degree in forest engineering. But he also knows that outside knowledge has its place, and he believes that  technicians and community members can work well together with a mutually beneficial relationship. Technicians, for example, can gain access to areas that they wouldn’t normally have permission to enter, and they can generate a source of training and temporary employment for people in communities.

As proof, he points to Arana’s sense of the terrain. Although not as formally educated as the other two, he can identify roughly 90% of the species in Calakmul by sight and can estimate tree heights almost as accurately as a clinometer.

And there is plenty of work to do. Mexico boasts one of the best National Forest and Soils Inventories in the world, with measurements from more than 1 billion trees from 81,665 sites all over Mexico. It’s also a main source of information for determining the amount of carbon that is stored in the country’s forests, and it was used alongside other information sources to calculate Mexico’s National Emissions Reference Scenario to report to the United Nations Framework Convention on Climate Change.

However, this information will have to be improved and filtered with the help of communities and local scientists that have access to more local information that will help compliment national databases.

Next Week: Communities in Jurisdictional REDD

In the second installment, we examine the role that forest communities can play in developing Mexico’s jurisdictional REDD strategy.

Mexico Aims For Inclusivity With New Carbon Norm, But Does It Bring Rigor?