Cocoa is Ghana’s largest cash crop, but it faces an uncertain future as farmers burn through land and devour forests. The government hopes to fix that by using REDD+ finance to promote sustainable agriculture, provide insurance, and help those who embrace sustainable farming to sell their products. 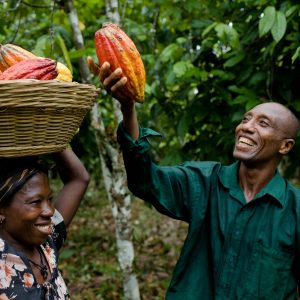 13 June 2016 | In Ghana, cocoa is king: it accounts for almost 10 percent of the country’s economy and 30 percent of its exports – but it’s also a leading driver of deforestation, for a variety of reasons.

To begin with, the cacao tree on which the cocoa bean grows is a ravenous beast that sucks nutrients out of the soil at rates that require massive infusions of chemical fertilizer. On top of that, cacao grows best in filtered sunlight, under shade trees; but more and more farmers have been chopping the shade trees to increase yields in the short-term – largely because of widely-held beliefs that new hybrids thrive in the sun.

The result, says Yaw Kwakye, Head of the National REDD+ Secretariat within Ghana’s Climate Change Unit, is a perfect storm of practices that could drive up greenhouse-gas emissions from deforestation and forest degradation while hastening the end of the country’s cocoa industry.

“The economic lifespan for cocoa is up to 35 years,” he says. “But if you clear all the shade trees and cultivate cocoa under the full blast of sunlight, you’ll only have your cocoa standing for 10 years – and after that, you cannot get any yields.”

As a result, farmers are moving deeper and deeper into the country’s forests – with devastating results.

To combat that, the country is using international carbon payments under the United Nations Framework Convention on Climate Change (UNFCC) to finance a massive education campaign, coupled with insurance programs and efforts to get the big chocolate companies working more closely with small farmers.

Five years ago, the country began looking for ways to promote forest carbon projects that promote the use of shade trees and reduce emissions from deforestation and degradation (REDD), but those efforts ran aground because of Ghana’s unique tree tenure system.

According to the constitution, all naturally occurring trees belong to the government – an arrangement that fails to provide the incentives needed for the farmers to grow and take care of cacao shade trees. According to Rebecca Asare, West Africa Coordinator for Forest Trends and program director for NCRC, it was impossible to implement individual cocoa carbon projects.

“The tree tenure system, lack of a clear REDD methodology and inadequate investment in Cocoa Carbon meant that it could not succeed,” she says.

The challenges presented by project-based REDD+ presented Ghana with an opportunity to implement jurisdictional REDD+. In Jurisdictional REDD+, an entire country – or a state within a country, or even, as in the case of Ghana, an ecological region – receives funding to reduce emissions from deforestation and degradation. Individual projects like Mai Ndombe can then “nest” within these efforts, provided the emission-reductions aren’t double counted.

In 2011, the government created the Climate-Smart Cocoa Working Group, with the support from the Rockefeller Foundation, the Ghanaian NGO NCRC (Nature Conservation Research Centre), and Forest Trends. Although the working group’s main idea was to promote project REDD+ by exploring potential for the cocoa sector’s carbon finance potential, this has since shifted to jurisdictional REDD+.

According to Asare, CSCWG drafted a vision document that became Ghana’s Emission-Reduction Program Idea Note (ER-PIN), which was formally submitted to the carbon fund of the Forest Carbon Partnership Facility (FCPF) of the World Bank in April, 2014. And ER-PIN is a document that clarifies the project in terms of objectives, financing sources, roles of partners among others. This document – Ghana’s emission-reductions program for the cocoa forest mosaic landscape – was accepted by the carbon fund, and Ghana is now working on development of the Emission Reduction Program Document (ER-PD). This is the first commodity-based REDD program in Africa, and possibly in the world. If successful, the Carbon Fund, which is hosted by the FCPF, would agree to performance-based for a proportion of the emission-reductions generated by the program, up to roughly $50 million.

The FCPF has already provided US$3.4 million for the implementation of a 4-year REDD-Readiness Preparation Proposal (R-PP), and is outlined in this finance flow analysis by Ecosystem Marketplace publisher Forest Trends. But it’s expected that the bulk of the finance to support implementation of the program will come from the private sector.

A jurisdictional approach can fly where projects floundered because it leapfrogs the sticky issue of tree tenure and individual farms, focusing instead on efforts to create an atmosphere in which the government can cultivate sustainable cocoa practices. To earn performance-based REDD+ finance through government-to-government programs under the UNFCCC, the government must simply show that national deforestation rates are improving, in accordance with rules to be formally agreed on at year-end talks in Paris.

Ghana’s REDD Secretariat, in partnership with the country’s cocoa board, has designed a 20-year program that specifically targets the country’s cocoa sector. By the end of the 20 years, the program aims to cover 5.9 million hectares, avoiding the release of at lease 255 million metric tons of carbon dioxide.

The strategy has several components: some targeted directly to the country’s 800,000 small farmers, others targeted to the roughly 25 major buyers.

Small farmers tend to be in it for the long haul, which makes them inherently receptive to the sustainability argument, says Kwakye.

“The farmers are more interested in the long-term cocoa cultivation, so that they can pass [their farm] on to the next generation,” he says. “If they want to do short term business, they’ll go into trading, for instance, or some other quick-return investment.’’

They do, however, lack knowledge and means – and that’s where REDD+ finance can help.

“Sometimes, they have been badly misinformed – such as with this myth of the ‘Sun Cocoa’,” says Kwakye, referring to a myth that is, frustratingly, driving deforestation in some parts of the country: namely, the mistaken belief that new cacao hybrids can thrive in direct sunlight.

“Of course, cocoa needs light, obviously, for the process of photosynthesis,” says Kwakye. “But then also the shade creates a kind of micro-environment that is conducive and supportive of cocoa productivity.”

Even areas that haven’t succumbed to the myth of sun carbon, there is little understanding of modern farming methods.

“They often don’t understand the proper way to apply fertilizer and pesticides,” Kwakye says. “Often, even if they know which fertilizers to apply, they can’t afford them.”

As a result, only 30% of cocoa famers use chemical fertilizer, and only half use insecticides – and then often in quantities that are too small.

Using REDD finance, the REDD+ Secretariat will recruit and deploy agronomical experts, who will educate and advise farmers on the best practices for sustainable cocoa cultivation – such as which pesticides to use, and the most suitable seedlings for both cacao trees and shade trees.

The government will also provide insurance to protect against losses incurred from fluctuations in climate, and then it will work with banks and buyers to make sure that finance is more readily available to small farmers.

Forging Alliances Between Buyers and Farmers

Sustainable farming often means lower yields on an annual basis, although that’s not always the case – as farmers in Kenya’s Lake Naivasha Watershed learned recently. Still, when sustainability does raise short-term costs, farmers who shift practices often find it difficult to get a premium price for their goods.

That’s because buyers and middlemen aren’t as tethered to the land as farmers are, so their inclination to long-term thinking isn’t as strong – but it does exist, especially as consumer giants Cadbury, Nestlé, and Kraft come to terms with the looming long-term cocoa shortage and consumers themselves become more aware of the moral implications of their purchases.

John Mason, executive director of NCRC, says there’s plenty of precedent for that, and points to a non-profit called Source Trust, which certifies and promotes sustainable cocoa-farming practices in local communities. It was set up by Armajaro Trading Ltd, one of the country’s major intermediaries between farmers and chocolate manufacturers, who pay Armajaro a premium of US$30 per ton in exchange for a traceable and sustainable cocoa supply.

“As an industry, our interest is to ensure that farmers have good yields over the long term, not just in the next couple of years,” said Nicko Debenham, head of traceability and sustainability at Armajaro and a spokesperson for Source Trust, in a 2011 interview with Ecosystem Marketplace.

Such efforts show promise, but they need to be scaled up to have a meaningful impact on deforestation. Ghana plans to use this financing model to attract both domestic and international donors to its REDD+ initiatives. The international programs will include bilateral agreements with Ghana’s development partners and may tap other financing options, such as The Green Climate Fund.

The tree tenure issue remains tricky, and can only change if the law changes.

“I suspect that will happen, but it’s up to the legislature, and not to us,” says Kwakye.

Once the laws change, he says it will be possible to “nest” individual REDD+ projects within the national system – but that will also require a better understanding of the impact that sustainable practices have on the carbon content of forests.

“At this point, we really don’t have the data, which is another reason projects never took off,” he says. “We’ve learned a lot in the last five years, and we’ll know a lot more by 2020.”

Tabitha Muriuki is a free-lance reporter and researcher who divides her time between the Netherlands and her native Kenya. She focuses on sustainable land use, and is working towards a PhD on the dynamics of international negotiations. She can be reached at tabitha@muriuki.nl.