Forests hold 40 percent more carbon than all the known fossil fuel deposits worldwide — nearly five times more carbon than can be added to the atmosphere without exceeding the Paris Agreement’s 2°C goal, according to a new paper. 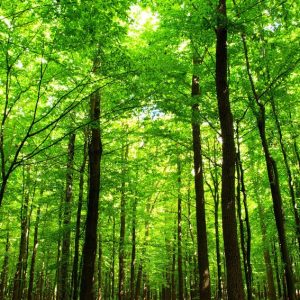 3 November 2017 | Forests can play a larger and more important role in reducing climate change emissions than previously thought, according to a suite of research released today. By stopping deforestation and allowing young secondary forests to grow back, the cumulative “forest sink” could grow by over 100 billion metric tons of carbon by 2100, about ten times the current rate of annual global fossil fuel emissions, according to a summary of the latest scientific research on forests and climate change, which was prepared by Woods Hole Research Center.

Capturing more carbon in land and forests is not a substitute for eliminating the world’s dependence on fossil fuels but by better managing forests and other land to reduce emissions and enhance their carbon sink capacity, forests and agriculture could help get the world at least a quarter of the way to meting the Paris Agreement’s goal of limiting warming to 1.5 oC, according to the summary.

The suite of research also included a report by Forest Climate Analytics, Large-Scale Forestation for Climate Mitigation: Lessons from South Korea, China, and India and a working paper co-authored by Martin Herold, Professor of Geoinformation Science and Remote Sensing, Wageningen University, The Netherlands, Forest Mitigation: A Permanent Contribution to the Paris Agreement.

The analysis of large-scale forestation for climate mitigation shows how efforts to restore and expand forests in China, India, and South Korea have already provided significant carbon removal benefits to the climate. Through large-scale tree planting efforts, these three countries removed more than 12 billion metric tons of carbon dioxide from the atmosphere over the past two decades. The analysis illustrates how countries can protect, expand, and improve the management of forested lands, keeping carbon out of the atmosphere and helping draw down excess CO2 from fossil fuel emissions.

The permanence paper argues against the notion that forest mitigation is somehow less valuable than the reduction of fossil fuel use. It emphasizes that forests have been sequestering carbon for millennia. There is 40 percent more carbon stored in forested lands than in known fossil fuel deposits worldwide—this is almost five times more carbon than can be added to the atmosphere without exceeding the 2°C goal, according to the paper.

“Releasing this carbon into the atmosphere through continuing deforestation not only commits us to the worst impacts of climate change, but also results in the loss of a globally important carbon sink,” said Martin Herold, Professor of Geoinformation Science and Remote Sensing at Wageningen University, The Netherlands and one of the authors of the permanence paper.  “People often misunderstand the longevity of forests—sure, individual trees die, but forests naturally grow back. As long as the land use does not change, forests are a permanent fixture of the earth’s carbon sequestering architecture. Protecting the carbon stored in forests is no different than taking action to ensure fossil deposits stay underground.”

These findings should help inform how the upcoming Conference of Parties to the United Nations Framework Convention on Climate Change in Bonn defines the rules for greenhouse gas accounting. For example, some countries’ ‘targets’ under the Paris Agreement allow them to degrade the forest sink without penalty when the research shows that forests need to expand if the ambition of the Paris Agreement is to be achieved. The Bonn meeting will discuss the implementation guidelines for the 2015 Paris Agreement, which established the goal of limiting global warming to “well below 2 °C.”

“We cannot meet the Paris Agreement’s goal of limiting warming to 1.5 °C without utilizing the potential of forests and agricultural soils to store more carbon,” said Philip Duffy, president and executive director of Woods Hole Research Center. “This requires avoiding future emissions as well as using these resources to remove CO2 from the atmosphere. The relatively small net CO2 emissions from land use—about 10 percent of total human emissions—is the difference between much larger emissions and removals. This masks the great potential of forests and soils to contribute to climate mitigation.”

According to the Woods Hole brief, Forests and Land Use: Undervalued Assets for Global Climate Stabilization, while a rapid decarbonization of the global economy remains essential, aggressive action to reduce emissions from the land sector can buy additional time for this transition. Ending tropical forest loss, improving tropical forest management, and restoring 500 million hectares of tropical forests could reduce emissions sufficiently to provide 10-15 years of additional time to dramatically reduce use of fossil fuels, according to the brief. The potential is even larger if the role of the entire land use sector is considered.

Forests also play a role beyond carbon capture. “We have seen that deforestation directly alters local and regional rainfall and temperature, threatening hunger and malnutrition for those who can least afford it, and compounding the threat that climate change already poses,” said Deborah Lawrence, professor of Environmental Sciences at the University of Virginia. “Forests play so many important ecological roles, including protecting drinking water supplies, cooling the Earth’s surface, and regulating rainfall patterns.”

The three afforestation, reforestation, and forest restoration (A/R/R) case studies explored in the research show the benefits when governments invest heavily in forests. South Korea spent more than one percent of its national budget (about US$200 million per year) during the peak of its program. China and India have both invested more than US$10 billion per year recently. Cost per hectare was as low as US$30-74 early on in India, up to US$2,151-2,317 recently in China. Rough estimates of cost per ton of CO2 sequestration range from a low of about US$2 in India to US$26 per ton in China.

“The experience of China—which produces more carbon emissions than any other country—is especially noteworthy, as reforestation programs there not only removed CO2 from the atmosphere and increased forest cover by more than 50 per cent, but also provided additional income to rural communities and ensured that forests provide critical ecosystem services that support agricultural productivity,” said Michael Wolosin, president at Forest Climate Analytics.

“As countries work to make good on their commitments under the global climate agreement, we need to look at where we’ve already had success in reducing carbon in the atmosphere by protecting and growing forests” said Wolosin. “China’s example shows that we don’t need to wait for a future technological fix for carbon removal. Forests are a natural carbon removal technology—and one that is proven and available immediately to be deployed at a large scale. Without significant leadership from policy makers, this moment of opportunity to realize the full mitigation potential of forests and lands could be lost.”

Currently, there is a major gap in funding for forests. Total forest finance is dwarfed by enormous dollars that are essentially paving the way to their destruction. Investments in stopping deforestation comprise less than 1.5 percent—only US$2.3 billion—of the US$167 billion committed by multilateral institutions and developed country donors since 2010 to climate change mitigation, according to the report, Finance for Forests, the New York Declaration on Forests Goals 8 and 9 Assessment report. Agriculture is the largest driver of deforestation, but since 2010, finance for business-as-usual agricultural practices has been nearly 40 times larger than finance for forest protection.

Maximizing mitigation from forests and agriculture requires focusing on a shortlist of priorities, according to a Climate Focus report, How Land Use Can Contribute to the 1.5°C Goal of the Paris Agreement, including protecting and restoring forests, improving agricultural practices, and shifting to healthier diets that do not exceed medical recommendations for red meat consumption.

According to research, supported most recently by research being released this week in Berlin, the average annual deforestation rates in forests over which Indigenous Peoples have secure tenure have been found to be significantly lower than in forests that lack secure tenure.

A 2016 report from the Rights and Resources Initiative (RRI), Woods Hole Research Center (WHRC) and the Word Resources Institute reported that Indigenous Peoples and local communities hold at least 54,546 million metric tons of carbon in the tropical forests they live in globally, or just under one-quarter of the total carbon found aboveground in the global tropics.

“Evidence provided by satellite imagery, corroborated by measurements taken on the ground, clearly shows that forest loss is markedly less in areas controlled by indigenous peoples,“ Duffy said. “Yet climate funds have so far failed to prioritize the ability of indigenous and local communities to prevent deforestation.”

2 thoughts on “How Saving Forests Can Meet Climate Challenge”