The Fairtrade Climate Standard officially launched at the Paris climate talks, with two of seven pilot projects represented and a handful of private sector buyers in the room. What sets it apart are a few unique requirements: set minimum prices, established per-tonne payments to producers, and an obligation for Fairtrade offset buyers to reduce their own emissions. 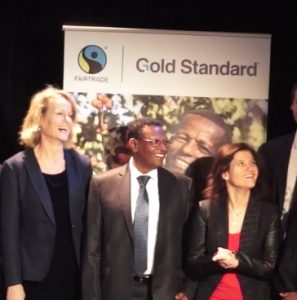 18 December 2015 | Carbon offsets are now keeping unusual company, appearing alongside acai, bananas, coffee, cocoa, cotton, quinoa, rice, sugar, and other commodities on a list of Fairtrade products. The listing comes after a three-year effort by Gold Standard, Fairtrade, and other partners to develop the Fairtrade Climate Standard, which officially launched on December 4 during the United Nations climate negotiations in Paris.

The most head-turning aspect of the standard is its established minimum price for carbon offsets, set for now at 13 Euros (US $14.1) for tree-planting projects, 8.2 Euros (US $8.9) for energy efficiency projects, and 8.1 Euros (US $8.9) for renewable energy projects. On top of that, buyers must pay a Fairtrade “premium”, an extra sum that goes directly into the pockets of producers, set at 1.5 Euros for tree-planting offsets and 1 Euro for both energy-related ones.

Carlos Canales, who has been managing the development of the standard, says that the minimum prices serves as a “safety net” for the smallholders Fairtrade targets: “This is the bare minimum that you’re going to get as a payment for the carbon credits that are produced through your project.”

The prices were developed through a model that took into account the real-life costs of producing a carbon offset, similar to the way Fairtrade minimum prices are calculated for any other commodity. The Fairtrade premium is also a standard feature for all Fairtrade products, and producers usually decide democratically on a development plan that determines how they spend it. For Fairtrade carbon offsets, there is one additional stipulation: the money must be reinvested in climate adaptation activities.

“This will be more empowering to the communities out there who are the producers,” said Itumeleng Kosie of Solar Lights, a clean cookstoves distributor in Lesotho that is piloting the Fairtrade Climate Standard. “This will actually give them momentum, a boost in realizing they are not alone in the mitigation of climate change.”

The Fairtrade Climate Standard is only available for use with Gold Standard offsets.

Fairtrade and Gold Standard made a video about the launch of the standard, which you can watch here:

The groups involved in developing the standard hope that it will address some of the problems they see on the voluntary carbon market, including chronic under-pricing, a lack of transparency on the part of offset buyers, and money skipping over the producers themselves.

“The voluntary carbon market is in crisis, with slumping prices, project developers struggling to cover their costs, and a lack of transparency in pricing,” wrote Andreas Kratz, Director of Standard and Pricing at Fairtrade International, in a recent blog post. “It’s a little like the coffee market of 30 years ago, when Fairtrade was born as a response.”

“Our challenge since we started six years ago has always been the pricing, and that’s gotten worse every year,” Maarten Dersken, Fund Manager for the FairClimateFund, told Ecosystem Marketplace in September. The FairClimateFund is piloting the standard in their clean cookstoves project in Ethiopia.

Voluntary buyers purchased nine million offsets from Gold Standard projects, giving the standard 15% market share in 2014. While Gold Standard offsets have in the past been priced above the voluntary average, it wasn’t the case last year. Inexpensive wind offsets pulled the average Gold Standard price down to $4.4/tonne in 2014 compared to $8.5/tonne the previous year. The current Fairtrade minimums are therefore 1.8 to 2.9 times current Gold Standard prices – and that’s not including the Fairtrade premium.

Onus on the buyers

Another hallmark of the Fairtrade Climate Standard is its specific requirements for buyers to have a third-party verified carbon footprint and an emissions reductions plan in place. Buyers are also required to clearly communicate about the portion of their offset portfolio that is certified Fairtrade, and to increase that amount over time “when supply is available,” according to the standard.

The idea behind the buyer requirements is to ensure that emissions reductions occur not just on the supply side of the carbon offset markets, but also on the demand side. But it is not clear whether this will be a significant departure from what is already occurring.

Most buyers are using offsetting as it was intended – as a last resort, after other efforts to slash their footprint have been exhausted. A recent Ecosystem Marketplace report that examined CDP carbon disclosures found that companies that offset invest more in renewable energy, green product design, and other initiatives compared to companies that don’t offset. On average, ‘offsetters’ reduced direct emissions 17%, compared to non-offsetters’ average reduction of 5%.

Retailer Marks & Spencer, which was the fifth-largest voluntary buyer of carbon offsets as of 2014, according to corporate CDP disclosures, has committed to carbon neutrality and purchases offsets for the emissions it cannot reduce internally. Carmel McQuaid, the company’s Head of Sustainable Business, said the Fairtrade Climate Standard’s rules for offset buyers won’t be hard for them to meet.

“We were taking that approach anyway, to be honest,” she said. “We weren’t just buying carbon credits and not worrying about what we were doing.”

“You get what you pay for, and in that sense it’s very important to have partners that are able to ensure quality across the world, because with DHL we are present in 200 countries and territories,” she said.

In addition to working towards reducing emissions 30% under 2007 levels by 2020, DHL’s GoGreen program offers its customers the option to send packages through the mail carbon neutral. More than two billion shipments have been neutralized so far, Wilbaut said. The company provided the finance for the Lesotho project.

For corporates that have not yet included offsetting in their carbon management strategy, though, an additional standard in an already difficult-to-navigate market could be a hurdle.

“When you look at it in aggregate, you see there are some great companies doing great work, and it is increasing, but there needs to be a lot more,” Zubair Zakir, Global Carbon Director at Natural Capital Partners (formerly The Carbon Neutral Company), told Ecosystem Marketplace in September. “I think what we do need for those masses is a balance of making it simple. The NGO ‘stick’ is always there for companies.”

Imposed price floors can also create a catch-22. On the one hand, minimum prices may truly represent the cash flow that carbon projects need to stay operational and provide benefits to producers. On the other hand, if offset suppliers aren’t able to find buyers at the minimum price points and they are unable to lower them according to market conditions, there may be no cash flow at all – and that doesn’t help producers, either.

Only time will tell whether the Fairtrade Climate Standard will attract the scale of private sector interest that its creators anticipate, but the anecdotal interest is positive so far. In addition to DHL and Marks & Spencer, Dutch energy company Eneco, German honey producer Breitsamer, and Belgian coffee roasters Beyers and the Java Coffee Company are among the early adopters that plan to buy Fairtrade-certified carbon offsets.

Correction: On request of Fairtrade and Gold Standard, this article was amended to exclude the statement that Fairtrade is not ruling out the possibility of working with other standards in the future, as there is an exclusive contract in place.