The murder of four indigenous leaders in September thrust deforestation into the limelight ahead of year-end climate talks, which are set to begin in less than two weeks in Lima. The daughter of one of those leaders the 57th “Defender of the Environment murdered in Peru since 2002 was honored yesterday with the Alexander Soros Award for Extraordinary Achievement in Environmental and Human Rights Activism. 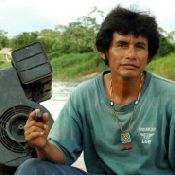 18 November 2014 | Diana Rios Rengifo looked determined as she stood in New York City in front of more than 100 environmental and human rights activists, her face painted red in the custom of her people, the Ash¡ninka of the Amazon.

“They may have killed my father and his friends, but I am still here,” she said. “I will continue to fight for the rights to our territories and for the rights of the other indigenous peoples of Peru.”

It’s a fight that cost the life of her father, indigenous leader Edwin Chota,who was murdered by loggers in early September, along with his colleagues, Leoncio Quincima Melendez, Jorge Rios Perez, and Francisco Pineda. They were murdered because they defended the forest, and they’re not alone.

Advocacy group Global Witness says at least 53 other people like Chota, making a total of 57 “defenders of the environment,” have been killed in Peru since 2002 in disputes over mining, logging, and land rights. This violent trend shows that people are dying–at an alarming rate–because our global economy values dead wood more than it values living forests.

With global climate talks set to begin in Peru on December 1, Rengifo called on Peruvian President Ollanta Humala to “treat our forests with the importance they deserve” as she accepted an award from the Alexander Soros Foundation in her father’s honor on Monday.

Peru’s Amazon rainforest is home to more than 300,000 indigenous people, and indigenous land rights have proven to be a highly valuable tool to curb deforestation. But indigenous communities, like Chota’s Ash¡ninka, are denied the necessary protection and support from their governments against those who would clear-cut the forest–with sometimes fatal results.

The annual Award for Extraordinary Achievement in Environmental and Human Rights Activism included with it a pledge to fund projects in the victims’ villages, and to support their families. For Rengifo, making the long and emotional journey to New York to accept the award was the first time out of her native Peru.

The Need to Protect Forests–and People

Her remarks point to an issue that Global Witness raises in a report, “Peru’s Deadly Environment,” released on Monday at the Soros event: the degree to which Peru is committed to protecting its forests and the people–like Chota and his family–who have called that forest home for decades. Set to host the 20th Conference of the Parties (COP) in just two weeks, Peru is the “fourth deadliest country to be an environmental or land defender,” claims the report.

The timing of the report’s release is not accidental. As all eyes turn to Peru as the host of the international climate talks, Global Witness hopes to put pressure on the country to close the gap between how it would like to be perceived–as a leader in the fight against climate change–and a dangerous reality. The report also makes the important connection between the climate crisis that the representatives from governments of 195 countries will discuss and the human rights crisis that is happening in Latin America and globally.

There has been encouraging news lately in terms of the world beginning to accept and understand the idea that forests are vital tools in our global flight against climate change. Yet, as the climate talks in Peru begin, such a premise must go hand in hand with the idea that indigenous people’s management of forests is vital to curbing carbon emissions.

Only when forests are fully recognized for the value they have as living, standing trees–the “lungs of the planet,” which literally suck carbon out of the atmosphere–and the international community embraces this concept and protects it wholeheartedly, will the kind of disputes over whether a forest should be clear-cut or not become non-existent.

As the deaths of Edwin Chota and the other leaders, honored this week for their brave work, illustrate all too tragically, our climate crisis is sadly tied to a human rights crisis–and if we hope to make any headway in climate, we need to focus on human rights as well.