Our ravenous appetite for beef and soy is killing the Amazon rainforest, but it doesn’t have to be this way. The Amazon, it turns out, produces hundreds of edible plants that can be harvested without chopping trees, and a growing culinary movement hopes to tap these trees to save the forest. Here are the innovative chefs who could help us save the Amazon by learning to eat it. 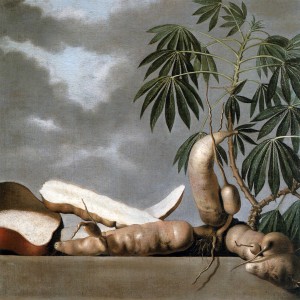 This story is cross-posted on Canopy Bridge, an Ecosystem Marketplace affiliate.

25 November 2015 | Rows of combines roll in formation across regimented soybean fields. In the Brazilian Amazon, thousands of square kilometers have been cleared for the production of soy and beef for export. This is one way of producing food from the rainforest.

But there are other ways. In Peru, an Awajun farmer tends her farm in the rainforest. There are over 200 species of edible plants recognized by her community. In Lima, Ámaz, Pedro Miguel Schiaffino’s chic restaurant, serves up an array of Amazonian ingredients, including aji negro, a rich sauce derived from a toxic variety of manioc, carefully purified and tamed by a Bora indigenous community in the Peruvian jungle.

Food will determine the fate of the Amazon forest. And the relationship between food and the rainforest is complicated and contradictory.

Felling of forests for agricultural production continues to be the single biggest driver of deforestation across the Amazon basin. Production of beef, soy and – to a lesser but growing extent – oil palm drive most deforestation in the Amazon, and is in turn driven by global demand for these commodities, ending up in everything from animal feed (3/4 of all soy production), to cookies, chocolate and lipstick (approximately 50% of products on supermarket shelves contain palm oil). 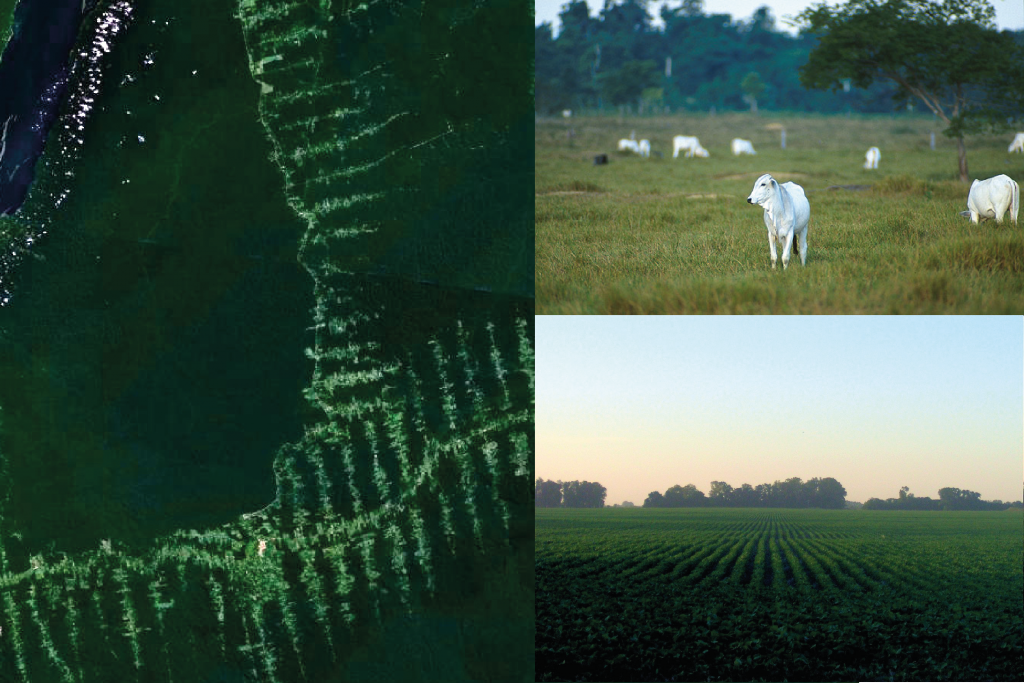 There’s a tragic paradox to converting one of the richest ecosystems on earth to biologically impoverished farming systems producing commodity calories. The classic analogy is that it’s like burning a library to stay warm, though a better comparison might be to tearing out those books’ pages to wrap fast food. It’s no longer primarily a question of subsistence and survival, but of large scale commercial production for global markets.

But we are seeing significant, but still fragile, glimmers of hope. Brazil has slashed deforestation rates 70% since 2005, through a combination of improved enforcement, creation of protected areas and changes in agricultural supply chains. Demographic shifts across most of the Amazon are slowing the pressures on the agricultural frontier. And major players in global commodities have made unprecedented commitments to eliminating deforestation from their supply chains. All of these are helping to slow, though not eliminate, the pressures from agriculture on forests.

The challenge now is to create options for those on the other side of the forest frontier, the communities and landowners who need to see value from their small farms, and from their forests, in order to keep them standing.

Food from the Amazon may be the key – but different foods, produced in a different way. There’s a striking contrast between large-scale enterprise-driven commodity production and the traditional food systems adapted over generations to the specific conditions of the Amazon, favoring diversity over homogenization, deep knowledge of the variety of plants, animals and fish of the forest.

In Latin America, as in the US and Europe, a new food movement is taking shape, with interest in healthy and novel ingredients, and a commitment to origins and supporting producers. A new crop of chefs and food enthusiasts is revitalizing national cultures and turning an enthusiastic and appreciative eye to local ingredients like never before. The boom in food culture has been nothing short of astounding with new restaurants, organic markets, and novel ingredients. Probably nowhere is this more evident than in the dramatic gastronomic boom that Peru has lead in the last decade.

Brazil, Bolivia, Ecuador, Peru, Colombia and Venezuela are very much Amazon nations, since the region comprises 40-60% of their national territories. But the Amazon has been largely invisible in national cuisine and restaurants. Chefs in some of the leading restaurants of Latin America are starting to change that, working with Amazon ingredients and directly sourcing them from communities and producers.

In addition to Schiaffino in Ámaz, outstanding chefs like Mitsuharu Tsumura (Maido) and Virgilio Martínez (Central) are incorporating ingredients from the Amazon into Peru’s celebrated cuisine. Across Latin America, the redefinition of local gastronomy through the use of Amazonian ingredients is slowly building a following. The leading exponents in Brazil include figures like Paulo Machado, Mara Salles (Tordesilhas), Alex Atala (D.O.M.) and Thiago Castanho (Remanso do Bosque), all of whom have received significant critical recognition. These chefs share a concern for the communities that produce the ingredients which they take into their kitchens. Perhaps there is no better example of the social dimension of this movement than Kamilla Seidler and Michelangelo Cestari´s Gustu in La Paz, both a culinary school and a restaurant with an absolute commitment to local sourcing. In their reinterpretation of local cuisine, Seidler and Cestari necessarily look towards the forest as part of their pantry. Other chefs like Eduardo Martínez (Mini Mal, in Bogota), Mario Castrellón (Maito, in Panama) and Fer Rivarola (El Baqueano, in Buenos Aires) are also upturning convention through their use of striking rainforest ingredients in their menus. Meanwhile, food writers like Ignacio Medina and Nicholas Gill have been covering the developments in great articles like this and this.

These chefs and restaurants are at the vanguard, educating their visitors dish by dish, making the Amazon’s biodiversity and extraordinary potential palpable. What’s needed now are ways to scale up that impact and make it work for rainforest communities. We need to do much more. Forests continue to fall at the rate of thousands of square kilometers per year. Traditional knowledge of forest products and traditional cultivars continues to erode. And one of the most tragic and ironic contradictions of food and the Amazon is the persistence of scarcity amidst its abundance. The Awajun recognize 223 plants and yet 1/3 suffer from chronic malnutrition, a pattern repeated across indigenous and forest-dependent people in the region.

We need to reimagine Amazon food systems in ways that address the need for real economic alternatives, value the cultural heritage and meet the needs of indigenous and local peoples, contribute to conserving standing forests and raise awareness of the true value of the Amazon, which lies in its diversity.

Gastronomy has an exciting future in the Amazon. There’s certainly an ample pantry to work with: in an environment with over 40,000 registered plant species and over 3,000 species of fish alone, there are literally thousands of ingredients yet to be discovered in this vast jungle cornucopia.

In a few days I’ll be embarking on a remarkable expedition in the Peruvian Amazon, with renowned Latin American chefs, social entrepreneurs, journalists, environmentalists and scientists from around the world to explore how we can leverage this budding commitment to sustainable gastronomy and a different sort of Amazonian food system into powerful opportunities for change.

Jacob Olander is Managing Partner of environmental services group EcoDecisión and co-founder of CanopyBridge, which is a global directory and network helping buyers and suppliers of sustainable crops and wild-harvested products to find each other and build relationships. He can be reached at [email protected]