The UN-REDD program recently launched a series of videos exploring REDD+ (reducing emissions from deforestation and forest degradation) in Panama, Ecuador and Paraguay. Below is a summary of the video on Paraguay and the struggles the indigenous people there face in attempting to protect their forest homes. 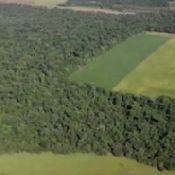 20 October 2014 | What’s happening to Paraguay’s forest is, unfortunately, a well-told story. The forests are under pressure from a multitude of threats that are undermining its health. A changing climate continues to alter rain patterns and affect food security. Drought plagues the farming and indigenous communities that rely on the forests for their livelihoods.

Meanwhile, poor local people living nearby are over-hunting and illegally logging. And the forest people receive little help from authorities in the way of law enforcement toward preventing these crimes.

Because of these threats, Paraguay’s 16 million hectares of forest are diminishing. This includes the Gran Chaco, the largest dry forest in South America. But as in several other countries struggling with similar challenges, REDD (reducing emissions from deforestation and forest degradation) could serve as a solution.

With REDD, sustainable forest management is fundamental. And in the video below, the UN-REDD programme demonstrates the advantages of REDD-one of them being its ability to empower indigenous communities. Many in this sector consider that a key component to successfully protecting the forests.

“We believe that if Paraguay really wants to start a process that protects the forests, it must work with those who live in the forests, says Mirta Pereira, a Legal Adviser for a local indigenous organization. “There has to be a relationship with the indigenous peoples.

She discusses the potential of REDD in Paraguay. “It’s clear to me that interacting with the state of Paraguay, of having a signed document at the highest level and of having the support of the UN is a great opportunity for us.

Specifically in Paraguay, the UN-REDD programme notes how it enables the forest inhabitants to plant trees on land unfit for agriculture while leaving open areas for grazing animals. In the agriculture fields, farmers plant a variety of plants like sunflowers, wheat and soy, which is better for the soil.

“The forest is not only carbon, not only trees, says Hipolito Acevei, the President of an indigenous organization. “It is an entire history-the place where we as humans and indigenous people co-exist.

Countering Illegal And Unsustainable Activities With REDD+ In Panama

REDD+ In Ecuador: A Forest Of Opportunities