Deforestation was supposed to be cut in half between 2014 and 2020, with 150 million hectares of land being restored. Instead, deforestation has surged 43 percent, according to a new report released on the eve of a global climate summit in New York. 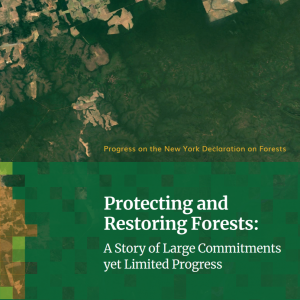 12 September 2019 | Individual companies may be cleaning up their acts, but overall deforestation rates have surged 43 percent in the past five years, despite the fact that hundreds of governments and companies endorsed the New York Declaration on Forests (NYDF) at the 2014 UN Climate Summit in New York.

The NYDF is a global pledge to cut the rate of natural forest loss by half and restore 150 million hectares of land by 2020, but a new report released in the lead-up to the 2019 United Nations Climate Summit shows that we continue to lose 26 million hectares of forest per year — an area the size of the United Kingdom.

“Since the NYDF was launched five years ago, deforestation has not only continued—it has actually accelerated,” said Charlotte Streck, co-founder and director of Climate Focus, a think tank that led a coalition of 25 organizations—the NYDF Assessment Partners—in authoring the report, Protecting and Restoring Forests: A Story of Large Commitments Yet Limited Progress.

“We must redouble efforts to stop forest loss, especially in primary tropical forests, and restore as many forests as possible before the irreversible impacts of losing trees further threaten our climate and food security,” she added.

Some countries, such as El Salvador, Ethiopia and Mexico, showed progress, especially in planting trees, but more than 80 percent of the pledge’s goals remain unmet.

“The report makes very clear that restoring natural forests can’t compensate for the loss of primary forests,” Streck said. “It can take decades to centuries for forests to recover their full carbon-absorbing and weather-regulating capabilities. We must restore forests in addition to protecting them. Progress in both is necessary—and, in fact, complementary.”

According to the report, the countries with the highest forest loss in the last five years include four Amazon Basin countries: Brazil, Bolivia, Colombia and Peru. In June 2019 alone, deforestation rates in the Brazilian Amazon increased 88% compared to the same month last year. There are also troubling new hotspots of increasing forest loss in West Africa and the Congo Basin—the Democratic Republic of Congo has more than doubled its deforestation in the last five years. In Asia, most forest is lost in Indonesia, Malaysia and Cambodia. However, the report shows there have been positive trends in the region.

Indonesia is the only bright spot on the deforestation map, the study showed. Political action combined with favorable weather over the last two years helped stop the widespread burning of peatlands and scale back forest destruction. While annual fires continue to threaten public health and the climate, President Joko Widodo’s permanent ban on the development of peatlands and primary forests is a good step forward.

Since the NYDF was endorsed, the largest driver of deforestation has been forest clearance for agriculture, including the industrial scale production of commodities like beef, soy and palm oil.  The inability of companies engaged in forest-risk commodities to meet commitments to remove deforestation from their supply chains contributes to the forest crisis. Also part of the problem is limited improvements in forest governance, including strengthening forest protection laws, enforcement in producer countries and adoption of demand-side regulation from consumer countries.

Exacerbating these business and government shortcomings is a major gap in funding for forests. The report finds that forest finance does not match forests’ potential to contribute to climate targets. Investments in stopping deforestation in tropical countries comprise less than 1.5%—only US$3.2 billion—of the US$256 billion committed by multilateral institutions and developed country donors since 2010 to climate change mitigation. It also emphasizes that a massive shift in the existing finance is needed; forest finance is currently dwarfed by enormous dollars that are essentially paving the way to their destruction due to a lack of safeguards and policies that take forests into account.

“There has been a failure to transform the underlying economic incentives that favor forest destruction over forest protection,” added Ingrid Schulte, coordinator of the assessment and one of the report authors. “Halting forest loss will take a serious systemic shift in behavior—from everyone—by reducing demand for commodities that carry embedded deforestation, reducing meat consumption, and investing in governance and protecting the rights of Indigenous Peoples.”

The Indigenous leaders who endorsed the NYDF argue that forest protection isn’t possible without strengthening their land rights, a claim backed by the latest Intergovernmental Panel on Climate Change (IPCC) report released last month. “The report makes clear that Indigenous Peoples and local communities are critical allies in the fight against deforestation and climate change. The scientists concluded that when our land rights are secure and enforced, our territories have consistently low rates of deforestation—often lower than in neighboring protected areas,” said Gregorio Mirabal, general coordinator of COICA (Coordination of Indigenous Organizations of the Amazon Basin). “We signed the NYDF and have kept our forests standing. Now governments and companies need to keep their end of the bargain.”

Restoration Slow to Ramp Up

Under the NYDF and the 2011 Bonn Challenge, countries pledged to restore a total of 150 million hectares of land by 2020 and restore at least an additional 200 million hectares by 2030, an approach increasingly viewed by scientists and policymakers as a proven, cost-effective and immediately available climate solution. But the report found that only a sliver of this restoration has taken place— 27 million hectares of forests (increase in additional tree and forest cover) over the last two decades. That’s roughly equivalent to the area of forest lost every year, and it represents 18% of the area countries committed to restoring by the end of next year.

“Not all forest restoration is created equal,” Streck said. “While some approaches, such as planting fruit trees on farmsteads, provide a buffer to the food system and help farmers boost resilience against climate impacts, there is really only one type of restoration that presents the best strategy at our disposal for solving the climate crisis: when it is combined with protection, the restoration of natural forests is most critical to helping us meet global climate goals.”