After a decade of lower and lower rates of deforestation, the Amazon forest is again under threat. Scientists say a new development project could become a contentions issue in 2018 as an expanded highway slices the forest in half. 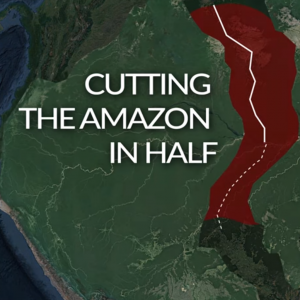 12 January 2018 | The BR-319 is a rutty, ragged road from the city of Manaus to the dusty backwater of Porto Velho – an 870 kilometer journey through the Brazilian Amazon.

The Brazilian government plans to upgrade it this year, turning the dusty stretch into a true highway that will bring wealth and prosperity to impoverished parts of the country.

Conservationists, however, say they’ve heard this before, and warn that the expanded road will cut the
Amazon in half, and accelerate deforestation across the region while redistributing wealth to rich landowners at the expense of indigenous people.

More than 90 percent of all Amazon deforestation takes place within 50 kilometers of highways or roads, and tropical ecologist William Laurance of James Cook University, has found that that roads damage protected areas as well, bringing fires and roadkill along the edges while reducing wildlife and biodiversity deep into the forest itself.

“Once completed, this road will link directly to the BR-174 Highway, which runs from Manaus to the northern border of Brazil,” he wrote in a recent blog post. “Together, the two paved highways will slice the Amazon in half along a north-south axis.”

Philip Fearnside, a scientist at the National Institute of Amazonian Research (INPA), told MongaBay that he expects the expansion to gradually become a hot-button issue in 2018, and Laurence produced this video to highlight the issue.

“In the past, paved highways in the Amazon have frequently opened a Pandora’s box of human impacts, including large-scale deforestation, fires, illegal logging, wildlife poaching, illicit gold mining, and land speculation,” says Laurence.