World leaders have opened the year-end climate talks with ambitious promises on finance as negotiators quietly work on negotiating text for Article 6, other initiatives. 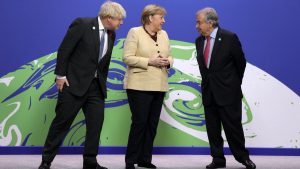 GLASGOW | 2 November 2021 | World leaders have set an ambitious agenda for the 26th Conference of the Parties (COP 26) to the United Nations Framework Convention on Climate Change (UNFCCC) here, with developing nations making both more promises and more demands and developed nations offering more finance than in years past.

What is the Future for Carbon Credits in the UN System?

At press time, the Subsidiary Body for Scientific and Technological Advice (SBSTA) has just released a new draft negotiating text for Article 6 of the Paris Agreement. Article 6 is the portion of the Paris Agreement focused on cooperative mechanisms, including cross-border carbon transactions. SBSTA is a negotiating track within the UNFCCC that focuses on technical issues. It is chaired by Tosi Mpanu Mpanu of the Democratic Republic of the Congo, who is charged with forging an agreement that can be passed up to ministers next week at the COP itself. Negotiating texts are rough drafts of the final agreement, with all areas of disagreement included, but in brackets. It is not uncommon to see long texts with multiple and contradictory statements in brackets in the early days before the areas are boiled down over the course of the week.

Here are links to the negotiating texts for three paragraphs of Article 6:

A clean draft is expected by Saturday.

Signals from On High: Anger and Offerings

If the high-level pledges are to be believed, there should be progress, as the pledges from developed countries are much higher than previously offered, while demands of vulnerable countries, both individually and through various negotiating blocks that have formed over the past 30 years, are more aggressive.

“Vulnerable countries, after compromising in Paris by not using the words ‘compensation,’ and ‘liability’ under the Paris Agreement, are really showing their frustration,” said Yamide Dagnet, director of climate negotiations for the World Resources Institute (WRI), referencing a joint announcement by Gaston Browne, The Prime Minister of Antigua and Barbuda, and Kausea Natano, the Prime Minister of Tuvalu regarding an accord to sue developed countries for damages n behalf of Small Island States. The agreement establishes a Commission of Small Island States on Climate Change and International Law.

On the pledge front, the United States is expected to announce a major financing package today, while several countries have announced dramatic increases to the Adaptation Fund. Spain, for example, announced a contribution of $30 million in 2022 with further increases through to 2025.

At the same time, more than 100 leaders, accounting for more than 86 percent of the world’s forests, committed to cooperating on halting and reversing forest loss and land degradation by 2030 – a commitment we will be examining in more detail over the course of the week.

More than 70 leaders also endorsed the Global Methane Pledge, committing to slash methane emissions by 30 percent within the decade – a significant move because methane captures more than 80-times as much heat as carbon dioxide does in the short term.

In addition to demanding more accountability from developed countries, developing countries are pledging to reduce their own emissions dramatically – pledges that could have an iterative effect of pressurizing developed countries to produce more finance. India, for example, commitment to achieving net-zero emissions by 2070, along with reaching 50 percent renewable energy by 2030. Although the target date is 20 years beyond the date the world should achieve net-zero, it is a significant – and detailed – pledge from a developing country.

“Net-zero only became a topic of public discourse six months ago, this is something very new for Indians,” said Ulka Kelkar, who heads WRI’s climate program in India. “Just having this concept understood in India is going to give a very strong signal to all sectors of industry and society.”

For a detailed (but often technical) summary of ongoing negotiations, we recommend the International Institute for Sustainable Development’s daily updates. Today’s update is available here.