When Latin Americans offset their greenhouse-gas emissions, they usually do so by purchasing offsets generated by saving or restoring forests. But the producers of Lollapalooza Chile and other major events are bucking the trend by partnering with a hydropower plant – albeit one that doesn’t create reservoirs and does support indigenous people. 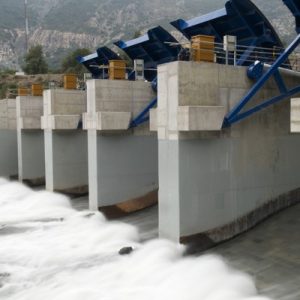 7 December 2017 | Metallica flew to Santiago in April, as did Duran Duran and 75 other bands – from hot up-and-comers to seasoned pros – for Lollapalooza Chile, a massive music festival that required the creation of seven outdoor arenas, the airlifting of thousands of humans, and the burning of enough fossil fuels to pump the equivalent of six thousand tons of carbon dioxide into the atmosphere.

The company that produces the event, Lotus Producciones, offset the emissions by purchasing six thousand carbon offsets, and it’s not alone, according to Ecosystem Marketplace’s recent analysis of carbon offset buyers, which found that producers of special events account for 6 percent of global offset volume – a staggering amount compared to the sector’s carbon footprint.

Since 2014, the company has offset emissions from all of its productions through a partnership with renewable energy operator and developer Pacific Hydro, which used carbon finance to develop its Chacayes Hydroelectric Power StationAl.

That makes Lotus something of an outlier in Latin America, where forest-based offsets account for 71 percent of all offsets purchased, according to the regional analysis supplement to State of the Voluntary Carbon Markets 2017.

At first glance, the choice of hydropower seems like an odd one – especially for a company operating in the image-conscious entertainment sector.

The analysis of offset buyers shows companies that deal directly with the public tend to prefer “charismatic carbon” projects that involve indigenous people and forests, and buyers in the entertainment sector put a premium on charisma, paying a higher price on average ($8 per metric ton) than buyers in other sectors.

Hydropower is almost the opposite of charismatic, because many people associate it with giant dams that flood indigenous territories and create massive bodies of standing water, which emit the greenhouse gas methane.

The Chacayes project, however, is a “run-of-river” project that creates only small, temporary reservoirs, and it generates “co-benefits” that are also coveted by buyers – specifically, it engages indigenous people in ways that give it more charisma than most.

For example, Pacific Hydro pays for English classes in the community of Coya, and it’s created a Scientific Fund which aims to enhance the knowledge of the local flora and fauna.

Lotus looked at forestry, but in the end decided that run-in-river hydropower was just as effective from an emissions-reduction perspective, and the costs were significantly lower. Project Manager Paloma Chicharro says Lotus also liked Pacific Hydro’s community approach, and that Pacific Hydro was eager to see its offsets associated with a high-profile event.

“Pacific Hydro emphasized the synergy with their own communities,” she says. “Plus, much of Pacific Hydro’s motivation for being in these types of events is to expand the carbon market in places that until now, at least in Chile, it has not arrived, which are these massive events.”

The two companies began collaborating, and the first step was to ​​identify those emissions that couldn’t be avoided. That meant auditing the activities of bands traveling to Chile, vendors selling products, and attendees. They decided to offset the emissions generated by bands and vendors, and eventually created a tool for attendees to calculate and offset their own emissions.

Lotus and Pacific Hydro decided to incorporate the event into the power company’s work with communities, allowing environmental and indigenous organizations like Desafío Levantemos Chile and Fundación Paternitas to sell handicrafts and other products in Aldea Verde (“Green Villages”) within the venue. All these initiatives are shared to both companies’ clients and partners through their respective websites.

Lottus also created an alliance with the Ministry of Environment in 2014, with which led to the  Programa Huella Chile (“Chile´s Footprint Program”) to calculate emission for all large events and providing a Sustainability Seal for those that reduce not only their carbon footprints, but their waste and noise. It’s expected to be implemented by the first quarter of 2018.

“The idea is to become a standard, which is no longer an added value, but an integral part of any production that is done” says Chicharro.