We routinely check the nutrition labels of products we buy, but carbon footprint labels seemed to disappear as quickly as they materialized a decade ago. Now Quorn, a maker of vegetarian meat substitutes, says it’s time to start again. 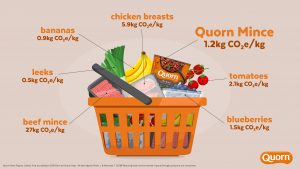 15 January 2020 | Twenty years ago, few people knew or cared what trans fats were – let alone how much of the artery-clogging gunk they were absorbing through their cookies, cakes, and chicken nuggets. By 2006, however, dozens of countries had mandated the labeling of trans-fat content, and consumer awareness soon drove the levels down dramatically.

Around the same time, more than a dozen private and governmental entities tried to do the same thing with greenhouse gasses by labeling products based on the amount emitted to bring various products to market. Major retailers like Tesco and household brands like Quaker Oats soon started labeling their products, while governments from the UK to China considered mandating the practice.

But mandatory labeling never materialized, and most of the companies that were voluntarily labeling stopped within a decade, citing high costs of auditing and low consumer demand.

Then, last year, Greta Thunberg sailed to America as voluntary offsetting hit a seven-year high and nearly 100 companies pledged to slash their greenhouse-gas emissions at least to levels in keeping with the Paris Climate Agreement.

Was it time to reconsider carbon footprint labeling?

One of the world’s largest manufacturers of vegetarian meat substitutes, Quorn will begin posting the carbon footprints of its 30 top products online beginning Thursday, with physical labels will showing up on some products in June.

The “farm to shop” carbon footprint is calculated by the Carbon Trust, which created the labeling program in 2006. Carbon Trust research in 2019 found that two-thirds of consumers support the idea of a recognizable carbon label to demonstrate that products have been made with a commitment to measuring and reducing their carbon footprint.