On paper, Cambodia stopped issuing logging concessions in 2001 and instead began promoting sustainable agriculture on degraded lands. That program now covers about 14% of the country, but a Forest Trends investigation shows that a staggering 80% of that “degraded” land is in protected areas and national forests. 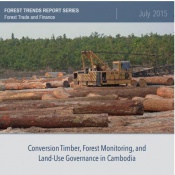 19 August 2015 | Cambodia is home to some of Southeast Asia’s oldest and most biodiverse forests, but it’s losing them at a rate of about 208,000 hectares (an area twice the size of Hong Kong) a year – largely because the government is granting concessions for rubber plantations and other large-scale agriculture on national forests, according to an investigation by Ecosystem Marketplace publisher Forest Trends. On paper, these tracts are intended to support agriculture, but the report finds that they often serve as de facto logging concessions – despite the fact that the government officially stopped issuing such concessions in 2001.

The report, entitled Conversion Timber, Forest Monitoring, and Land-Use Governance in Cambodia, shows that these concessions, known as Economic Land Concessions (ELCs), reached 2.6 million hectares at their height in 2013, and that nearly 14% of the country was allocated to domestic and foreign corporations for large agro-industrial plantations and other developments. Of that, a staggering 80% was found to lie within protected areas and national parks.

Ironically, the ELC was conceived as a progressive departure from the country’s former land-use policies and institutions. The history of logging in Cambodia is closely tied to the history of the country’s protected area system – both stories are fraught with setbacks that have carried severe ecological consequences. As The Cambodia Daily recounts, the protected area system traces its origins to wildlife reserves established under French colonial rule. The Cambodian government controlled these from 1953 until the 1970s, when the Khmer Rouge abolished the system during an infamous reign marked by both genocide and environmental degradation. Reinstituted and expanded in the 1990s with a more deliberate eye toward conservation, the system fell largely under the purview of the Ministry of Environment.

But outside those protected areas, the landscape remained bleak. Logging concessions issued by the government during the decade resulted in widespread deforestation prior to a moratorium in 2001. The years that followed witnessed a flurry of laws and regulations to address land use and environmental protection, including the creation of the ELC. This new model was designed to support agricultural development, and provided for companies to clear degraded or marginal land to make way for those developments. The concession type was accompanied by what, on paper, appears to be a robust set of requirements: for example, every application must include an environmental impact assessment (EIA) and local community consultation.

Fast forward to 2015 and, sadly, it appears that the new system is just as broken as the old one, leaving an institutional vacuum and vast opportunities for exploitation. Since mid-2004, the “conversion timber” purportedly harvested while developing agriculture on ELCs has become the main source of wood in Cambodia, along with timber illegally harvested from lands adjacent to them.

Connecting the dots, the new Forest Trends analysis suggests that the seemingly robust safeguards of the ELC application process are regarded as bureaucratic formalities, and compliance is exceedingly rare. The report used fire reports based on NASA satellite imagery to demonstrate that carbon emissions from evergreen forests cut inside ELCs are almost 10 times higher than those outside the agricultural concessions, indicating that these forests are older and healthier. Moreover, the extent of valuable dense evergreen forest is disproportionately high in those concessions that are located within protected areas.

These findings suggest that corporations are targeting the country’s last remaining high-value forests. They challenge the government’s claim that ELCs are allocated on degraded lands whose forests are not worth conserving or restoring, and lend weight to the accusation that ELCs are being used as if they were logging concessions. Unlike its predecessor, the ELC system is even more harmful because it allows commercial logging to expand into protected areas.

Highlighting the Need for Systemic Change

The impact of these land concessions on forests extends far beyond the borders of these massive tracts. Apart from representing an institutional failure on its own, the ELC system serves as an indictment of other governmental structures geared toward forest conservation, including protected areas designations. “Conversion timber harvesting is circumventing and even contradicting existing natural resource legislation,” the report said, concluding that the opaque ELC allocation process results in “a patchwork of different regulations being seemingly arbitrarily applied by the authorities.” The Ministry of Environment (MoE) is responsible for much of the nearly 550,000 hectares of land concessions that are allocated within official protected areas. The report contends that this loophole undermines the purpose of the Law on Protected Areas – which does not provide for the legal development of large-scale plantations – and undermines Cambodia’s forest and protected area management in general.

Although it paints a desperate picture, the report is not all doom and gloom. Forest Trends outlines a series of recommendations in order to achieve a legal, sustainable timber supply that accommodates the conservation of Cambodia’s forests. The group proposes a moratorium on logging and timber transportation in ELCs and Social Land Concessions (SLCs) until minimum requirements for transparency and rule-of-law are established. The report also urges the national government to conduct an expedient review of land concessions to determine which developments comply with Cambodia’s existing laws and regulations. By rewarding legitimate agriculture that is practiced within existing laws – and penalizing producers that harvest natural forests under false pretexts – the hope is that the government can create a compelling incentive for better land-use planning and, ultimately, sustainable forestry practices.

William Tucker is the Senior Communications Associate at Forest Trends. He can be reached at [email protected]