The inland marshes that provide half of California’s drinking water and support its massive agriculture sector are sinking into the ground and drowning in fertilizer running off from farms. They’re also emitting massive amounts of carbon dioxide, contributing to climate change. Here’s how that could be the key to their salvation. 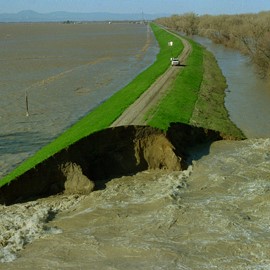 3 May 2017 | Fifty miles inland from San Francisco, cows are grazing on lush grass, and small purple flowers seem to pop out of every bush. In the distance, a sailboat glides across the treetops – and it’s not a mirage.

It’s because I’m looking up.

This idyllic farmland is twenty feet below sea level, on a sinking island called Twitchell – one of many in the Sacramento-San Joaquin Delta, where the Sacramento and San Joaquin Rivers converge.

This region provides most of California’s drinking water, but the marshes have mostly been drained, and colossal earthen dikes now loom over lowland farms, guiding massive amounts of water towards the coast in man-made streams that crest above the roofs of farms that now cover most of the delta’s 738,000 acres.

Farming here is a double-edged sword. As farmers churn up the peat soil to dry it for planting, the carbon in it reacts with oxygen in the air to form the greenhouse-gas carbon dioxide (CO2), which is soon gone with the wind, along with the soil. Because soil keeps disappearing, farmers keep digging it up, and the islands keep sinking – threatening both their own livelihoods and the entire state’s drinking water if those levees ever give way on a big scale. They do, in fact, fail occasionally.

“The farmers in this area can see the threat,” says Steve Deveral, who runs a water-management consultancy called HydroFocus. “They wake up in the morning and see water that’s over their head.”

What they don’t see are the invisible greenhouse gasses that emerge from the delta and drive climate change. Yet those gasses may, ironically, be the region’s salvation – if people here can tap carbon markets to finance a complete restructuring of the way it manages its land.

To do that, however, they must first develop something called a “carbon methodology”, which is a set of rules for building carbon offsets, and that’s no easy task. A carbon methodology begins by quantifying not just the emissions, but man’s impact on the emissions and the impact of various activities.

That’s where Deveral and HydroFocus come in.

They spent the last four years working with administrators from the Sacramento–San Joaquin Delta Conservancy, scientists from the University of California Berkeley, consultants from Tierra Resources, and the American Carbon Registry (ACR) to develop a carbon methodology tailored to this region.

The ACR has historically developed methodologies for voluntary offset projects, and now it also helps projects become eligible for California’s carbon trading program. Last week, it approved a methodology that will make it possible for landowners across the delta to earn money by “rewetting” parts of their land.

Governmental agencies and NGOs have already said they hope to tap the new mechanism, but it’s not clear farmers will want to fill in some of the swamps their ancestors spent the last century draining.

From Gold Rush to Farming Bonanza

The drainage began shortly after the 1849 Gold Rush, which drew hundreds of thousands of prospectors to the San Francisco area. Most failed to find gold, and many of those who stayed began draining the marshes – a back-breaking effort that required the digging of irrigation canals and the forming of sediment into more than 1000 miles of levees to hold back the water, creating over 60 dry islands. Then they planted crops in the thick, rich peat.

Soil from wetlands is a bit different than soil you might encounter in your garden. Since the soil is constantly covered in water, it receives less oxygen and stores more carbon. To dry the soil, farmers drained it and exposed it to air before planting, which leads to that process we described above – technically called “oxidation” – that creates CO2.

Parts of the soil literally disappear during this process, meaning that farmers dig a little deeper each year and oxidize more soil.

“Great big bowls just sitting there,” says Campbell Ingram, who runs the Sacramento-San Joaquin Delta Conservancy, which is a state agency charged with restoring the delta’s degraded ecosystems – a restoration that often means rewetting swamps by leveling the levees and filling the drainage ditches.

Twitchell island is one of many “bowls” in the delta, just waiting to be filled. And that brings us to the second problem.

As farmers planted and harvested crops over the years on the delta’s islands, the state government tapped the delta’s freshwater water to quench its thirst. Today, water diverted from here supports much of the state’s $27 billion agricultural sector, and more than 22 million people rely on the Sacramento-San Joaquin Delta for drinking water, while the mingling of freshwater from the rivers and saltwater from the sea supports the West Coast’s largest estuary.

But all this has come at a price: by diverting freshwater, more and more water can creep in from the sea. At the same time, many of those levee-protected islands are now more than 20 feet below sea level. If the levees break, the islands will drown, and the state’s drinking water can suffer unprecedented levels of contamination from seawater pulled even further inward into the delta.

Despite the manpower, he says, it would only take one catastrophe – an earthquake, an intense storm, or rising sea level – to upset this delicate balance and create a saline inland sea.

That’s where wetlands can help tip the balance: they can reverse subsidence, the gradual land sinkage.

Managed wetlands deposit dead plants on the bottom of the water, adding up to three centimeters of soil per year. They are, however, neither easy nor cheap to create, which is why local authorities started looking to carbon markets.

Those offsets can then be sold to people and companies looking to reduce their carbon footprints – initially through the voluntary carbon market, and perhaps through the state’s cap-and-trade program, under which power plants and oil refineries are required by law to reduce or offset their emissions.

The idea started in the 1990s, but gained traction in 2008, when California passed the legislation that governs its cap-and-trade program.

In 2013, a Louisiana company called Tierra Resources received approval for a wetlands methodology that it’s now using to restore degraded marshes in the bayou, inspiring the Delta Conservancy to begin pushing for the creation of a similar methodology in California.

The Conservancy partnered with HydroFocus, which developed the procedure in cooperation with the University of California at Berkeley and Tierra Resources. Funding for the methodology was provided by the Sacramento Municipal Utility District (SMUD), the California Coastal Conservancy, the Metropolitan Water District and California Department of Water Resources (DWR).

With the help of data collected by UC Berkeley and the US Geological Survey over the last twenty years, Deverel and his team estimated that each acre converted to wetlands keeps about five tonnes of CO2 out of the air per year compared to those acres kept for agriculture.

New carbon methodologies always take time to develop because the science needs to be solid. But “this is one of the most lengthy and complex methodologies we have,” says Margaret Williams, the program officer at ACR responsible for helping the delta methodology gain approval.

Fortunately, because the delta is so important to California, it’s been the focus of intense research that’s yielded reams of data; but the teams still had to conduct exhaustive site-sampling and build pilot wetland restoration projects to collect data specific to the methodology.

Now, Deverel and Ingram hope to use the methodology for a real project that will generate verified offsets. That will mean first identifying a site, then coming up with a plan, and finally bringing in third-party auditors to validate the plan and verify the results.

They’re currently looking at public lands as well as some owned by non-profits, but they’ll need the participation of private landowners to really get the job done.

“We eventually want to include farmers,” says Ingram, “but they’ll need to see these public projects in action for a few years first.”

Only if it works in the voluntary markets will it be adopted by the cap-and-trade program, but Deverel is optimistic

“The Delta is emblematic for water problems throughout California,” he says as we walk along a narrow wooden plank, erected at the beginning of the first wetland he helped restore. The path is almost overrun by nature now, and cattails and tules that began to emerge after rewetting 20 years ago now reach far over my head.

He leans down to scoop up some soil. It’s a goopy black, saturated with water. This is soil that won’t oxidize upon contact with the air – it’s too wet.

“The fact that [the delta] is broken necessitates change,” he says. “And the methodology can be a vehicle for that change.”

One thought on “Can California Tap Carbon Markets To Save Its Delta (And Its Drinking Water)?”