President-elect Biden has vowed to make climate change an integral part of his administration, involving Departments of Energy, Transportation, and Agriculture. Former Secretary of State John Kerry’s job will be to ensure that integration,. 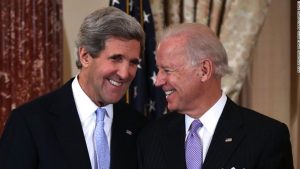 23 November 2020 | US President-elect Joe Biden on Monday said he would nominate former Secretary of State John Kerry as Special Presidential Envoy for Climate. The announcement was made on the page of the Biden administration’s transition web site dedicated to cabinet-level appointees.

As Secretary of State, Kerry negotiated and signed the Paris Climate Agreement in 2015, and last year he launched “World War Zero,” which is a bipartisan organization dedicated to achieving net zero greenhouse-gas emissions in the United States by 2050, in line with the Paris Agreement.

Biden had previously vowed to coordinate climate strategy across the government, and Kerry will be charged with implementing that strategy.

“America will soon have a government that treats the climate crisis as the urgent national security threat it is. I’m proud to partner with the president-elect, our allies, and the young leaders of the climate movement to take on this crisis as the President’s Climate Envoy,” Kerry wrote on Twitter.