Dozens of companies and scores of governments won greenie points at last year’s UN Climate Summit for endorsing the New York Declaration on Forests and aiming to end deforestation. On Wednesday, at Climate Week NYC, we get to learn how they are progressing one year on. 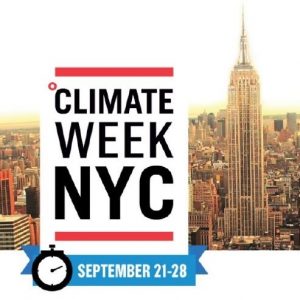 21 September 2015 | NEW YORK | Climate Week NYC kicked off here today and runs through September 28, with more than 150 events scattered across the city and a Friday visit from Pope Francis. You can bet that companies will step up with promises to save the planet, as 53 of them did last year when they endorsed the New York Declaration on Forests, but how do you know which promises are being kept, and which are just words?

If you’re in New York, you’ll get two chances for at least some answers this week, as Forest Trends’ Supply Change project offers findings from its analysis of companies that endorsed the Declaration (a text of which is available here). The Supply Change findings will be released on Wednesday at 8am, in a report entitled “Firm Commitments: Tracking Company Endorsers of the New York Declaration on Forests”, and the release will be followed by two events offering a deeper dive into the implications.

The first event takes place on Wednesday, from 10am to 11:30am at the offices of Hunton and Williams (200 Park Avenue, #53) and is entitled The New York Declaration on Forests: One Year of Business Progress and the Pathway to Paris. Key business and civil-society actors on deforestation will discuss the progress made to date and the role of corporate leadership and collective action as well as the potential for forests to feature at the heart of a strong climate agreement at year-end climate talks in Paris – and what must to be done to turn this potential into reality.

The second event takes place a day later, on Thursday, from 10am to 12noon, at the Rainforest Alliance Headquarters (233 Broadway), and is entitled Report Launch – Firm Commitments: Tracking Company Endorsers of the New York Declaration on Forests. Forest Trends’ Ecosystem Marketplace will present detailed findings from the report with discussions from other topic experts on these and other implications of the Declaration to advance transparency in the implementation of deforestation-free commitments.

Supply-Change.org tracks nearly 300 companies that have made commitments to reduce deforestation from their supply chains, and the New York Declaration on Forests includes commitments from 53 corporations – as well as 37 national governments, 20 sub-national (state) governments, 16 indigenous organizations, and 54 environmental groups (including Ecosystem Marketplace publisher Forest Trends). The endorsers set a goal to halve deforestation by 2020 and to eliminate all deforestation by the year 2030. Commercial agriculture is particularly key since is drives at least 70% of tropical deforestation, with production of soy, palm oil, timber and pulp, and cattle being the “big four” commodities.

“Firm Commitments” looks at who the 53 company endorsers of the Declaration are and then focuses in on the performance of 41 companies – primarily name-brand food retailers and manufacturers based in developed countries – which have been profiled on Supply-Change.org. The report examines what concrete steps they’re taking towards fulfilling their pledges and how they compare to companies that haven’t endorsed the Declaration.

We also look to see which of the “big four” commodities are getting greener, and which aren’t. Then we assess the correlation between sustainability and other practices, such as support for human rights, peatland protection, and transparency in supply chains.

The sessions are open to the public, and the report will be available for download on Wednesday at 8am Eastern time at http://forest-trends.org/releases/p/firm-commitments.

One thought on “Are Companies Keeping Their Climate Pledges? Find Out Wednesday In New York.”