War-torn countries need money, but illegal timber purchases often end up fueling warlords and accelerating conflict. A new analysis shows that European countries are importing more and more timber from 35 countries listed as fragile and conflict-related, and that much of that timber could be illegally-harvested. 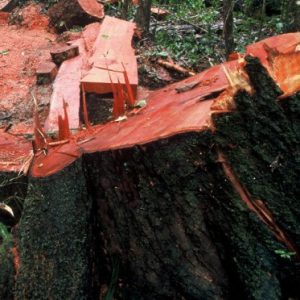 This story is cross-posted on the Forest Trends blog.

19 July 2017 | EU timber imports from conflict countries, which are at high risk of being illegal, have increased 14 percent, despite the European Union’s Timber Regulation (EUTR) legislation’s requirement that companies ensure that only legal timber enters the EU market, according to a new Forest Trends report.

The Forest Trends brief analyzes 2015 trade data reported by European governments (the most recent full trade data available). It finds that across the EU, import levels of timber from conflict countries differ significantly, but have been rising steadily in at least 12 of the 28 EU member countries since 2010. Overall, the top European importers of timber from fragile and conflict-affected states are Italy (29% of EU trade since 2000), France (16%), Spain (15%), Belgium (9%), and Germany (6%).

The new analysis lists imports into the EU from 35 countries identified by the World Bank as fragile and conflict-affected states. The timber from these conflict countries is at high risk of being illegal or obtained from questionable sources due to the political instability, weak governance, and violence inherent to these areas.

The primary fragile and conflict-affected producer countries from the World Bank list supplying the EU are the Ivory Coast, the Democratic Republic of Congo (DRC), Myanmar, Central African Republic (CAR), Liberia, Madagascar, Papua New Guinea (PNG), Togo, Syria, and Lebanon. The total reported value of EU imports from these countries in 2015 was €178 million (from €156 in the previous year), fueled particularly by the reopening of trade with Myanmar following a period of sanctions. Notably, imports from Syria have decreased significantly since the start of the Syrian Civil War in March 2011.

The EUTR requires European companies to assess the risk of illegal timber entering their supply chains and put in place strategies for mitigating that risk. This is challenging in any country with significant illegal logging and public sector corruption or fraud, but is even more difficult in conflict situations where there is not one uncontested government with a clear mandate to legislate the production of timber in all areas. In the absences of clear laws, it is very difficult to judge whether the timber trade complies with them.

The new analysis also explores the impact certain EU timber importers have on the trade from certain countries on the World Bank list. For example, in 2015, Belgian companies bought 40% of the Democratic Republic of Congo’s sawn wood exports, and Greek companies sourced 70% of all the DRC’s veneer. French and Portuguese companies bought a quarter of all of Central African Republic’s log exports. Using the EUTR to ensure responsible legal trade in these commodities has the potential to support peaceful development and growth.

However, even when complying with the EUTR, timber importers remain vulnerable to reputational risk in a situation which requires them to negotiate unclear political mandates and contested laws. Tackling this problem is outside the mandate of timber regulations such as the EUTR, the US Lacey Act, and the Australian Illegal Logging Prohibition Act, but it remains critical to claims of legitimacy by the timber trade. As a result, companies trying to source timber products responsibly sourced from fragile and conflict-affected states must go beyond ensuring legality in order to make sure that they “do no harm.”

Despite these risks, responsible global trade in legal forest products can be an effective way to create rural jobs and stabilize economic conditions in which growth and peace can occur in states emerging from conflict. Just last month the U.N released a detailed report reminding the world of the scale of conflict, violence, and human rights violations in war-torn Central African Republic. It called for a re-energized political process to achieve lasting and secure peace and thus avoid repeating cycles of conflict. Forest Trends believes that “do no harm” responsible trade, together with legitimate, transparent governance of natural resources and the revenues associated with them, is a fundamental prerequisite of achieving economic growth and lasting peace.

Jade Saunders is a Senior Policy Analyst at Forest Trends. She has been an Associate Fellow of the Energy, Environment and Development Programme at Chatham House since 2002, working extensively on forest governance.

Marigold Norman is a Senior Advisor to the Forest Policy, Trade, and Finance Program providing strategic advice and support to the Timber Regulation Enforcement Exchange (TREE), an initiative seeking to enable robust and consistent enforcement of demand-side timber regulations.