When it comes to global warming, major media tend to focus on industrial emissions, but agriculture is still the world’s leading driver of climate change, which in turn can decimate the world’s forests, farms, and fields – putting our entire food supply at risk. Here’s a primer on the tumultuous relationship between food and climate, and how we can make that relationship a happy one. 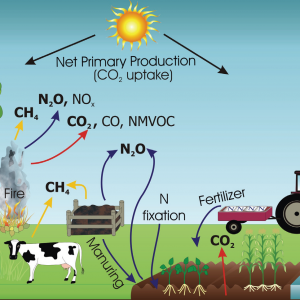 This story has been adapted from “Feeding Climate Change: What the Paris Agreement Means for Food and Beverage Companies.”

27 September 2016 | For the first time, the 2016 World Economic Forum’s global risks report ranks the failure of climate change mitigation and adaptation as the most impactful risk to countries and industries, with water crises coming third. Agriculture is undoubtedly one of the most climate-sensitive sectors. The Fifth Assessment Report of the Intergovernmental Panel on Climate Change (IPCC) showed that climatic changes over the last 30 years have already reduced global agricultural production in the range of 1–5 percent, and that extreme weather events affecting major agricultural producers have helped to drive global food price volatility in recent years.

Cimate Change is a Major Treat to the Global Food System

The report confirms that developing countries will continue to be hit hardest as climate change gathers pace – the very same countries from which many food and beverage companies source their raw ingredients. For example:

Across the world, farmers face decreasing yields and need larger areas for production, forcing the price of commodities to rise. A new study on the Brazilian state of Mato Grosso, which as of 2013 supplied 10 percent of the world’s soybeans, found that a temperature increase of 1°C will lead to a 9–13 percent decrease in soy and maize production, largely due to farmers putting less land into production or only planting one crop at a time.

The IPCC Fifth Assessment Report showed that climate changes over the past 30 years have already reduced global agricultural production in the range of 1–5 percent.

In the Brazilian state of Mato Grosso, responsible for supplying 10 percent of the world’s soybeans, a temperature increase of 1°C could lead to a 9– 13 per cent decrease in soy and maize production.

Higher temperatures will increase heat stress among livestock and, where combined with decreases in precipitation, will reduce the amount of water available for irrigation. The increase in the frequency and/or severity of extreme weather events will be particularly damaging to smallscale farmers and people living in or at risk of poverty, because they generally lack access to social safety nets.

Price volatility is especially damaging to small-scale food producers, whether prices are too low when harvests are good or too high in times of scarcity and when disaster strikes. Any decreases in production in such circumstances affect both levels of income and food consumption.

Oxfam’s experience shows that when farmers lose income they often resort to selling assets such as livestock, taking children out of school or cutting down on medical expenses. Without a safety net, small-scale farmers and their families lose the ability to achieve a decent livelihood or invest in their farm’s future, and are more likely to experience malnutrition and hunger.

Women farmers are more vulnerable to climate change impacts than men because they are often more dependent on climate-sensitive livelihoods such as rainfed agriculture and collecting water for household use. They also have unequal access to productive resources such as land and agricultural inputs, and have less of a support system to fall back on in times of crisis.

In countries where a significant proportion of household budgets are spent on food and many people are dependent on agriculture, the social and economic consequences of climate-related production changes and price shocks can have disastrous implications for the wider economy.

These increased risks faced by small-scale food producers are increasingly reflected in the bottom lines of the world’s biggest food and beverage companies too. For example, in 2010 – a year of extreme weather in many parts of the world – several companies experienced production shocks and financial losses that could be attributed to the changing climate. For example:

The Food System is a Major Driver of Climate Change

As well as being acutely vulnerable to changes in the climate, the global food system is itself a significant driver of climate change, contributing about a quarter of the world’s GHG emissions (see Figure 1).

Agriculture is both a primary driver of deforestation globally, and accounts for the largest share of non-carbon GHGs (about 56 percent in 2005). These ‘super pollutants’ like methane and nitrous oxide – which have a higher global warming potential although are emitted in smaller quantities than carbon dioxide – are driven by emissions from livestock, manure added to pasture, the use of synthetic fertilizer and paddy rice cultivation.

Note that, while livestock are a major source of methane emissions in agriculture, the study commissioned from CE Delft for this paper focuses instead on the often overlooked contributions of major agricultural commodities to GHG emissions.

While the public and political debate on climate change has traditionally been dominated by players in the energy and energy-intensive industries, this is starting to change. As one of the sectors most at risk from climate change, food and beverage companies have a clear business interest in early and effective action on both mitigation and adaptation. As an industry with such a sizable emissions footprint and one that relies on millions of farmers and agricultural workers in regions that are already being significantly affected by climate change, the sector also has a major responsibility to play a prominent role in fighting climate change. The stage is set for food and beverage companies to lead the way in defining the post-Paris agenda for corporate climate action on both mitigation and adaptation.

Suhardiyoto Haryadi is a professor of foresry at the Center for Biodiversity and Tropical Forest Rehabilitation, Bogor Agricultural University (IPB)

2 thoughts on “How Food Production And Climate Change Are Intertwined”