It’s been a tumultuous decade for deforestation – one that culminated with a global pandemic and fires around the world. But there have been successes that we can replicate and build on to reach zero net deforestation by 2030. 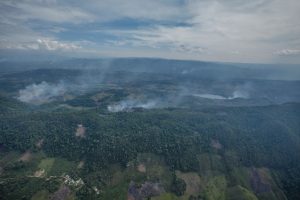 12 January 2021 | We can all agree that forests are important for the survival of humanity. In addition to sucking carbon dioxide out of the atmosphere, they provide a slew of unappreciated services: from supporting pollination of 75 percent of global crops, providing firewood for 880 million people, capturing water, and acting as habitat for endangered species.

Most current deforestation takes place in tropical developing countries, but it’s fueled by our developed world appetite for commodities such as beef, soya, palm oil, and avocados, which together account for 40 percent of all deforestation, according to the Food and Agriculture Organization’s (FAO) most recent State of the World’s Forests report. Even our shift to renewable energy is contributing to deforestation by fueling demand for minerals such as lithium.

While it’s easy to get depressed, there has been plenty of progress the last decade to turn forests into a sink, rather than a source of carbon emissions, while continuing to provide for the livelihoods of local communities. The devastating impact of zoonotic virus pandemics such as COVID 19, which are caused by human encroachment on natural habitats, might make 2020 a turning point to increase awareness and accelerate action to protect the remaining forests that are vital for a healthy global ecosystem.

Although the headlines have been grim, and deforestation is increasing in some areas, such as the Amazon, overall deforestation rates globally have decreased in the last decade compared to the 1990s and the 2000s – from 15 million hectares per year in the period 2000-2010, to 10 million hectares per year in 2015-2020.   Around half of the world’s forests are still relatively intact (49 percent) and 18 percent are legally protected, according to the FAO. 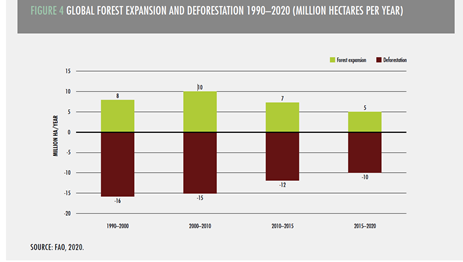 The FAO report further tells us that the geographical spread of deforestation is not equal, with net forest gains made in Asia, Europe and Oceania, and a decrease in deforestation in the last decade compared to the previous, in South America, Asia and Europe.  Note that these are aggregated country level datasets, and deforestation rates will vary from country to country. 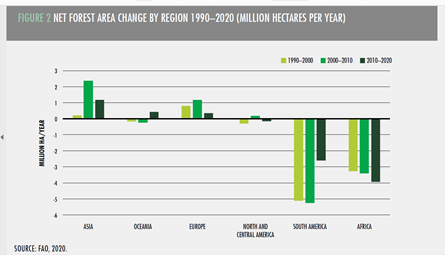 When I started working in forest and climate change policy back in 2010, international negotiators at year-end climate talks in Cancun (COP 16) had just agreed that developing country governments who implement activities to reduce emissions from deforestation and degradation (REDD+) should submit a national forest emissions reference baseline. This will be used to measure performance and receive payments for results to unlock $36 billion in funding committed by international and domestic finance to conserve forests.   Although progress has been slow and few countries have yet to receive payment for results, so far 50 countries have submitted an emissions reference baseline, which covered over 70 percent of all forests in 2018.

The importance of forests and REDD+ was highlighted in the landmark 2015 Paris Agreement, where 73 developing countries identified forest and land use as a key mitigation element in their nationally determined contributions submitted under this agreement.

As of 2018, five countries have submitted Biennial update reports to the UNFCCC, which has amounted to emission reductions 6.3 billion tons of  MTCO2eq, which is around the United States’ total greenhouse gas emissions in 2018.

More than 473 companies have committed to end deforestation in their supply chains through the Consumer Good Forum (CGF) and 2015’s New York Declaration on Forests (NYDF). Although signatories to NYDF as a whole missed the target year 2020, the pledges sent a strong market signal to improve accountability and transparency in the commodity sectors.   Progress has been made by the cocoa, soy and palm oil sector in particular to certify products to ensure that commodities are not continuing to encroach on forest land. The soy moratorium Brazil has shown to correlate with reduced deforestation rates in the Amazon.

A law has been proposed in the UK to make companies accountable for their supply chain and prove that the commodities they trade come from legal sources.  Although this would only cover a small number of large businesses, if approved, this law could set precedence for other countries to pass similar laws and for companies to improve traceability and accountability in their supply chains.

Governments, companies and citizens have better information on forests than ever before, thanks to the rapid technological progress made in the availability and scale of satellite imagery, machine learning algorithms, image processing and automated classification. This has greatly improved the timeliness, scale and accuracy of land cover maps, which are being made available to anyone with internet access thanks to cloud- based information platforms. This progress has been evident through projects such as Forests 2020 that I have been collaborating on over the last four years. However, as a recent article in the Economist pointed out, artificial intelligence has its limits and a key finding from the project has been that improved human skill both in developed and developing countries play a vital part in classifying, validating and calibrating maps to ensure high accuracy.

We now have the tools to monitor the impact of policies, programmes, and supply chains on forests, we just need the political and corporate will to do some deep introspection and implement the necessary changes needed to adjust policies and investments.

The conversion of forests to pasture for cattle is one of the leading causes of deforestation globally, especially in Latin America.  Pasture is then often converted to soy production, which is also used for animal feed, primarily pork.  Meat consumption has reduced during 2020, mainly due to fewer people dining out (where people tend to eat more meat), temporary closure of meat packing factories and reduced purchasing power.  According to FAO, beef consumption had already been reducing gradually since 2019, generally being replaced by increased consumption of chicken, which is better for the climate, as beef production emits four to eight times more emissions than pork or chicken.

The number of vegans in the UK has increased six-fold from 150,000 in 2006 to 600,000 in 2018, according to the Vegan society.  The meat free food industry is now worth £740 million in 2018, up from £539 million only three years earlier.  A vegan diet might not be for everyone, but more people are reducing meat consumption through “flexitarian” diets as well, and challenges such as Veganuary.

Although I have listed some of the positive outcomes of the last decade to put a brake on deforestation, many 2020 targets such as halving natural forest loss by 2020 compared to 2014 and achieving deforestation free supply chains by 2020 have been widely missed. We are still far from the goal of increasing forest area by 2030, due to a variety of complex reasons, some of which are described below.

Although globally deforestation rates have slowed, Brazil hit the headlines this year with a surge in deforestation of 9.5percent compared to the previous year, to 11,088 km2 from 2019 -2020.  This is linked to the current president Bolsonario rolling back environmental protections and encouragement of mining and agricultural activities in the Amazon, which has undone the progress made in the last decade when deforestation was reduced from 27,500 km2 in 2004 to 6,200 km2 in 2011 (the size of Devon).

Likewise in Colombia, deforestation hit an all-time high in 2017 when 5425 km2 was deforested, due to the Peace deal with the FARC leading to land grabbing and clearing for cattle in previously inaccessible areas in the Amazon.  It has now dropped to 1589km2 in 2019, but it illustrates how wider political processes can have an enormous impact on deforestation rates.

There are arguments that forest protections are being rolled back by developing country governments in response to the pandemic, in an effort to stimulate their economies (NYDF, 2020) and preliminary data show that deforestation in the global tropics might have increased during the pandemic compared to previous years.  However, more accurate data takes time to process so a more detailed analysis will not be ready until 2021.

Current planned Infrastructure investments such as dams, mines and other infrastructure total $777 billion globally which often adversely impact forests and communities living in them, making investments to keep forests standing look miniscule. Decisions are more than often made top-down and behind closed doors – even though these infrastructure projects are vital to alleviate poverty in some cases, a more integrated and participative approach is needed to plan developments to take into consideration the forests and communities that live in them.

Despite 78percent of companies making commitments to stop biodiversity loss, only 23 out of 225 companies (10percent) reported on their progress to meet goals and generally performed poorly. Many companies were not willing to shoulder the cost of changing production practices to become more sustainable while meeting market demand (TFA, 2018).

Excluding suppliers that deforest through commodity certification will not be enough to stop deforestation – more technical and financial support is needed for smallholders that make up the bulk of the complex supply and to prevent leakage to other regions that are not covered by commitments.  For example, although 65percent of global production of palm oil has committed to deforestation free certifications, in Malaysia and Indonesia, only a third of all production is covered by these commitments.

It seems that while companies are eager to sign up to commitments to greenwash their corporate image, few are able to implement the necessary changes and bear the costs of changing their production practices.   Although some important steps have been made in the commitments made by companies to reduce deforestation in their supply chains, there is an urgent need to link to larger scale regional wide agreements, involve smallholders and link efforts to public sector programs.

Even though there has been some progress made in the last decade to build the right tools, policies and frameworks to slow deforestation, it is a complex process that is influenced by many political, social and economic factors.  As consumers and citizens, we can put pressure on companies and governments to ensure that the products we consume and the infrastructure projects our taxes pay for, don’t continue to fuel deforestation.  However, we need a wider change in the development paradigm to ensure that forests are valued for the protection and benefits they bring.

We have more and better information to hand than ever before, so there is no longer an excuse for inaction.

Let’s hope 2020 marks the turning point in the next decade!

Felicia Line is a consultant specialized in Climate Change and Forest policy based in Chiapas, Mexico. She is currently working as a Monitoring and Evaluation coordinator in Mexico and Colombia for Ecometrica as part of the Forests 2020 project, supported by the UK Space Agency.

This story is adapted from a piece she wrote on her blog.