What’s needed to make this time different? WRI finds what emissions benefits would occur if all countries made good on their commitments to combat and reverse forest loss. 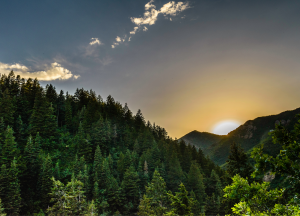 12 November 2021 | Dubbed the “Nature COP,” forests were front and center throughout the UN climate summit (COP26) this year. Among the first and most significant announcements made at COP26 was the Glasgow Leaders’ Declaration on Forests and Land Use, in which 137 countries committed to collectively end forest loss and land degradation by 2030.

This pledge was followed by scores of forest-related announcements — including significant funding commitments from countries and foundations to support conservation of tropical forests, the communities best positioned to steward them, and the restoration of degraded land. Meanwhile, companies and investors pledged to reduce forest loss and support a transition to more sustainable land-use within their supply chains and financial portfolios.

What does this mean for forests and climate action? We walk through the numbers.

What Was Promised on Forests at COP26?

Countries signing on to the Glasgow Declaration affirmed the importance of all forests in limiting global warming to 1.5 degrees C (2.7 degrees F), adapting to the impacts of climate change, and maintaining healthy ecosystem services. They agreed to collectively “halt and reverse forest loss and land degradation by 2030 while delivering sustainable development and promoting an inclusive rural transformation,” without saying exactly what they would do to achieve this goal.

Funding pledges followed the declaration. A total of $19.2 billion ($12 billion from public sources and $7.2 billion in private financing) was pledged to help protect and restore forests globally. This included $1.7 billion to help Indigenous peoples and local communities exercise decision-making and design roles in climate programs and finance instruments.

New ways of doing business were promised. A group of 28 countries pledged to protect forests while promoting development and trade through the Forest, Agriculture and Commodity Trade Roadmap. Twelve companies with a major global market share in commodities such as soy, palm oil, cocoa and cattle, also committed to halt forest loss associated with agricultural commodity production and trade.

How Could These Forest Commitments Help Achieve Global Climate Goals?

A rapid reduction in forest loss is critical to preventing irreversible biodiversity loss and securing the rights, livelihoods and cultural heritage of the Indigenous peoples and local communities who live in and around forests vulnerable to deforestation. Forests also play a massive role in the fight against climate change. But what are the climate benefits to be had if all signatories to the Glasgow Declaration were to make good on their commitments?

We compared such success to a business-as-usual scenario to estimate the potential greenhouse gas mitigation impact of the Glasgow Declaration. Ending forest loss by 2030 within all the signatory countries would offer 32.8 million hectares of avoided loss and 18.9 gigatonnes of carbon dioxide equivalent (GtCO2e) in avoided emissions. That’s an area roughly the size of Malaysia and equivalent to a quarter of global greenhouse gas emissions from transportation from 2009-2018. 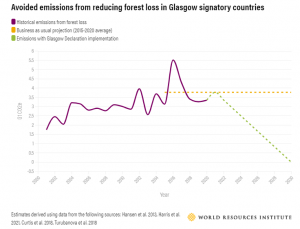 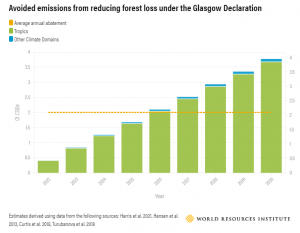 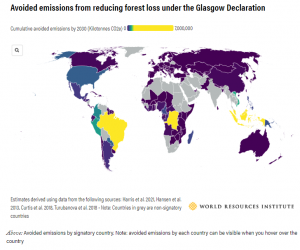 How we read the data

Tree cover includes woody vegetation with a height of at least 5 meters and a canopy density of at least 30% at a 30-meter Landsat pixel scale. Although wildfires and forestry are also major causes of tree cover loss and associated emissions, they are typically more temporary in nature and not associated with permanent land-use change. They are not considered as “forest loss” for the purposes of this estimate. Learn more about how we designate tree cover loss classes on the Global Forest Review.

This analysis does not consider overlaps with other Glasgow commitments, including Nationally Determined Contributions (NDCs) and net-zero pledges, and therefore does not make claims regarding the extent to which the avoided emissions from the Glasgow Declaration are additional to those commitments.

Ending the emissions released into the atmosphere from deforestation would be a huge climate win, but forests have even more climate potential to offer. As forests grow, they sequester more carbon from the atmosphere: Data shows that between 2001-2020, forests around the world sequestered an average of 7.3 GtCO2e per year. When these forests are removed, the carbon sink provided by them is also lost, reducing future carbon removals.

The goal of the Glasgow Declaration is not just to halt forest loss and land degradation, but to “reverse” it. Signatories pledged to strengthen efforts to accelerate the restoration of forests and other terrestrial ecosystems, but stopped short of setting a quantitative target for how much to restore. Many of the signatory countries have also made commitments under the Bonn Challenge, which has a goal of bringing 350 million hectares of degraded and deforested landscapes into restoration by 2030.

Restoration of forests, mangroves and peatlands offers great climate mitigation potential, in addition to the emissions avoided by halting their loss or degradation. To demonstrate the magnitude of this potential, here are estimates on the amount of carbon dioxide that could be removed annually from the atmosphere by 2030 from several forms of restoration (via a recent report on the transformations required to limit global warming to 1.5 degrees C):

Socially and ecologically conscious restoration will require close collaboration with communities that own or use land. Regional networks of community organizations, investors and governments — like Initiative 20×20 in Latin America and the newly relaunched AFR100 in Africa — can help to share knowledge and channel large financial commitments, such as The Bezos Earth Fund allocation of $1 billion for restoring landscapes, to local entrepreneurs and community groups working to restore land.

This Isn’t the First Pledge on Forests. What Will Make the Outcome Different?

What will prevent the Glasgow Declaration and related pledges from suffering the same fate as previously unmet forest commitments? To be sure, many of the same countries also signed the 2014 New York Declaration on Forests which pledged to halve deforestation by 2020 and end it completely by 2030. Despite some progress, the latest assessment shows signatories are still far from achieving this objective. For the Glasgow Declaration to succeed, its goals need to be embedded in new ways of doing business, and countries must feel fully accountable for achieving them.

Moving beyond a paper pledge to impact will require countries to work in concert to drive system change across all five areas of “transformative action” listed in the declaration: sustainable production and consumption; infrastructure; trade; finance and investment; and support for smallholders, Indigenous peoples and local communities, and their role in forest stewardship.

For this to happen, countries and companies must be accountable for following through on their pledges. They should develop clear implementation plans, specify measurable performance indicators, and set specific milestones of achievement on the pathway to 2030 goals. They should openly and regularly monitor, report and verify their progress. They should also be more transparent — the boundaries and owners of land-use permits or licenses should not be secret and companies should trace and disclose the origins of commodities they purchase.

While the Glasgow Declaration and related pledges are a welcome affirmation of political will to reduce deforestation and pivot to more sustainable land use, we’re watching for action.